A group of Russian, European and American scientists have found a warm layer in Venus’ atmosphere, the nature of which is still unknown. The researchers made the discovery when compiling a temperature map of the upper atmosphere on the planet’s night side based on the data collected by the Venus Express probe.

“We measured temperatures at altitudes of 90 to 140 kilometers,” says an author of the study, Denis Belyaev of MIPT and the Space Research Institute of the Russian Academy of Sciences. “On the night side of the planet, temperatures normally fall with altitude, but we noticed a peak in the chart in the 90 to 100 kilometer range. Here, the atmosphere was 20 – 40 degrees warmer than we expected. We don’t yet understand what causes the warming, but Venus’ ozone layer is at this altitude. There may be a connection.” 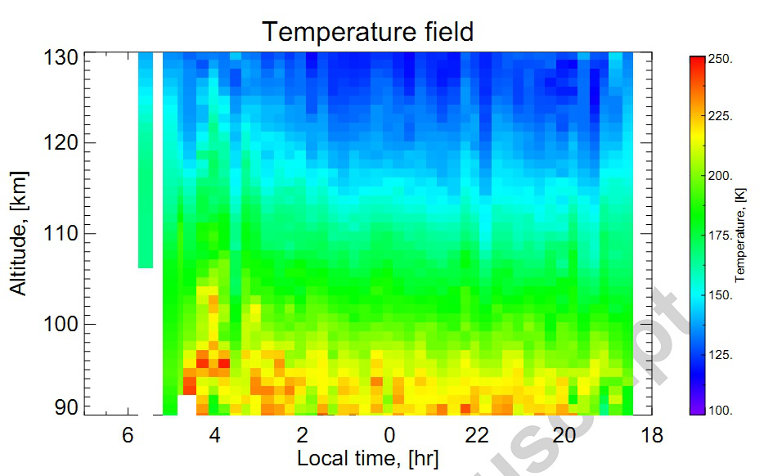 A profile of atmospheric temperatures on the night side of Venus

Belyaev, along with his colleagues from MIPT and the Space Research Institute, Anna Fedorova and Oleg Korablev, and researchers from the French laboratory LATMOS, as well as from Belgium, Germany and the U.S. analyzed the data obtained by the SPICAV spectrometer on board Venus Express between June 2006 and February 2013.

The SPICAV system (Spectroscopy for the Investigation of the Characteristics of the Atmosphere of Venus) consisted of two spectrometers, an infrared one, created by Russian specialists, and an ultraviolet one, made by French scientists. Atmospheric temperatures were taken in the UV channel using the stellar occultation method, wherein a spectrometer captures the light emitted by a star as it goes behind a planet. The starlight radiates through the planet’s atmosphere, whose characteristics can be retrieved based on the spectrum produced.

The scientists selected stars that shine brighter in ultraviolet, that is, from 118 to 320 nanometers, the working range of the spectrometer (there were a total of 50 of them). Each second within the few minutes that the star took to disappear behind the planet’s horizon the spectrometer took a shot of its spectrum. Then the scientists divided the “atmospheric” spectrum by the star’s “clean” spectrum to determine the gas composition and density of the atmosphere at different altitudes, as well as temperatures. From June 2006 to February 2013 they made 587 “shots” of the atmosphere, which covered almost the entire night hemisphere.

According to Belyaev, this layer is in the same range of altitudes where the ozone is. “We are carrying out correlation analysis to determine if these are connected or not,” Belyaev said. “We can’t rule out  that this phenomenon may be explained by chemical reactions, namely the decomposition of ozone when it comes in contact with chlorine-based substances – these reactions may result in the release of heat.”

The researchers have found yet another peculiarity of Venus’ upper atmosphere: early in the morning it is warmer than in the evening, while it should be the other way round.

Venus is a unique planet in that rotates not in the direction of its movement along the circumsolar orbit, but in the opposite direction, because its rotation axis is tilted 177 degrees. And it rotates very slowly – a solar day on the planet lasts 116 days. During the long night the upper atmosphere cools, so at night it should be warmer than in the morning.

The researchers continue to study the data collected by Venus Express, hoping to learn new information about the planet.