A bright fireball accompanied by sonic boom was seen and recorded falling from the sky over Kerala, India on Friday, February 27, 2015. The fireball left behind orange trail as it descended.

Some people reported they felt minor earthquake in many parts of Ernakulam, including Fort Kochi, Vypin, Willington Island and Kolenchery, but authorities said seismographs recorded no such thing.

There are also reports that people found strange-looking stones from Kuruppampadi near Perumbavur and Akkampara near Kolancherry, writes ManoramaOnline. An object looking like a part an aluminum pot was recovered from Poochakkal near Cherthala.

Scientists have requested people not to touch or destroy any objects that they think have fallen from the sky. Information on any such objects should be immediately passed on to police and revenue authorities, they say. 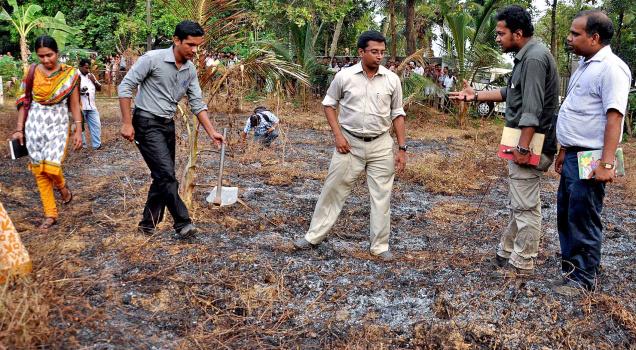 Members of the State Disaster Management Authority on Saturday inspect the site near Karumaloor where the fireball reportedly plunged. Photo: Vipin Chandran

On Saturday, reports emerged that a fire broke out at a four-cent property in Karumaloor village near Aluva after a fireball plunged from the sky. A similar incident was also reported from Velamboor in Mazhuvannur village near Perumbavoor.

“Samples have been collected from two sites–one each in Mazhuvannur and Karumaloor villages from where reports of objects falling out of the sky emerged. Preliminary assessments point to the possibility of a meteorite activity,” district collector M.G. Rajamanickam told The Hindu.

There are unconfirmed reports of another fireball seen in the sky over Pathanapuram in Kollam district on Saturday night. Scientists believe that it is a fragmented part of the meteoroid that came down on Friday.