Region 2192, the largest sunspot of the current solar cycle – Solar Cycle 24 (SC24) – has now started its farside rotation and will be remembered by ~137 solar flares (C-, M- and X-class) without any noteworthy Coronal Mass Ejection (CME). Though we covered all significant flaring from this region during its first rotation through the Earth side (October 16 – 31) in separate articles, this article will summarize its activity during last 18 days.

The fourth largest region since March of 1989 showed us first signs of its strength on October 14, 2014. At the time, the region was still beyond the east limb but its powerful eruption called for attention of solar watchers around the world.

An impulsive M1.1 solar flare (R1 radio blackout) was first observed at 18:37 UTC on October 14. The event had a 10cm Radio Burst (Tenflare) with peak flux of 1300 sfu associated but had no other CME related radio signatures. The flare appeared to have originated beyond the east limb in the vicinity of Old Regions 2172 and 2173.

A spectacular long duration M-class event followed shortly after from the same vicinity. It began at 19:07 UTC on October 14 and reached its peak as approximately M2.2 by 21:21 UTC. This event had an associated Tenflare of 180 sfu:

Region's next significant event was an impulsive solar flare measuring M4.3 at 13:03 UTC on October 16, 2014. A 10cm Radio Burst lasting 1 minute (180 sfu) was associated with the event but again, there was no significant CME.

By the time the region was fully apparent on the solar disk on October 18, it was already classified as an Fkc spot group with an area of 1240 micro-hems (millionths of solar hemisphere, 1 micro-hem = 1.53 million square kilometers). On that day, a long duration M-class solar flare measuring M1.6 erupted at 07:58 UTC.

It's first X-class solar flare erupted on October 19. It was a long duration flare measuring X1.1 which peaked at 05:03 UTC. SDO/AIA imagery of the event suggested that the bulk of the ejecta was reabsorbed or directed well south and east of the Sun-Earth line. SOHO/LASCO coronagraph imagery confirmed what was observed from the SDO/AIA spacecraft as no obvious CME was detected.

A second major solar flare measuring X1.6 at its peak time erupted on October 22, 2014. The event started at 14:02, peaked at 14:28 and ended at 14:50 UTC. A 10cm Radio Burst (200 sfu) was present, but again… analysis of SDO and SOHO/LASCO imagery suggested that there was not a CME associated with this event. The X1.6 solar flare followed the M8.7 event, associated with a 10cm Radio Burst and a Type IV Radio Emission, which peaked at 01:59 UTC that day.

Skywatchers had a special treat during October 23rd partial solar eclipse. Region 2192 was almost at the center of the solar disk:

The third major solar flare erupted on October 24 at 21:41 UTC as X3.1. This was the strongest flare this region produced during first rotation and the sixth strongest flare of Solar Cycle 24. The event started at 21:07 and ended at 22:13 UTC. A narrow CME was associated with the event and was observed in SOHO LASCO C2 imagery beginning at 21:48 UTC but was directed well south of the Sun-Earth line. 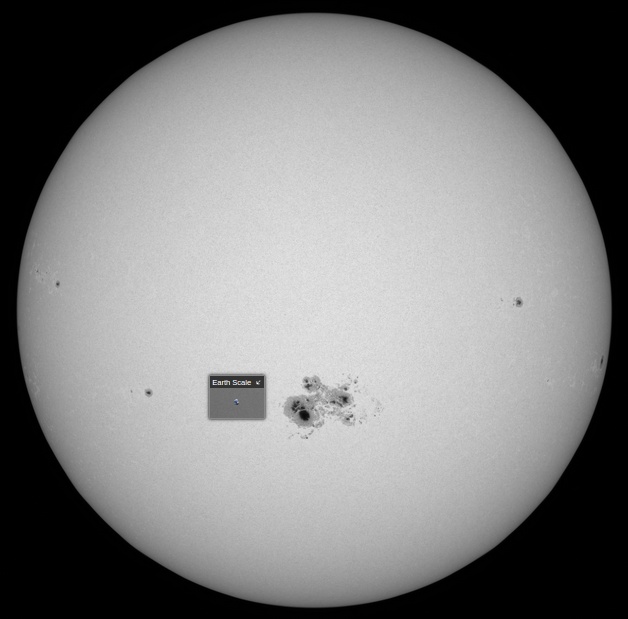 The region continued to grow and spread as it transited across the disk culminating in an area near 2570 micro-hems by October 26, all the while maintaining a complex beta-gamma-delta magnetic configuration.

Region's sixth major solar flare, and last for this rotation, erupted on October 27 at 14:47 UTC as X2.0. As with previous major eruption on 26th, CME was not produced.

Since October 17 and by October 31, when 2192 started its farside rotation, this region managed to produce:

Interestingly, none of them produced a noteworthy CME. What did get off the Sun in a narrow CME on October 24 was well off the Sun-Earth line.

On October 27, SDO's Dean Pesnell wrote on the mission blog:

I downloaded the active region dataset produced by David Hathaway at Marshall SFC and looked at the largest active regions since 1874. This area data comes from the photographs taken at the Royal Greenwich Observatory until 1976 and various sources after that. I checked the list against the tables in Sunspot and Geomagnetic-Storm Data by Sir H. Spencer Jones just to make sure. I also added two regions from 2014 (AR 12192, of course, and AR 11967). 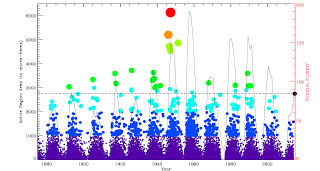 How big was the active region that was the site of the Carrington Flare? It was 2300 micro-hems, not even in the top 50! You can look it up on p. 102 of the table by Jones. The flare on 1-Sep-1859 has been estimated at X35, showing that large flares can come from medium-sized active regions.

If the region survives its farside rotation it will return to our view around November 11, 2014 when solar activity is again expected to increase to moderate (R1-R2, Minor-Moderate) and high levels.