A narrow CME was associated with the flare and was observed in SOHO LASCO C2 imagery beginning at 25/21:48 UTC but was directed well south of the Sun-Earth line.

Radio Blackout threshold reached R3 (Strong) level that can cause wide area blackout of HF radio communication, loss of radio contact for about an hour on sunlit side of Earth and low-frequency navigation signals degraded for about an hour. The main communications impacts from this event are over the Pacific Ocean.

Region 2192 has 'beta-gamma-delta' magnetic configuration and is capable of producing more strong to major eruptions on the Sun. 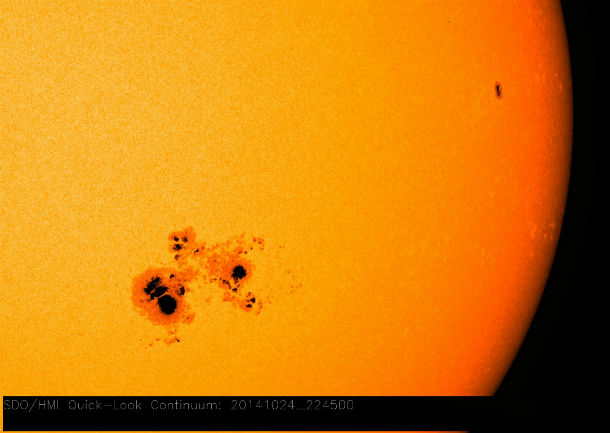 Active Region 2192 is the biggest sunspot group of the last two decades. This very complex group has an area of about 16 times the total surface area of the Earth.

SDO declared "Major Flare Watch", so the two calibration maneuvers SDO had scheduled for October 22, 2014 will be done in two weeks.

The event was not unexpected. Region 2192 was erupting before it appeared on the Earth side and continued to do so as it grew and rotated into perfect geoeffective position.

There are currently 5 numbered sunspot regions on the Earth side of the Sun. Region 2192 showed signs of separation between its leader and trailer spots yesterday although it continued to grow and remained magnetically complex. For several days in a row it is the sole source of flaring on the Earth side. All other regions on the disk are relatively stable.

NOTE: This page will be updated…