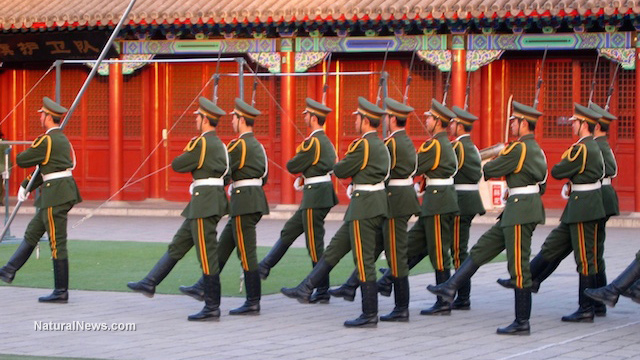 The Chinese People's Liberation Army plans to ban the use of genetically modified foods from its supply chain, making the PLA the first military force in modern history to do so.

According to multiple reports, the decision comes following the publication last month of a report in an obscure Chinese government weekly by Lt. Gen. Mi Zhenyu, the former deputy director of the Chinese Academy of Military Science.

The English translation of Mi's essay was published just recently by Chen Yiwen, a senior official with the China Association for Disaster Prevention, on Chen's verified blog. According to the translated version, Mi charged that GMO residue of soybeans that are crushed to manufacture soy oil has found its way into the diets of Chinese citizens, thereby causing birth defects, depression, infertility and a rather lengthy list of additional afflictions.

What is worse, Mi asserts, is that the fault lies with China's largest supplier of oilseed — which is a thorn in the side of China's strategic planners.

"The U.S. dumped soybeans on China due to huge subsidies for their soybean farmers, and in a few years destroyed the traditional Chinese soybean industry," Mi claimed. The Wall Street Journal (WSJ) reported that he could not immediately be reached to comment.

China's Agriculture Ministry has regularly denied claims of such "GMO leads," but Mi is just the latest military official to publicly come down on the side against GMO crops, and especially those from the United States. Last year, Maj. Gen. Peng Guangqian, the deputy secretary-general of China's National Security Policy Committee, also penned a column in which he warned that rising GMO grain imports would expose Chinese to a costly strategic error. Other top military leaders have just as publicly supported Peng.

As noted by WSJ:

The military men's positions underscore how closely GMO food is identified as a tool of Western — particularly U.S. — strategic policy, regardless of whether there's enough evidence to support the association. The broader public sentiment in China, mainly hinged on health factors, also runs against the notion of allowing GMO food for human consumption. That was the theme of the reaction to Greenpeace's claims that seven out of 15 random samples of rice sold in two markets in Wuhan tested positive for GMO strains. The non-profit said it had sent the samples to an independent testing agency.

Wuhan is the base for Huazhong Agricultural University, which is a major experimental institution for the government on GMO foods, and especially rice. School officials got into an argument with Greenpeace members last month after alleging that two employees of the activist group "stole" GMO rice seeds from somewhere on campus. A spokeswoman for the academic research institution told the Chinese daily paper Global Times that it rejects the activist organization's latest report and questioned its methods.

But China's bloggers were more apt to quickly side with Greenpeace. "There are also GMOs in Beijing!" one blogger wrote. "I wonder if markets there sell them too? It's so frightening! Municipal governments should clarify this!"

"We don't even know if GMOs are detrimental to health," said another. "All I want now is the right to know."

Regarding rice and other crops, China has additional problems besides GMOs — pollution.

In a "state secret" report, the Chinese government admitted last month that one-fifth of the country's agricultural land was polluted, and that China's southern rice fields were particularly contaminated.

Scientists and researchers have found hazardous levels of cadmium, arsenic, nickel, lead and mercury in rice grown near the Yangtze and Pearl River Deltas, the report said, according to the Financial Times. Previous investigations by Chinese media have turned up severe cadmium pollution in rice that is grown in the southern province of Hunan, which caused national alarm.

For more information and breaking news on GMOs, visit GMOs.NaturalNews.com.

Republished with permission from NaturalNews
​Written by J.D. Heyes

EU’s GMO revolution: More than half of EU member states opt out of GM crop usage

DNA from GMOs can pass directly into humans, study confirms