Newly published research, investigating the relationship between increased food production and soil drying issues in northern China, suggest the increase in agricultural activities may be responsible for the strong decreasing trends of soil moisture. The research suggest alternative farming practices that can meet the increased food demand while sparingly utilizing water resources will prove critical to the sustainability of the food production system.

Researchers from Purdue University and China Agricultural University have joined forces in analyzing 30 years of temperature and rain data in combination to soil moisture during the growing season in Northern China. The team has come to a conclusion that the soil moisture has decreased by 6% since 1983.

According to newest research, drying out of this important agricultural region in northern China might be more due to increased farming than rising temperatures and lower amount of precipitation. The research was published July 09, 2015 in Nature's Scientific Reports. 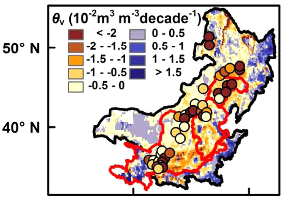 The soil in the region is now at less than 40% of it's water holding capacity, while the optimal moisture levels are typically estimated at 40 to 85%. The soil is getting drier and it this trend continues, it won't be able to support crop growth by 2090, said the research leader Qinlai Zhuang and his scientists: "The soil moisture declined by 1.5 to 2.5 percent every decade of the study and, while climate change is still a factor, this water depletion appears to be largely driven by human activities. A 10 percent decline in soil moisture over the course of a century would have major implications for agriculture and the fresh water supply in this heavily populated area."

Northern China is a home to 40% of the total world population, and it accounts for 65% of the nation's crop area.

"The drying of soil in Northern China has been well documented, but its causes and the impacts of agricultural intensification in general have been understudied," said Qinlai Zhuang. "This information is critical to improvement of agricultural practices and water resource management. The demand for food and water is increasing, but current practices to meet this demand threaten the future security of water resources. Unfortunately, with the growing world population, more and more regions could face the same circumstances of agricultural intensification for food security."

The research team analyzed direct observations at 40 monitoring stations set up within agricultural plots, and the data of fertilizer use and crop types since 1983. This data was compared against the satellite remote sensing of water content on the soil's surface and terrestrial water storage, meteorological observations and measurements of river discharge.

The study lasted from 1983 to 2009 at two sites, one agricultural and another at an unspoiled grassland. A significant drying trend was discovered in the soil moisture of the agricultural site while a slight increase in moisture was recorded in the grassland. A consistent trend in decreasing of soil moisture correlated with increased usage of fertilizers and rapid increase in the number of crops with higher water demand, such as the corn.

"Fertilizer has been overused in China, which accounts for 31.4 percent of the total global consumption," Liu Yaling explained "Although the negative effects of using fertilizer in excess of the needs of the crop is recognized in the scientific community, it is difficult to reverse the farming practices."

In addition to increased fertilizer usage, increasing soil irrigation, caused by the heightened demand for water of newly developed crop species, also leads to increased drawal upon the surface and groundwater resources.

"The results of this study underscore the importance of developing strategies for sustainable agriculture," Liu said. "Perhaps crops that require less water could be substituted, water-saving technologies like mulching, reduced tillage, drip irrigation and improved soil-crop system management could be employed more broadly and advances in agricultural technology could improve the situation. The Chinese government is very interested in this issue, and this work was an important step in the road to sustainability."