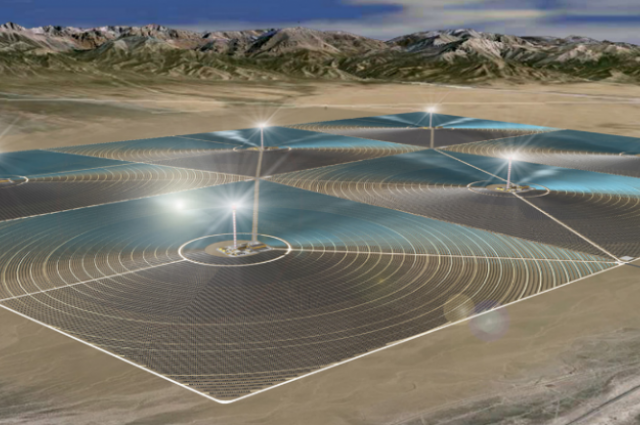 On Tuesday, August 4, 2015 China announced it's plan to reduce the usage of fossil fuels over the next 15 years, and further increase it's investments in solar power. This project is in agreement with UN's new pledge to cut carbon emissions around the globe.

China's goal is to boost the energetic productivity of non-fossil fuels to 20% by 2030, the National Geographic reports. This goal shows how quickly this billion population country is becoming the world's leader in solar power. By now, it is responsible for producing two thirds of world's solar collectors, and is side by side with Germany in it's cumulative photovoltaic capacity, according to the International Energy Agency (IEA).

Left image shows how much land in China's Gobi Desert was covered by solar panels on October 15, 2012. The right image shows the amount of land covered by them on May 22, 2015. The latest covered surface area is three times the area covered less than three years ago. Image credit: Jesse Allen, NASA Earth Observatory.

The country's first large-scale solar power station was constructed about 6 years ago in the Gansu Province of the Gobi Desert. According to the new photos, taken by NASA's satellites, the solar panels now cover around 3 times the land they did 3 years ago. China achieved a total capacity of 28.1 GW (gigawatts) in 2014, IEA reported, and has increased the capacity by additional 5 GW during the first quarter of 2015.

In 2014, China invested $83.3 billion into renewable energy resources, according to the UN Environment report, which is more than double of the latest investment in the resources made by the US.

Generally speaking, the solar energy is getting more and more cost-effective, as the solar collectors become cheaper and batteries are designed to store the collected energy for cloudy days and nighttime. Bloomberg New Energy Finance forecasts the solar power will see the global record boom and account for one third of new electricity generation by 2040, led partly by China.