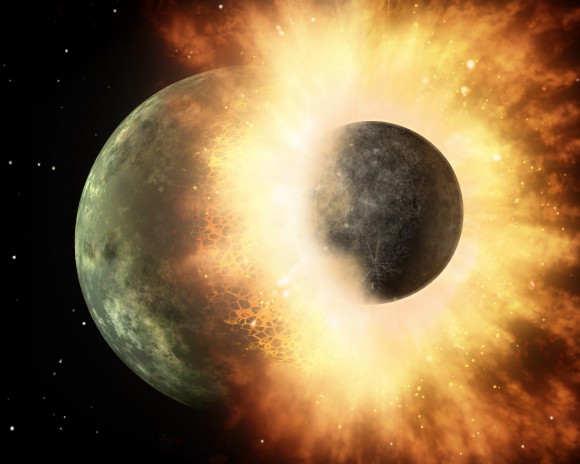 According to the prevailing hypothesis, a Mars-sized body known as Theia smashed into Earth billions of years ago. Earth survived this giant impact but the fragments from the crash gradually coalesced into the Moon that we see today.

When scientists first looked at the samples from the Apollo 11, 12 and 16 missions their microscopes did not reveal traces of this impact but when Herwartz et al. recently analyzed fresh basalt samples from three Apollo landing sites and compared them with several samples of Earth's mantle they found that the oxygen isotope values measured in these lunar rocks differ significantly from the terrestrial material, supporting the giant-impact hypothesis.

“If the Moon formed predominantly from the fragments of Theia, as predicted by most numerical models, the Earth and Moon should differ,” the study published in journal Science on June 6, 2014, states.

"The differences are small and difficult to detect, but they are there," lead author Herwartz told Reuters. "We also had soil samples from NASA, but this material is not ideal for determining the bulk oxygen isotopic composition of the moon, as lunar soil may be contaminated by micrometeorites and the like."

Robin Canup, a planetary scientist with the Southwest Research Institute in Boulder, Colorado, said this work is the first to claim to see such a difference in the isotopes of oxygen.

"The reported difference between the Earth and moon is extremely small, small enough that I think there will be debate as to whether the difference is real or an artifact of how one interprets the data," she added.

"Most numerical models of this collision imply a higher portion of Theia in the Moon than in Earth. Because of the isotope heterogeneity among solar system bodies, the isotopic composition of Earth and the Moon should thus be distinct. So far, however, all attempts to identify the isotopic component of Theia in lunar rocks have failed.

Our triple oxygen isotope data reveal a 12 ± 3 parts per million difference in Δ17O between Earth and the Moon, which supports the giant impact hypothesis of Moon formation. We also show that enstatite chondrites and Earth have different Δ17O values, and we speculate on an enstatite chondrite–like composition of Theia. The observed small compositional difference could alternatively be explained by a carbonaceous chondrite–dominated late veneer."