Scientists believe that around 4.5 billion years ago, a protoplanet called Theia collided with the Earth, sending debris into space that eventually formed the Moon. According to new research, the crash also likely left enormous chunks– even millions of times larger than Mount Everest– buried beneath our planet.

Two massive pieces of rock are buried deep under the Earth's crust– one under the Pacific Ocean and the other under Africa.

Some experts suggested that these enormous chunks are fragments of tectonic plates that got stuck under their counterparts. However, new research suggests that their origin might be an alien planet.

A group of scientists from Arizona State University (ASU) theorized that the blobs are remnants of ancient protoplanet Theia, which crashed into the Earth 4.5 billion years ago.

The impact is believed to have turned the Earth's surface into a sea of magma, causing it to spew debris that ultimately created the Moon.

Lead researcher Qian Yuan, who studies geodynamics at ASU, thinks that after the collision, parts of Theia may have sunk deep in our planet's mantle, and the chunks are "millions of times larger than Mount Everest in terms of volume," he told Insider.

Yuan noted that these blobs are between 1.5 and 3.5 percent more dense and hotter than the rest of the Earth's mantle.

If Theia was highly dense and rich in iron, then any pieces of it that broke off when it crashed into the Earth would have sunk deep into the mantle, where they could have been preserved.

Yuan added that denser chunks of the Earth's crust possibly sank into the mantle and combined with them, making the blobs grow over time.

Scientists have also figured out that plumes of hot magma and rock from some Icelandic and Samoan volcanoes came from these chunks. By studying the magma's makeup, researchers can get insight into the composition of these buried blobs.

A previous study shows that some elements in the volcanic plumes date back to roughly 4.5 billion years ago when Theia and Earth supposedly collided.

The findings will be published in the journal Geophysical Research Letters, providing proof that Theia was present in our solar system billions of years ago. 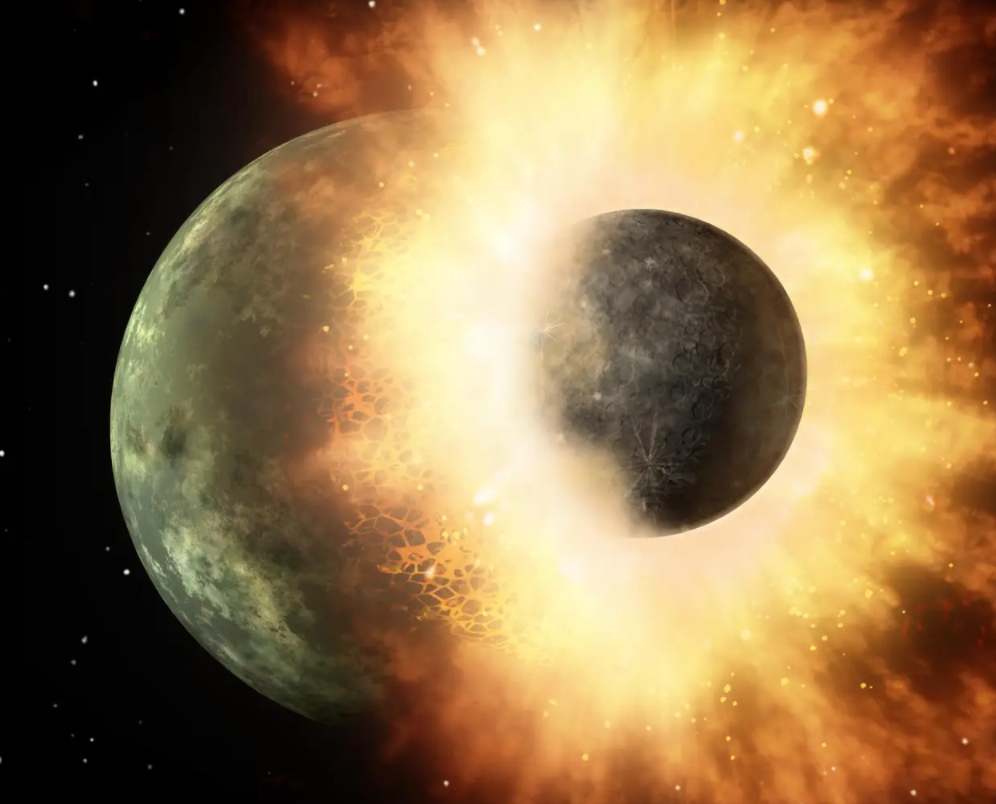 ​Image: An artist's depiction of an impact of a protoplanet like Theia and Earth. Credit: NASA/JPL-Caltech

The Moon is widely recognized as formed from the “Giant Impact”: when at least a Marssized planetary embryo Theia collided with the protoEarth during the last stage of terrestrial planet formation [1]–[4]. Such a model is well aligned with some key physical aspects of Earth-Moon system, including anomalous high angular momentum of Earth-Moon system, small iron core of the Moon and its high mass ratio compared to the Earth [2], [4]. However, one of the most critical issues related to this scenario is that no evidence has been found for the existence of the hypothesized planetary embryo Theia. This is in part because of its widely debated size ranging from 0.1~0.45 Earth mass (M⊕) [5] and enstatite to carbonaceous chondrite composition [6]– [9]. Moreover, whereas it is mostly agreed that the core of Theia promptly merged with the proto-Earth core shortly after the impact [3], what fraction of and how the Theia mantle was preserved into the Earth mantle remain elusive. This post-impact process is not only responsible for the initial thermal and compositional structures of the Earth, but also significantly affects Earth’s long-term chemical evolution.