The images making up the mosaic were taken by the two LRO Narrow Angle Cameras, which are part of the instrument suite known as the Lunar Reconnaissance Orbiter Camera (LROC). The cameras can record a tremendous dynamic range of lit and shadowed areas.

Web viewers can zoom in and out, and pan around an area. Constructed from 10 581 pictures, the mosaic provides enough detail to see textures and subtle shading of the lunar terrain. Consistent lighting throughout the images makes it easy to compare different regions. 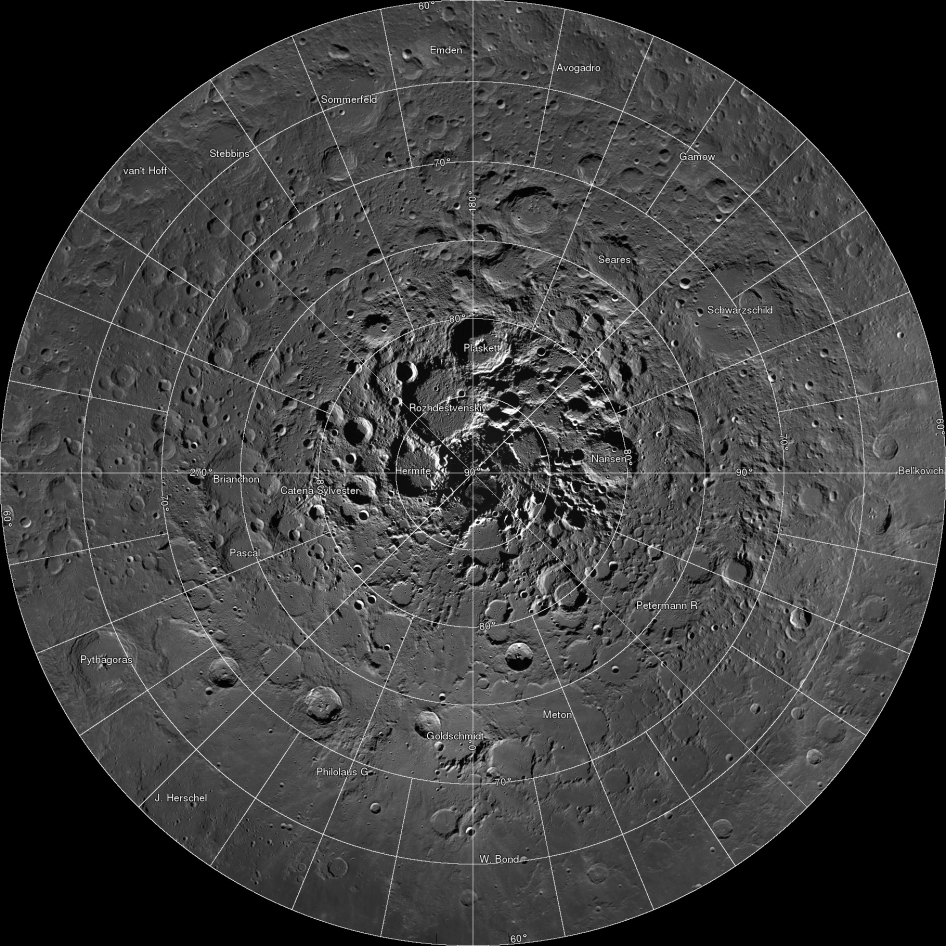 The increased altitude over the northern hemisphere enables the two Narrow Angle Cameras (NACs) and Wide Angle Camera (WAC) to capture more terrain in each image acquired in the northern hemisphere. As a result, the Lunar Reconnaissance Orbiter Camera (LROC) archive now contains complete coverage from 60°N to the north pole (except of course for areas of permanent shadow) with a pixel scale of 2 meters.

The LROC team assembled 10 581 NAC images, collected over 4 years, into a spectacular northern polar mosaic. The LROC Northern Polar Mosaic (LNPM) is likely one of the world’s largest image mosaics in existence, or at least publicly available on the web, with over 680 gigapixels of valid image data covering a region of the Moon (2.54 million km², 0.98 million miles²) slightly larger than the combined area of Alaska (1.72 million km²) and Texas (0.70 million km²) — at a resolution of 2 meters per pixel! To create the mosaic, each LROC NAC image was map projected on a 30 m/pixel Lunar Orbiter Laser Altimeter (LOLA) derived Digital Terrain Model (DTM) using a software package called Integrated Software for Imagers and Spectrometers (ISIS). A polar stereographic projection was used in order to limit mapping distortions when creating the 2-D map. In addition, the LROC team used improved ephemeris provide by the LOLA and GRAIL teams and an improved camera pointing model to enable accurate projection of each image in the mosaic to within 20 meters.