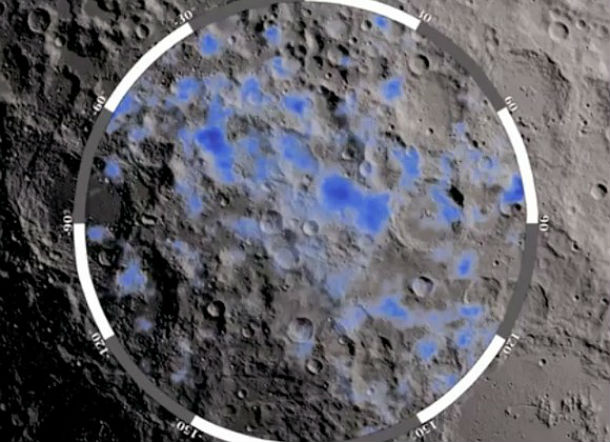 Since the 1960's, scientists have taught that maybe frozen water might exist preserved in cold, dark craters at the Moon's poles. Althought earlier lunar missions have detected hints of water on the Moon, new data from the Lunar Reconnaissance Orbiter (LRO) exactly located areas close to the south pole where water might have possibly survived.The main ingredient in water hydrogen was crucial to this discovery as LRO uses its Lunar Exploration Neutron Detector, or LEND, to estimate how much hydrogen is trapped in the lunar soil.Experts, by combining years of data acquired by LEND, observe mounting evidence of hydrogen-rich locations close to the Moon's south pole, strongly indicating the existence of frozen water.

The main ingredients for water hydrogen and oxygen might be embedded in the lunar soil.To detect water on the Moon, researchers are trying to find hints of hydrogen using the Lunar Reconnaissance Orbiter's LEND neutron detector. By looking at the interaction of neutrons with the lunar soil, experts are able to interpret just what amount of hydrogen is likely to be present. However, to make a detailed interpretation possible, LEND must observe a large number of neutrons. Lunar Reconnaissance Orbiter is constantly moving, so LEND is never above one area for long enough period to count many neutrons. To make a precise interpretation of neutron flux, researchers combine together many measurements from many orbits.With every passing LEND's dataset gets bigger and its image of neutron flux gets better continually over time.

The dark blue areas presented in the video below are locations on the south pole of the Moon with a suppressed flux of neutrons as a result of their interaction of hydrogen.These regions imply the existence of frozen water within the soil.

Featured image: The blue areas show locations on the Moon’s south pole where water ice is likely to exist (Credit:NASA/GSFC)