New data obtained by NASA's Lunar Reconnaissance Orbiter (LRO) spacecraft show Earth's gravity has made a visible impact on the orientation of faults in the Moon's surface, NASA announced on September 15, 2015.

LRO was launched on June 18, 2009 and has so far made a significant contribution to our knowledge of the Moon.

14 new cliffs, known as "lobate scarps", on the lunar surface have been added to the 70 previously known ones, in August 2010, as the researchers viewed the images obtained by the LRO's Narrow Angle Camera (NAC). Based on their random distribution, the scientists concluded the Moon is shrinking. 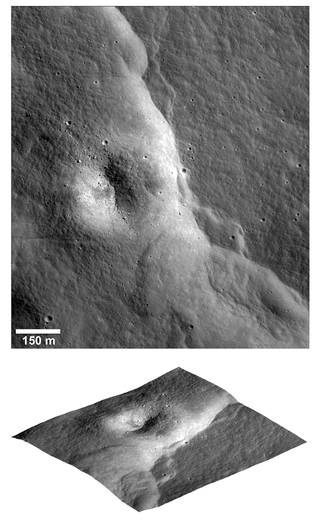 A nadir (top) and perspective view (bottom) of a prominent lobate fault scarp in the Vitello Cluster. Image credit; NASA/LRO

The orientation of thousands of faults etched into the lunar surface and formed during the shrinking of the Moon are being influenced by the gravity pull from our planet, new LRO data indicates.

The faults are less than 10 km (6.2 miles) long and only about tens of meters (33 feet) high. The scientist believe they are formed due to contractions resulting from the cooling of Moon's still hot interior. In the cooling process portions of the liquid outer core solidify and the lunar volume decreases. 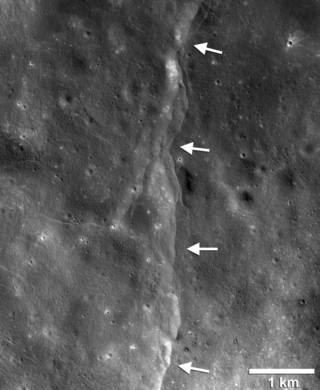 The Lunar Reconnaissance Orbiter Camera (LROC) has so far spent over 6 years in the orbit and imaged about three-fourths of the lunar surface. Over 3 000 of relief features have been discovered so far. The fault orientation analysis yielded surprising results showing their creation was the result of the Moon's shrinking caused by the pull of gravitational tidal forces of the planet Earth. 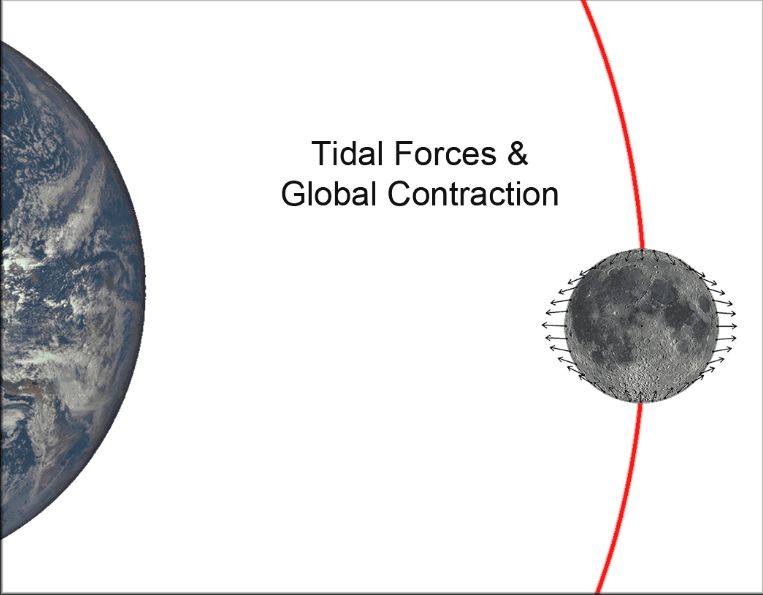 ​​The gravitational forces of the Moon and the Sun are responsible for Earth's rising and falling tides. Earth's gravity exerts forces on the Moon and the Moon is slowly receding away from Earth. Image credit: NASA/LRO (See animation)

Global contraction of the Moon alone should generate an array of thrust faults, with no preference in the faults orientation, as the contracting forces are equally distributed in all directions. "This is not what we found," said Smithsonian senior scientist Thomas Watters of the National Air and Space Museum in Washington. "There is a pattern in the orientations of the thousands of faults and it suggest something lese is influencing their formation, something that's also acting on a global scale — 'massaging' and realigning them".

The discovery will be published in the October issue of the Geology journal. 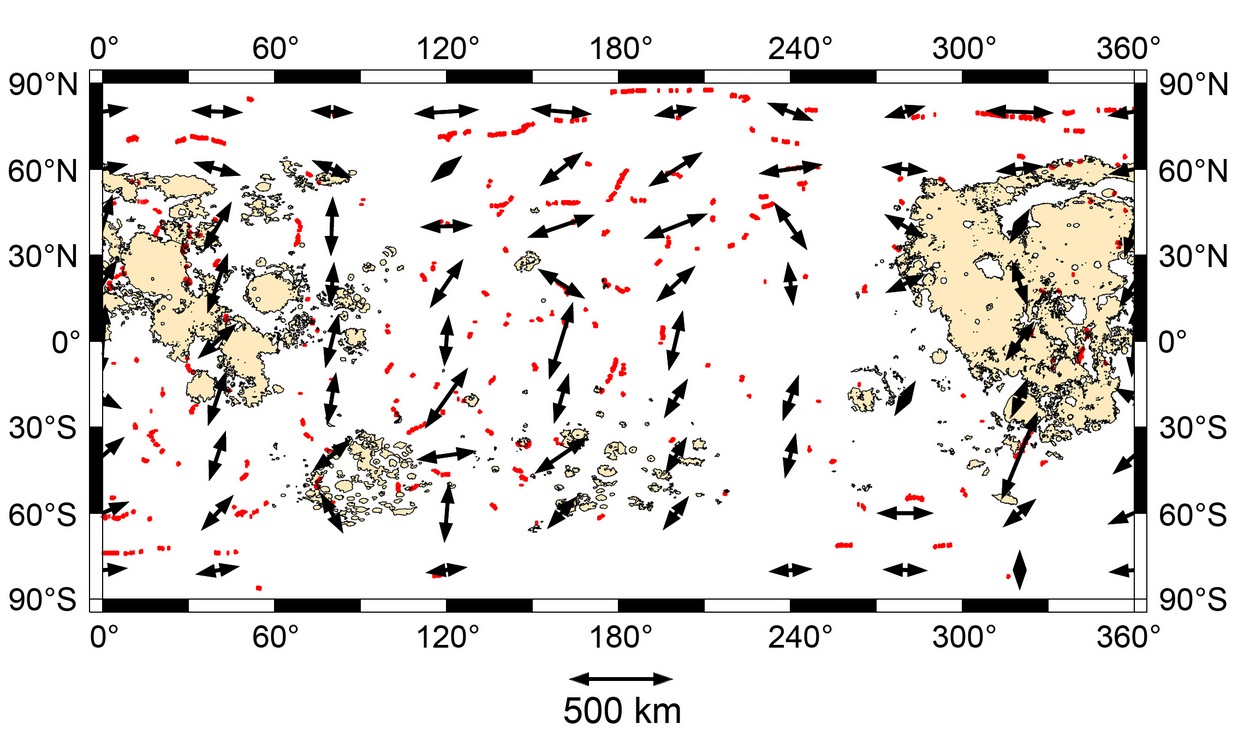 The map shows the locations of over 3,200 lobate thrust fault scarps (red lines) on the Moon. The black double arrows show the average orientations of the lobate scarps sampled in areas with dimensions of 40° longitude by 20° latitude and scaled by the total length of the fault scarps in the sampled areas. The pattern of the black double arrows (orientation vectors) indicates that the fault scarps do not have random orientations as would be expected if the forces that formed them were from global contraction alone. Mare basalt units are shown in tan. Image credit: NASA/LRO/Arizona State University/Smithsonian Institution

"The discovery of so many previously undetected tectonic features as our LROC high-resolution image coverage continues to grow is truly remarkable. Early on in the mission we suspected that tidal forces played a role in the formation of tectonic features, but we did not have enough coverage to make any conclusive statements. Now that we have NAC images with appropriate lighting for more than half of the Moon, structural patterns are starting to come into focus," said Mark Robinson of Arizona State University, coauthor and LROC principal investigator.

The fault scarps of the Moon's surface are so young, that most likely they are still actively forming today. The research team conducted modeling showing the maximum stress is reached at the point when the Moon is farthest from Earth in its orbit (at apogee). If the faults are still active, the occurrence of shallow moonquakes related to slip events on the faults should be most frequent when the Moon is at apogee. A long-lived lunar seismic network can be used to test this hypothesis. 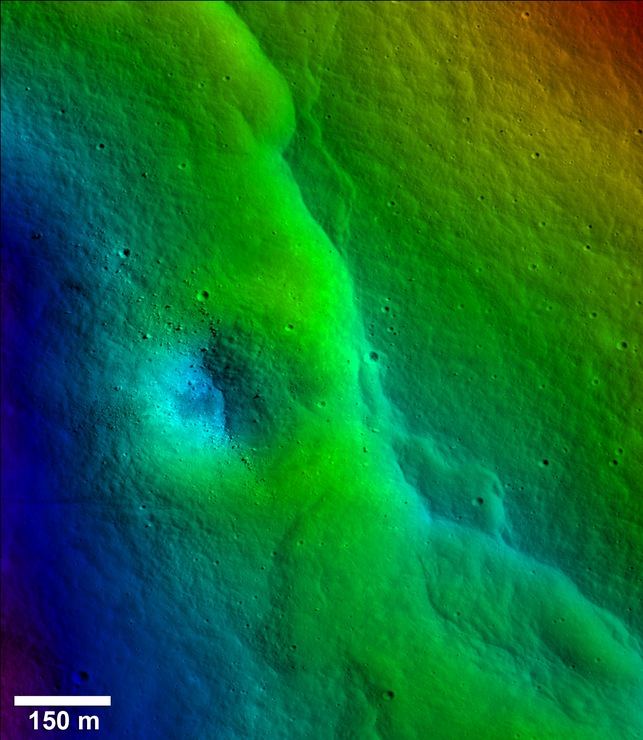 A prominent lobate fault scarp in the Vitello Cluster is one of thousands discovered in Lunar Reconnaissance Orbiter Camera images (LROC). Topography derived from the LROC Narrow Angle Camera (NAC) stereo images shows a degraded crater has been uplift as the fault scarp has formed (blues are lower elevations and reds are higher elevations). Boulders in the crater have aligned in rows that parallel the orientation of the fault scarp. Image credit: NASA/LRO/Arizona State University/Smithsonian Institution

"With LRO we've been able to study the Moon globally in detail not yet possible with any other body in the Solar System beyond Earth, and the LRO data set enables us to tease out subtle but important processes that would otherwise remain hidden," added John Keller, LRO Project Scientist at NASA's Goddard Space Flight Center, Greenbelt, Maryland.