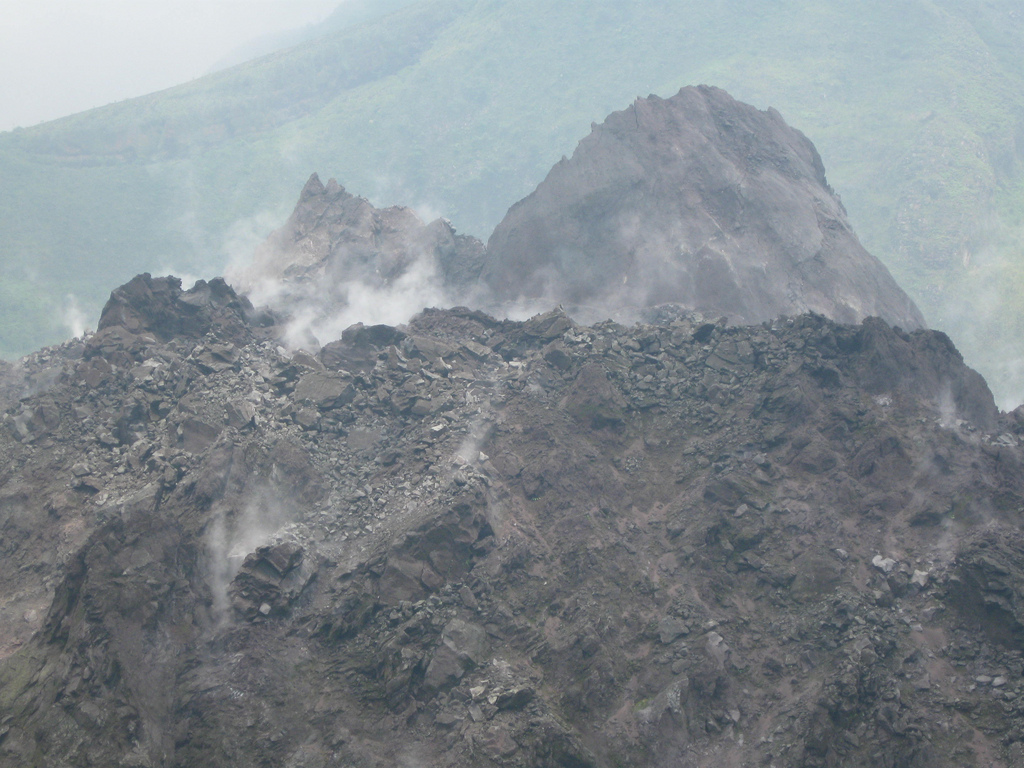 Kelut volcano in Indonesia violently erupted today shooting a column of smoke and ash approximately 15 km into the air. According to Darwin VAAC, at 16:32 UTC, volcanic ash extended 50 NM (93 km) to the west. Authorities increased alert level to highest. Aviation color code is on red.

According to Mr. Surono, the former head of the Volcanology and Disaster Mitigation Center (PVMBG), the eruption sent gravel raining down as far as 50 kilometers from the crater of the volcano. Local news suggest heavy ash fall (up to gravel sized) in distances of 15 – 40 km.

PVMBG reported that during February 3 – 10 seismic activity at Kelut was dominated by both shallow and deep volcanic earthquakes; earthquake hypocenters were 3 km below the summit. Crater lake water temperatures increased since September 2013, particularly during January 23 – February 9.

Sutopo Purwo Nugroho, a spokesman for the National Disaster Mitigation Agency (BNPB), said that “thousands” of people had left the area and evacuation efforts were still ongoing.

A 10-kilometer exclusion radius around the crater has been ordered today. 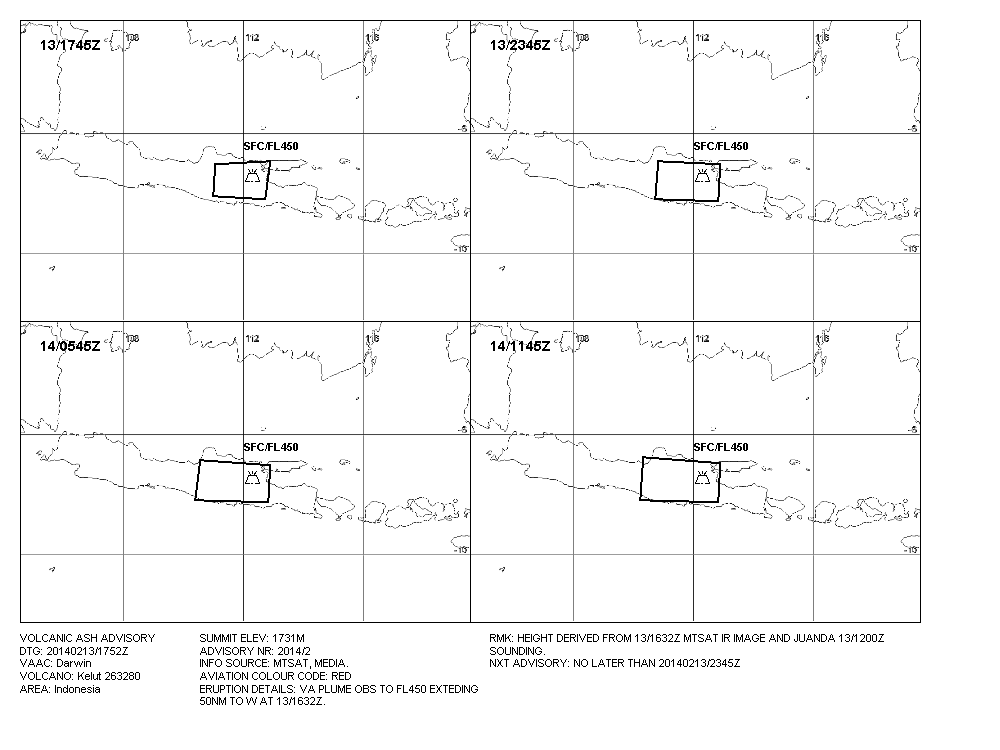 Eruptive activity continued at least until the morning.  According to latest advisory from Darwin VAAC, issued 09:44 UTC on February 14, high level volcanic ash plume (15.2 km / 55 000 feet) has moved  WSW away from volcano. 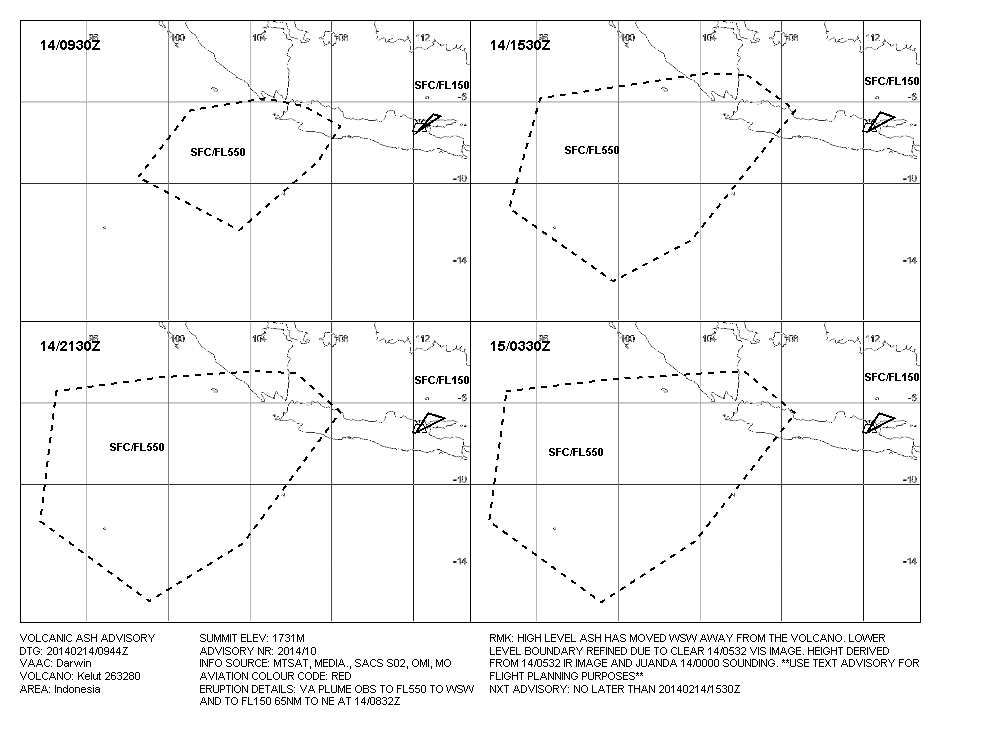 Local newspapers reported heavy ash falls in areas up to 200 km distance and that the explosion sound was heard in Yogyakarta (170 km distance). The ash plume forced the closure of several important regional airports, including Yogyakarta, Solo, and Surabaya. (VD)

“Based on verified data, over 76 000 people have been evacuated from five cities around the volcano … and about 200 000 people were affected,” National Disaster Mitigation Agency spokesman Sutopo Nugroho said in a text message.

Officials said two people died when their homes caved in under the weight of gravel and ash. (BBC) 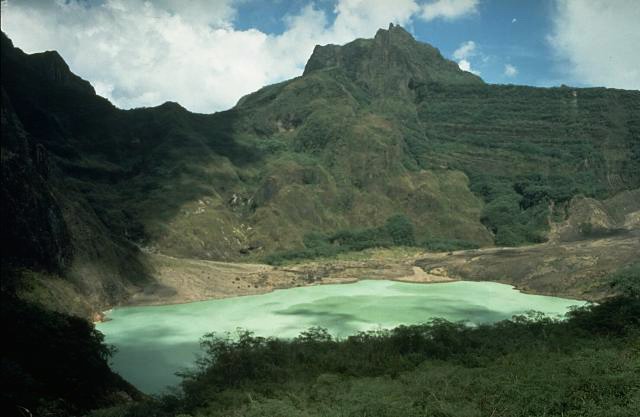 The relatively inconspicuous, 1731-m-high Kelut stratovolcano contains a summit crater lake that has been the source of some of Indonesia's most deadly eruptions. A cluster of summit lava domes cut by numerous craters has given the summit a very irregular profile.

Satellitic cones and lava domes are also located low on the eastern, western, and SSW flanks. Eruptive activity has in general migrated in a clockwise direction around the summit vent complex.

More than 30 eruptions have been recorded from Gunung Kelut since 1000 AD. The ejection of water from the crater lake during Kelut's typically short, but violent eruptions has created pyroclastic flows and lahars that have caused widespread fatalities and destruction.

After more than 5000 persons were killed during an eruption in 1919, an ambitious engineering project sought to drain the crater lake. This initial effort lowered the lake by more than 50 m, but the 1951 eruption deepened the crater by 70 m, leaving 50 million cubic meters of water after repair of the damaged drainage tunnels. After more than 200 deaths in the 1966 eruption, a new deeper tunnel was constructed, and the lake's volume before the 1990 eruption was only about 1 million cubic meters. (GVP)