Our solar system seems like a neat and orderly place, with small, rocky worlds near the Sun and big, gaseous worlds farther out, all eight planets following orbital paths unchanged since they formed.

However, the true history of the solar system is more riotous. Giant planets migrated in and out, tossing interplanetary flotsam and jetsam far and wide. New clues to this tumultuous past come from the asteroid belt.

"We found that the giant planets shook up the asteroids like flakes in a snow globe," says lead author Francesca DeMeo, a Hubble postdoctoral fellow at the Harvard-Smithsonian Center for Astrophysics.

Millions of asteroids circle the Sun between the orbits of Mars and Jupiter, in a region known as the main asteroid belt. Traditionally, they were viewed as the pieces of a failed planet that was prevented from forming by the influence of Jupiter's powerful gravity. Their compositions seemed to vary methodically from drier to wetter, due to the drop in temperature as you move away from the Sun.

That traditional view changed as astronomers recognized that the current residents of the main asteroid belt weren't all there from the start. In the early history of our solar system the giant planets ran amok, migrating inward and outward substantially. Jupiter may have moved as close to the Sun as Mars is now. In the process, it swept the asteroid belt nearly clean, leaving only a tenth of one percent of its original population.

As the planets migrated, they stirred the contents of the solar system. Objects from as close to the Sun as Mercury, and as far out as Neptune, all collected in the main asteroid belt. 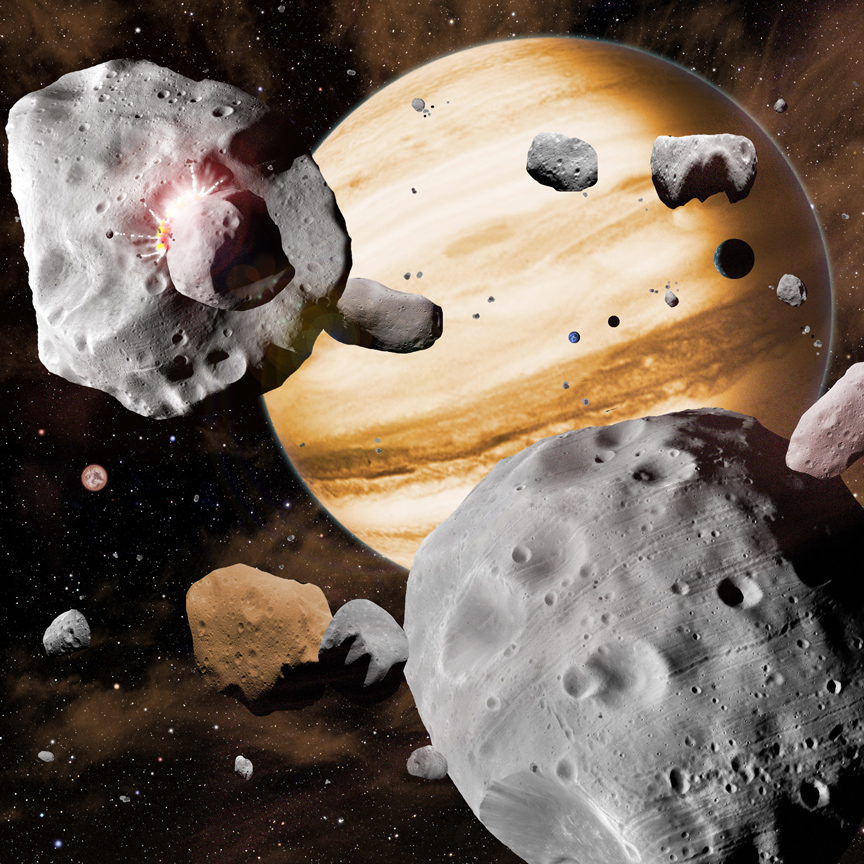 In this artist's conception, Jupiter's migration through the solar system has swept asteroids out of stable orbits, sending them careening into one another. As the gas giant planets migrated, they stirred the contents of the solar system. Objects from as close to the Sun as Mercury, and as far out as Neptune, all collected in the main asteroid belt, leading to the diverse composition we see today. Image credit: David A. Aguilar (CfA)

"The asteroid belt is a melting pot of objects arriving from diverse locations and backgrounds," explains DeMeo.

Using data from the Sloan Digital Sky Survey, DeMeo and co-author Benoit Carry (Paris Observatory) examined the compositions of thousands of asteroids within the main belt. They found that the asteroid belt is more diverse than previously realized, especially when you look at the smaller asteroids.

This finding has interesting implications for the history of Earth. Astronomers have theorized that long-ago asteroid impacts delivered much of the water now filling Earth's oceans. If true, the stirring provided by migrating planets may have been essential to bringing those asteroids.

This raises the question of whether an Earth-like exoplanet would also require a rain of asteroids to bring water and make it habitable. If so, then Earth-like worlds might be rarer than we thought.

The paper describing these findings appears in the January 30, 2014 issue of Nature.

Headquartered in Cambridge, Mass., the Harvard-Smithsonian Center for Astrophysics (CfA) is a joint collaboration between the Smithsonian Astrophysical Observatory and the Harvard College Observatory. CfA scientists, organized into six research divisions, study the origin, evolution and ultimate fate of the universe.

Featured image: Astronomers have theorized that long-ago asteroid impacts delivered much of the water now filling Earth's oceans, as shown in this artist's conception. If true, the stirring provided by migrating planets may have been essential to bringing those asteroids. Courtesy of CfA.