New active region, AR1865, located on the southeastern limb of the Sun erupted on October 9, 2013 peaking at 01:48 UTC as moderate M2.8 solar flare. Strong Coronal Mass Ejection (CME) was generated but it was not Earth directed. This region will become geoeffective in the coming days.

A Type II and IV radio emissions were associated with the event. Type IV emissions occur in association with major eruptions on the Sun and are typically associated with strong CMEs and solar radiation storms.

This is the strongest solar flare in nearly 2 months. An impulsive M3.3 solar flare erupted on August 17, 2013. 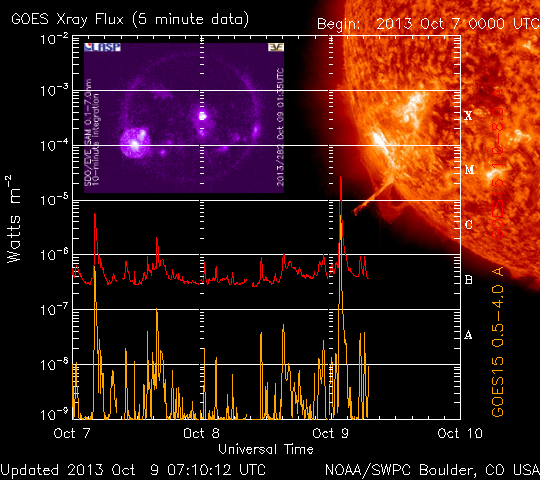 There are currently 8 numbered active regions on the disk. All of them have either Alpha or Beta magnetic configuration. 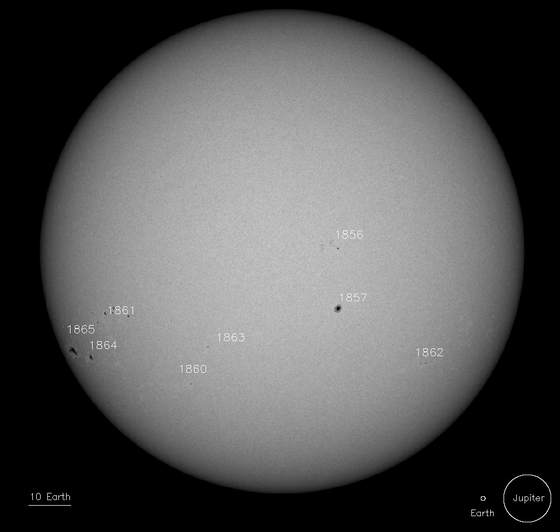 The geomagnetic field has been at quiet to minor storm levels for the past 24 hours. Solar wind speed, as measured by the ACE spacecraft, reached a peak speed of 480 km/s at 19:43 UTC on October 8th. Total IMF reached 26 nT at 20:52 UTC. The maximum southward component of Bz reached -15 nT at 20:46 UTC. Electrons greater than 2 MeV at geosynchronous orbit reached a peak level of 806 pfu.

NOAA forecasters suspect that a second CME might arrive on today. They estimate a 65% chance of polar geomagnetic storms during the next 24 hours. High latitude sky watchers should remain alert for auroras.