Kamchatkan Kliuchevskoi (Klyuchevckoy) volcano continued its erupting phase and sent out column of ash to a height of up to 5.3 km on Thursday, October 10, 2013, according to official observatory – KVERT. Volcanic color code is set to orange.

The cloud of ash moved in the southeastern direction from the volcano, and it posed no danger to residential areas, officials said in a statement.

The statement warned all tourism companies operating in the region against holding tours in the areas located near the volcano, which can also pose threat to aircraft.

Kliuchevskoi is Kamchatka's highest and most active volcano. Since its origin about 6000 years ago, the beautifully symmetrical, 4835-m-high basaltic stratovolcano has produced frequent moderate-volume explosive and effusive eruptions without major periods of inactivity. Kliuchevskoi rises above a saddle NE of sharp-peaked Kamen volcano and lies SE of the broad Ushkovsky massif. 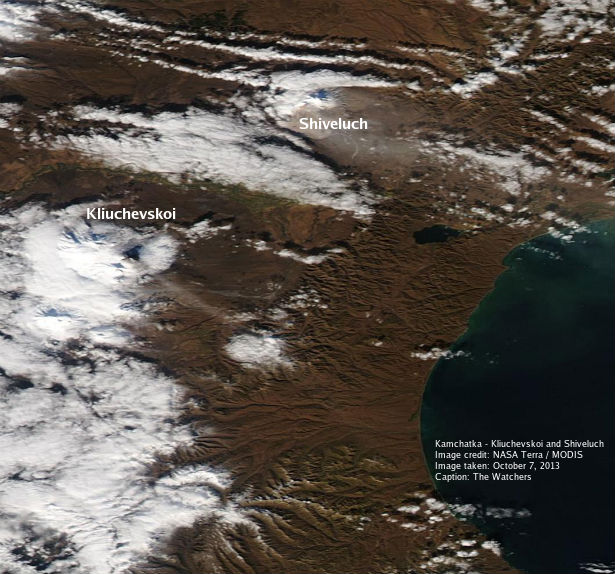 More than 100 flank eruptions have occurred at Kliuchevskoi during the past roughly 3000 years, with most lateral craters and cones occurring along radial fissures between the unconfined NE-to-SE flanks of the conical volcano between 500 m and 3600 m elevation. The morphology of its 700-m-wide summit crater has been frequently modified by historical eruptions, which have been recorded since the late-17th century.

Historical eruptions have originated primarily from the summit crater, but have also included numerous major explosive and effusive eruptions from flank craters (GVP).

In their latest report issued today KVERT stated the eruption is ongoing. There are more than 150 volcanoes on Kamchatka and up to 30 of them are active.