SOHO's LASCO C3 coronagraph treated us with another movie of comet's death plunge into the Sun. Like other comets that were recorded during August, today's sungrazer belongs to Kreutz Sungrazer family. Those comets are characterized by orbits taking them extremely close to the Sun at perihelion.

They are believed to be fragments of one large comet that broke up several centuries ago and are named for German astronomer Heinrich Kreutz, who first demonstrated that they were related.

Interesting to note is that Comet ISON, scheduled for November 28, 2013, is also a sungrazer, although a much bigger one. 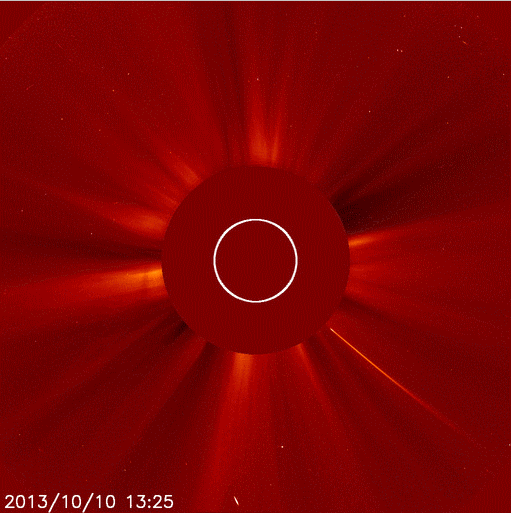 Large Angle and Spectrometric Coronagraph – “LASCO” – “coronagraph” telescopes on-board the SOHO satellite. A coronagraph is a special type of telescope that uses a solid disk (“occulter” or “occulting disk”) to actually cover up the Sun itself, completely blocking direct sunlight, and allowing us to see the atmosphere around the outside of the Sun (known as the “corona”).