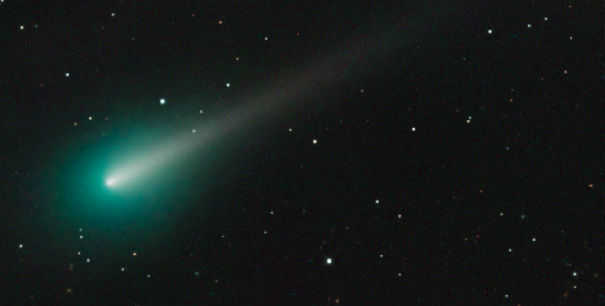 New studies released at the American Astronomical Society’s 45th Annual Division for Planetary Sciences meeting in Denver, Colorado suggests that Comet ISON could make it through its close perihelion passage near the Sun. Researchers Matthew Knight of the Lowell Observatory and Jian-Yang Li of the Planetary Science Institute presented their reasoning on Comet ISON observations on October 9, 2013.

The first criterion for ISON to survive perihelion is its nucleus size. Comet nuclei smaller than 200 meters in diameter, with an average density or lower typically do not survive a close passage to the Sun. Observations from the Hubble Space Telescope, as well as smaller telescopes, suggest that ISON is between 1 and 4 kilometers across. Researchers Kevin Walsh and Mathew Knight place the size of ISON’s nucleus in the range of 0.5 to 2 kilometers.

Given current constraints on ISON's nucleus properties and the typically determined values for these properties among all comets, Walsh and Knight find tidal disruption to be unlikely unless other factors affect ISON substantially. Knight noted that ISON may be just big and dense enough not to be vaporized and to survive its close encounter with the Sun. So it looks like ISON appears likely to survive the combination of mass loss due to sublimation and tidal disruption for most plausible scenarios. 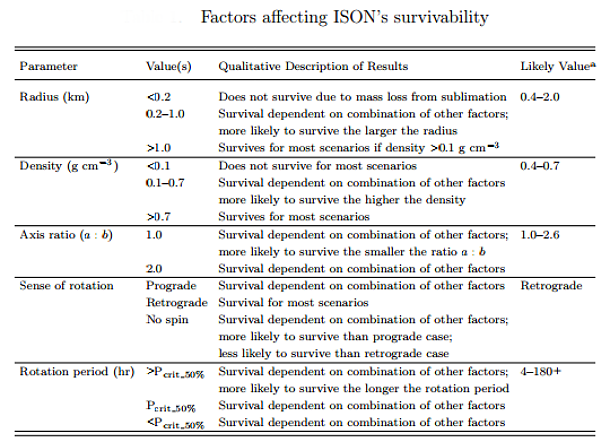 Research scientist Jian-Yang Li of the Planetary Science Institute was able to infer the position and existence of a jet coming from the nucleus of the comet, which most likely marks the position of one of its rotational poles. Li noted that the previously observed red color in the coma of ISON suggests an already active comet sublimating water ice grains as they move away from the nucleus. ISON's green color comes from the gases surrounding its icy nucleus. Jets spewing from the comet's core contain diatomic carbon and cyanogen. NASA's Swift mission observed a huge cloud of hydroxyl particles surrounding ISON. 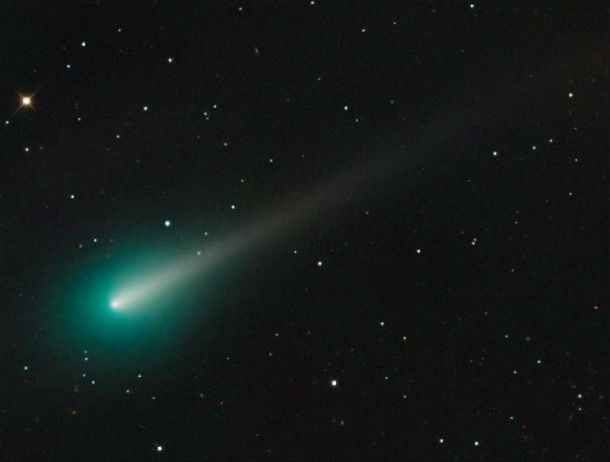 The rotational pole of the nucleus indicates that only one side of the comet is being heating by the Sun on its way in until approximately one week before it reaches its closest point to the Sun. Prograde spin of an elongated nucleus may be a bad news for ISON, because tidal forces will very likely rip it apart. But a retrograde rotator is very likely to survive the encounter.

ISON will pass inside the Roche limit of the Sun, which is a distance of 2.4 million kilometers with temperatures approaching 5,000 degrees Fahrenheit on closest approach. Comet ISON is expected to be the most active and put on its best showing post-perihelion – if it survives.