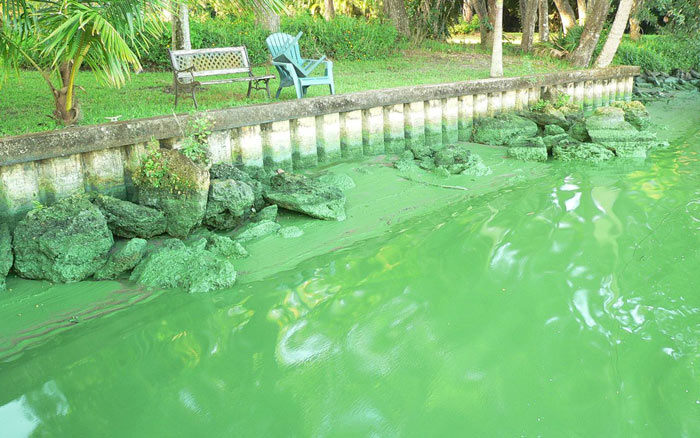 Massive outbreak of toxic algae is reported at Florida’s southeastern coast. St. Lucie River, its estuary, and the Indian River Lagoon are slimed with fluorescent green toxic algae that grow on excess sewage, manure, and fertilizer runoff released locally and from Lake Okeechobee. Health officials warned people not to touch the water or risk infection.

Exposure to algae toxins (when people drink the water, touch it, or inhale vapors from it) can cause rashes, skin and eye irritation, allergic reactions, gastrointestinal upset, liver damage, serious illness, and even death. 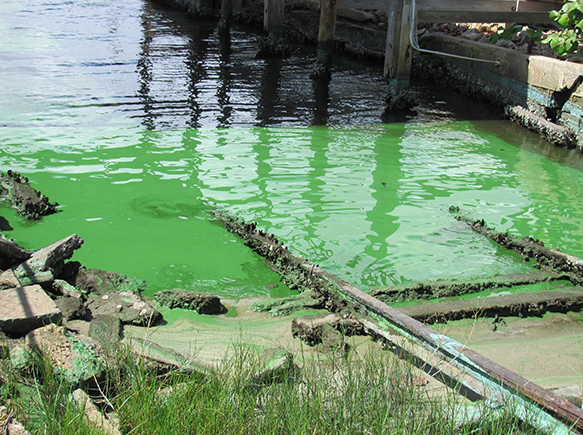 A massive toxic algae outbreak covers southeast Florida’s waters with fluorescent green slime during what should have been the prime-time of summer fishing, surfing, and swimming season. Health officials warned people not to touch the water because it poses a dangerous health risk.

The fluorescent green and black slime of toxic algae is the environment’s response to nutrient runoff made worse by this season’s heavy rainfall. The South Florida Water Management District says July’s soaking of South Florida that capped the wettest start to the wet season since 1968 has made the situation worse. District meteorologists reported the wettest April-July period on record in South Florida since 1932 (ENS).

The pollution is leaving local economy in ruin, and forcing the local fishermen and divers to do whatever they can to make a living. Nearly 100 percent of the 23 acres of state funded oyster beds are dead and 100 percent of the St. Lucie River in Stuart and Port St. Lucie is toxic. 70 percent of the tourism industry is seeing a great economic hit.

Executive Director at Florida Oceanographic Society, Mark Perry, called for declaration of State of Emergency explaining this is not only an emergency environmentally, but economically for the people in the area for their livelihoods and health-wise. 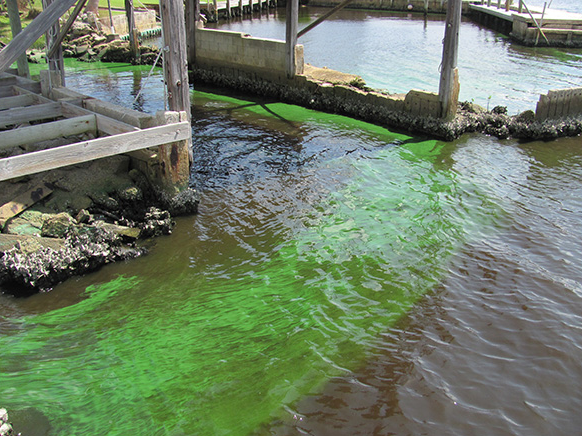 It’s also the same place where hundreds of manatees, birds, fish and dolphins have been washing up dead since the previous winter and spring.

Though the situation was growing for years the locals have had enough. Thousands were gathered throughout August in protests demanding the officials to act now. Another protest is scheduled for September 1st by Citizens for CLEAN WATER who called all Florida residents to join and help declare a state of emergency.

A confirmed case of Naegleria fowleri has been reported in Glades County, west of Lake Okeechobee. Naegleria fowleri, commonly referred to as the "brain-eating amoeba", is a microscopic amoeba which can cause a rare and devastating infection of the brain called primary amebic meningoencephalitis (PAM). Infections can happen when contaminated water enters the body through the nose. Read more here.

Red tide is a common name for a phenomenon known as an algal bloom (large concentrations of aquatic microorganisms) when it is caused by a few species of dinoflagellates and the bloom takes on a red or brown color. Red tides are events in which estuarine, marine, or fresh water algae accumulate rapidly in the water column, resulting in coloration of the surface water.

When the algae are present in high concentrations, the water appears to be discolored or murky, varying in color from purple to almost pink, normally being red or green. Not all algal blooms are dense enough to cause water discoloration, and not all discolored waters associated with algal blooms are red. Additionally, red tides are not typically associated with tidal movement of water, hence the preference among scientists to use the term algal bloom.

Some red tides are associated with the production of natural toxins, depletion of dissolved oxygen or other harmful effects, and are generally described as harmful algal blooms. The most conspicuous effects of these kinds of red tides are the associated wildlife mortalities of marine and coastal species of fish, birds, marine mammals, and other organisms.

Red tides in the Gulf of Mexico are a result of high concentrations of Karenia brevis, a microscopic marine algae that occurs naturally but normally in lower concentrations. In high concentrations, its toxin paralyzes the central nervous system of fish so they cannot breathe. Dead fish wash up on Mexican gulf beaches (Wiki).

Featured image: Microcystis bloom in Caloosahatchee River at Olga, Florida approximately a mile and a half west of the Franklin Lock, south side of the river, October 14, 2005. Exposure to these blue-green algae toxins—when people drink the water, touch it, or inhale vapors from it—can cause rashes, skin and eye irritation, allergic reactions, gastrointestinal upset, serious illness, and even death. Photo: Richard Solveson / EarthJustice