The great M 9.1 earthquake of December 26, 2004, which produced a devastating tsunami killing 227,898 people was located near the today's M 6.1. The tsunami generated by that earthquake was given various names, including the 2004 Indian Ocean tsunami, South Asian tsunami, Indonesian tsunami, and the Boxing Day tsunami.

There are 1 730 000 people living within 100 km radius. Hours after the quake the roads are still blocked, many buildings were destroyed and numerous strong aftershocks are being reported as well as many landslides. This was very serious, dangerous and deadly earthquake.

It happened along the extremely dangerous Great Sumatra Fault. The Indonesian island of Sumatra is located in a highly seismic area of the world. In addition to the subduction zone and the associated Sunda Arc off the west coast of the island, Sumatra also has a large strike-slip fault, the so-called Great Sumatran Fault, running the entire length of the island. This fault zone accommodates most of the strike-slip motion associated with the oblique convergence between the Indo-Australian and Eurasian plates. The fault ends in the north just below the city of Banda Aceh, which was devastated in the 2004 Indian Ocean earthquake. After the December 2004 earthquake, pressure on the Great Sumatran Fault has increased tremendously, especially in the north.

Minutes after the mainshock EMSC has recorded one aftershock with magnitude 4.3 and depth of 10 km (computer generated depth), however, people of Sumatra are talking about many aftershocks and landslides.

A strong to very strong shaking in a radius of 30 km around the epicenter is expected by the local seismological agencies.

First reports in the local press are talking about many damaged houses. By 8:35 UTC several people have been reported injured. At 8:47 UTC at least 2 fatalities are being reported at Lampehan.

Local Vivanews reports: Dozens of people reportedly also become victims of collapsed buildings and landslides. The worst damage occurred in the village Lampahan, District Timang Elephants, Bener Meriah. Five houses have been buried by a landslide. The number of injured is expected to grow.

The second floor of an hospital near the epicenter has collapsed. A mosque has collapsed due to the strong aftershock, reports are mentioning tens of people still under the rubble.

More updates on this earthquake at ER. 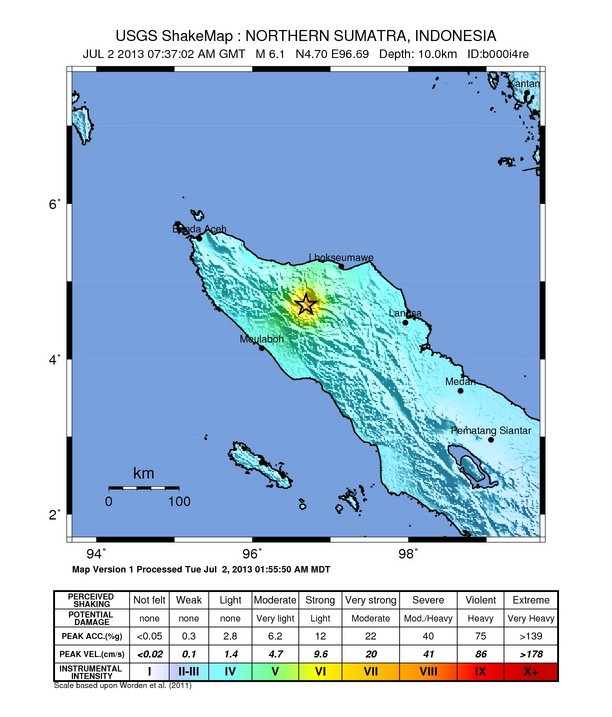