Moderate solar flare measuring M3.2 erupted from Region 1748 on May 17, 2013 peaking at 08:57 UTC. A type II and IV radio emissions were associated with the event. Type IV emissions occur in association with major eruptions on the Sun and are typically associated with strong coronal mass ejections and solar radiation storms.

It seems Earth will feel some of Sun's material from this flare. Slight CME impact is forecasted late on May 19th.

Additionally, a 10cm radio burst measuring 450 sfu was recorded. This can be indicative of significant radio noise in association with a solar flare. This noise is generally short-lived but can cause interference for sensitive receivers including radar, GPS, and satellite communications.

This is second M-class solar flare from this region in last 12 hours. AR 1748 is classified with Beta-Gamma-Delta magnetic configuration. It is capable of strong eruptions and moving into more geoeffective position. This same region was the source of moderate to very strong activity in last couple of days. Numerous C and M-class flares were recorded. 4 X-class flares erupted from this region on May 13/14 (X1.7 and X2.8 on May 13th, X3.2 and X1.2 on May 14th).

The positions and status of active regions have not changed since our last report. There are currently 10 numbered sunspot groups, active regions, on the solar disk. One to pay most attention to remains Region 1748, still classified with Beta-Gamma-Delta magnetic configuration and capable of strong eruptions. Region 1745 decayed to Beta magnetic field and is now posing little or no threat. It is, however, directly facing Earth today.

All other regions have Beta magnetic configuration. See their positions and sizes on the image below: 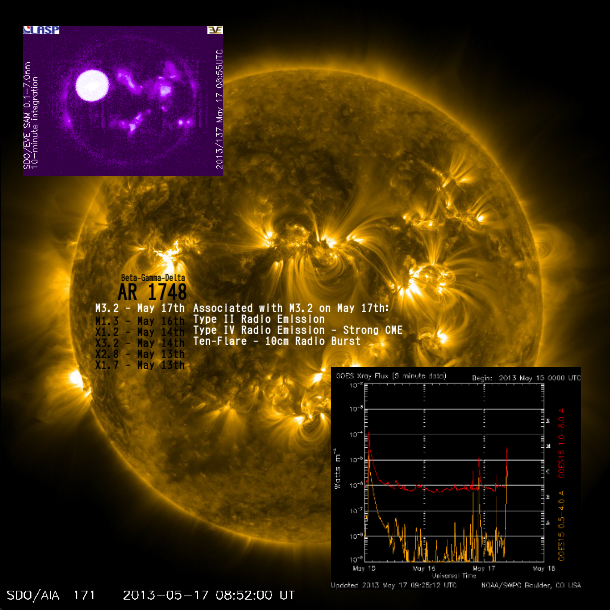