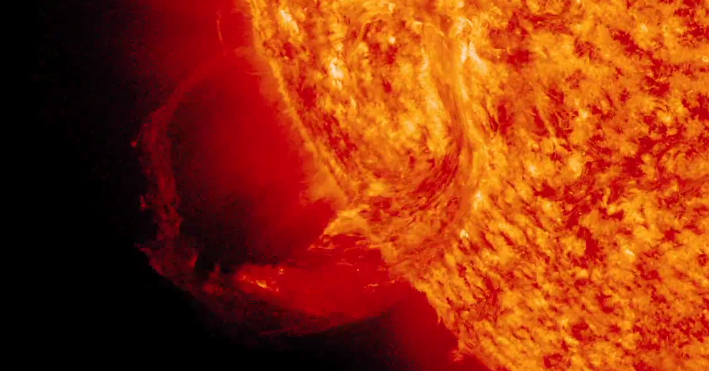 Experimental NASA research models, based on observations from the Solar Terrestrial Relations Observatory (STEREO) and ESA/NASA’s Solar and Heliospheric Observatory, show that the CME left the sun at speeds of around 575 miles per second, which is a fairly typical speed for CMEs. Historically, CMEs at this speed are mild.

Not to be confused with a solar flare, a CME is a solar phenomenon that can send solar particles into space and reach Earth one to three days later.

Earth-directed CMEs can cause a space weather phenomenon called a geomagnetic storm, which occurs when they connect with the outside of the Earth’s magnetic envelope, the magnetosphere, for an extended period of time. In the past, CME’s such as this have caused auroras near the poles but didn’t disrupt electrical systems on Earth or interfere with GPS or satellite-based communications systems.

“Filaments are formed in magnetic loops that hold relatively cool, dense gas suspended above the surface of the Sun,” explains David Hathaway, a solar physicist at the NASA Marshall Space Flight Center. “When you look down on top of them they appear dark because the gas inside is cool compared to the hot photosphere below. But when we see a filament in profile against the dark sky it looks like a giant glowing loop — these are called prominences and they can be spectacular.”