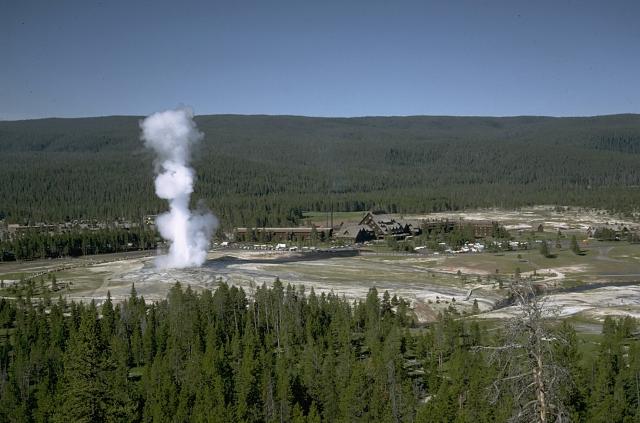 On Sunday, October 7, 2012 a small earthquake swarm occurred under the Yellowstone caldera. The quakes were few and very small and were no indicator of an impending eruption. On the contrary, it completely falls under what is normal behavior of an active caldera.

During the month of October 2012, the University of Utah reported 128 earthquakes were located in the Yellowstone National Park region. The largest were a pair of magnitude 3.1 events on October 14 at 8:55 PM and 9:21 PM MDT, located about 18 miles south-southwest of West Yellowstone, MT. These events were part of a swarm of 55 quakes recorded October 14 -16, with magnitudes ranging from M 0.9 to M 3.1

The swarm resumed briefly on October 26 with an additional 8 events, M 1.4 to M 2.3 located in the same area on the western edge of the Madison Plateau.

Yellowstone is presently the site of one of the world’s largest hydrothermal systems including Earth’s largest concentration of geysers.

The Yellowstone Plateau is centered on a youthful, active volcanic system with subterranean magma (molten rock), boiling, pressurized waters, and a variety of active faults with significant earthquake hazard. Within the next few decades, large and moderate earthquakes and hydrothermal explosions are certain to occur. Volcanic eruptions are less likely, but are ultimately inevitable in this active volcanic region.

In Questions about Yellowstone Volcanic History USGS writes that since the most recent giant caldera-forming eruption, 640,000 years ago, approximately 80 relatively nonexplosive eruptions have occurred. Of these eruptions, at least 27 were rhyolite lava flows in the caldera, 13 were rhyolite lava flows outside the caldera and 40 were basalt vents outside the caldera. Some of the eruptions were approximately the size of the devastating 1991 Pinatubo eruption in the Philippines, and several were much larger. The most recent volcanic eruption at Yellowstone, a lava flow on the Pitchstone Plateau, occurred 70,000 years ago.

During the three giant caldera-forming eruptions that occurred between 2.1 million and 640,000 years ago, tiny particles of volcanic debris (volcanic ash) covered much of the western half of North America, likely a third of a meter deep several hundred kilometers from Yellowstone and several centimeters thick farther away. Wind carried sulfur aerosol and the lightest ash particles around the planet and likely caused a notable decrease in temperatures around the globe.

How many giant eruptions have occurred in the Yellowstone National Park region and how large were they?

Volcanic activity began in the Yellowstone National Park region a little before about 2 million years ago. Molten rock ( magma) rising from deep within the Earth produced three cataclysmic eruptions more powerful than any in the world’s recorded history. The first caldera-forming eruption occurred about 2.1 million years ago. The eruptive blast removed so much magma from its subsurface storage reservoir that the ground above it collapsed into the magma chamber and left a gigantic depression in the ground – a hole larger than the state of Rhode Island. The huge crater, known as a caldera, measured as much as 80 kilometers long, 65 kilometers wide, and hundreds of meters deep, extending from outside of Yellowstone National Park into the central area of the Park (see map in question above for location information).

Later, activity shifted to a smaller region within the Island Park area of eastern Idaho, just southwest of Yellowstone National Park, and produced another large caldera-forming eruption 1.3 million years ago. Subsequent activity has been focused within the area of the National Park, and another huge eruption 640,000 years ago formed the Yellowstone caldera as we now see it.

The three caldera-forming eruptions, respectively, were about 6,000, 700, and 2,500 times larger than the May 18, 1980 eruption of Mt. St. Helens in Washington State. Together, the three catastrophic eruptions expelled enough ash and lava to fill the Grand Canyon.

In addition to the three climactic eruptions, activity associated with each of the three caldera cycles produced dozens or even hundreds of smaller eruptions that produced both lava and pyroclastic materials.

Featured image:  An eruption of Old Faithful, perhaps the world’s best known geyser, rises above Yellowstone’s Upper Geyser Basin. Old Faithful is a periodic geyser, with eruptions to heights of about 40 m at intervals of 30 to 100 minutes. Old Faithful Lodge to the right provides a rustic backdrop to the Upper Geyser Basin, which contains more geysers than are known altogether in the rest of the world. The forested ridge in the background is underlain by massive post-caldera rhyolitic lava flows of the Madison Plateau.