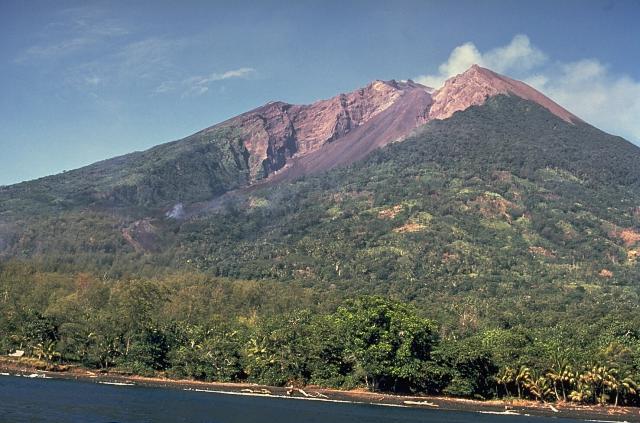 The 10-km-wide Manam Island, lying 13 km off the northern coast of mainland Papua New Guinea, is one of the country’s most active volcanoes.

ABC Radio Australia reported yesterday, June 4, 2012 that a new series of eruptions have begun and that warnings to residents have been made to take precautions.

Vents on the volcano are glowing at nights and explosions in the craters can be heard more than 15 kilometres away.

Ima Itakarai, the assistant director of the Rabaul Volcanology Observatory says it’s possibility of a major explosion cannot be ruled out, but it’s not imminent.

The volcano already claimed several lives over the last decade.

Four large radial valleys extend from the unvegetated summit of the conical 1807-m-high basaltic-andesitic stratovolcano to its lower flanks.

These “avalanche valleys,” regularly spaced 90 degrees apart, channel lava flows and pyroclastic avalanches that have sometimes reached the coast. Five small satellitic centers are located near the island’s shoreline on the northern, southern and western sides.

Two summit craters are present; both are active, although most historical eruptions have originated from the southern crater, concentrating eruptive products during much of the past century into the SE avalanche valley. Frequent historical eruptions, typically of mild-to-moderate scale, have been recorded at Manam since 1616.