A powerful eruption started at Manam volcano, Papua New Guinea at around 22:40 UTC on October 19, 2021, ejecting ash up to 15.2 km (50 000 feet) above sea level. The Aviation Color Code was raised to Red. The current population of the island is more than 4 000. About 8 of the 15 villages on the island were covered in volcanic clouds, according to media reports.

Lower-level plumes rose 4.6 – 5.5 km (15 000 – 18 000 feet) a.s.l. and drifted NW. Later that day a collapse of newly erupted material, as well deposits from the previous few weeks, produced a debris flow that originated at the head of the valley and descended the SW Valley.2

Speaking from the island, the Coordinator for the newly formed Manam Community Disaster Preparedness, James Sukua said volcanic activity started during the night (LT) of October 19 and continued to the next morning.3

Parts of the island starting from Baliau village all the way to Dugulava, were affected, Sukua said.

According to the small observatory instrument on the island, the scoria and mud fall from the volcano lasted for about 40 minutes, affecting food gardens and water sources.

Sukua said any assistance from the government is unlikely as this is the case most often, adding that whenever disaster strikes the government response is always very late.

After many years of witnessing the sloppiness of the government’s response to the Manam Volcano eruptions, the Manam Community on the island have initiated a local CSO to assist the people during disaster emergency. They are now asking the government to recognize this committee and see how it's operating. 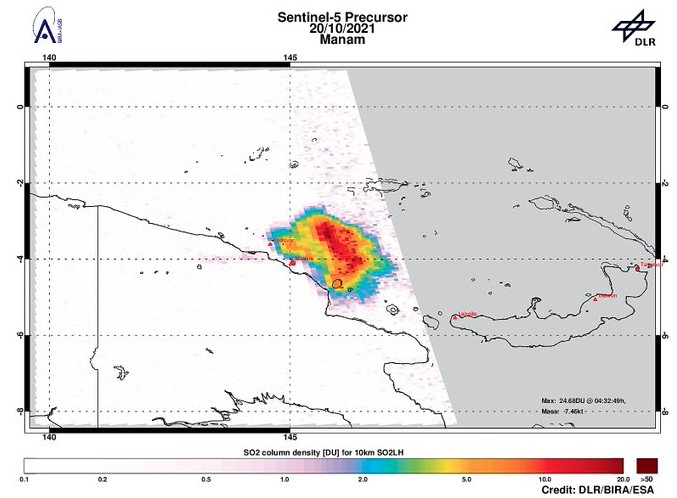 The Rabaul Volcano Observatory (RVO) reported that sporadic small ash emissions from Manam’s Southern Crater were observed starting at the end of September 2021.2

The Darwin VAAC noted that on October 18 an ash plume rose to 2.4 km (8 000 feet) a.s.l. and drifted NW. A thermal anomaly was visible in satellite images.

A series of high-level eruptions were reported at the volcano beginning on December 8, 2018, and lasting through January 24, 2019:

The 10 km (6.2 miles) wide island of Manam, lying 13 km (8 miles) off the northern coast of mainland Papua New Guinea, is one of the country's most active volcanoes. Four large radial valleys extend from the unvegetated summit of the conical 1 807 m (5 928 feet) high basaltic-andesitic stratovolcano to its lower flanks.