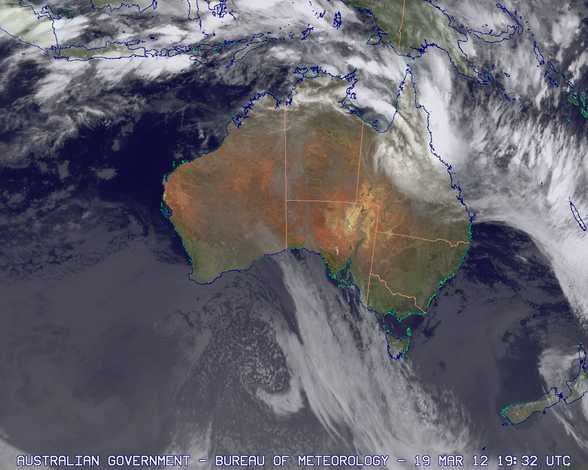 A disaster zone has been declared in parts of Townsville after a storm front described as the worst in four decades tore through the north Queensland city.

Premier Anna Bligh called for defence force assistance after winds of more than 130km/h wreaked havoc in the suburbs of Vincent, Aitkenvale, Pimlico and Gulliver early on Tuesday morning. She decribed them akin to “mini-tornadoes”. Ms Bligh said some storm victims could be out of their homes for months.

Roofs were ripped off, trees were split in two, and live powerlines were strewn on the streets. Up to 100 homes suffered varying degrees of damage, 25 lost their roofs, and six endured significant structural harm.

Three people were taken to hospital, one suffering head wounds. Another 10 required medical attention for cuts and abrasions. Four large businesses in the nearby Garbutt industrial estate were affected. Townsville Mayor Les Tyrell said it was the worst storm he could recall hitting the city.

“I’ve never seen anything like this before,” he said. “We had (Cyclone) Yasi, which was the biggest cyclone since the early 1970s, but there was very little structural damage. “But this thing was so destructive … it just tore houses apart.” Ms Bligh declared a disaster area across the affected suburbs, giving victims access to cash grants and other support. Taking a break from the election campaign to visit the worst-hit streets, Ms Bligh said it was fortunate no lives were lost. “These quiet suburban streets of Townsville have suffered a shocking and devastating event,” Ms Bligh told reporters. “Its force was obviously ferocious.” She said the defence force had been called in to aid the recovery. “A number of these people aren’t going to be back in their homes for a matter of months, and we will be helping people to relocate for the short term,” she said.

Liberal National Party (LNP) leader Campbell Newman also visited victims of the storm on Tuesday. Around 6500 Townsville residents remained without power on Tuesday afternoon. An Ergon Energy spokesman said the electricity would be restored to all, but the most severely affected areas by Wednesday morning. Mr Tyrell said the clean-up had started in some streets by Tuesday afternoon, but he said the presence of live wires would hinder council crews.

He said some of the damaged homes would likely contain asbestos and the council had contacted Queensland Health for advice. Ms Bligh said personal hardship grants of $180 per person, or $900 for a family of five or more, would be available. Low-income families would be eligible for grants of $5300 to replace uninsured household items, Ms Bligh said. The Commonwealth Bank said it would offer emergency assistance including loan restructuring for customers affected by the storm. A severe weather warning remains in place for much of north Queensland, as the monsoon trough that caused the storm moves south. (RSOE-EDIS – March 20, 2012 – UTC)