A new tropical cyclone has formed off the Pilbara coast, Australia. On March 13th, 2012 Tropical Cyclone Lua (Category 1) was located at 8 pm WST near 18.5S 114.6E, that is 340 km northwest of Karratha and 385 km north of Exmouth and slow moving. TC Lua lies well north of the west Pilbara coast and is expected to slowly intensify and drift northwards for the next 24 hours. The system is then expected to continue intensifying and move southeast towards the east Pilbara coast later in the week.

Second active system - Tropical Low - A Cyclone WARNING continues for coastal and island communities from Cape Hotham to Kalumburu, including Darwin and the Tiwi Islands, and inland to Batchelor, Adelaide River and Daly River. At 9:30 pm CST <8:00 pm wst > today a Tropical Low was estimated to be 315 kilometres west of Darwin and 215 kilometres northwest of Port Keats and moving south at 7 kilometres per hour.

The tropical low appears to be taking a slow southerly track but is expected to curve southeast towards the western Top End coast early Wednesday. The low is expected to develop into a tropical cyclone on Wednesday morning and is likely to cross the southwest coast of the Top End on Wednesday night. 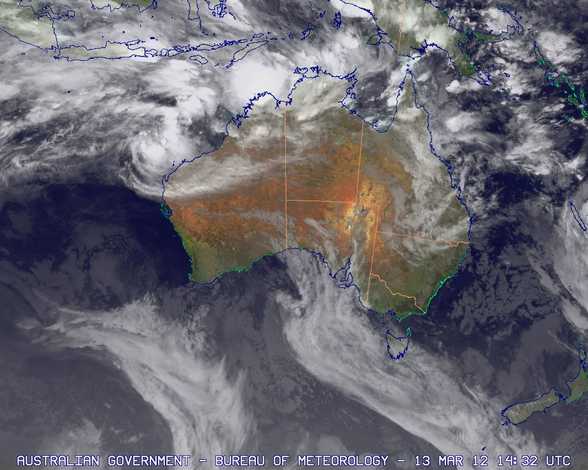 More information and latest updates can be found at www.bom.gov.au