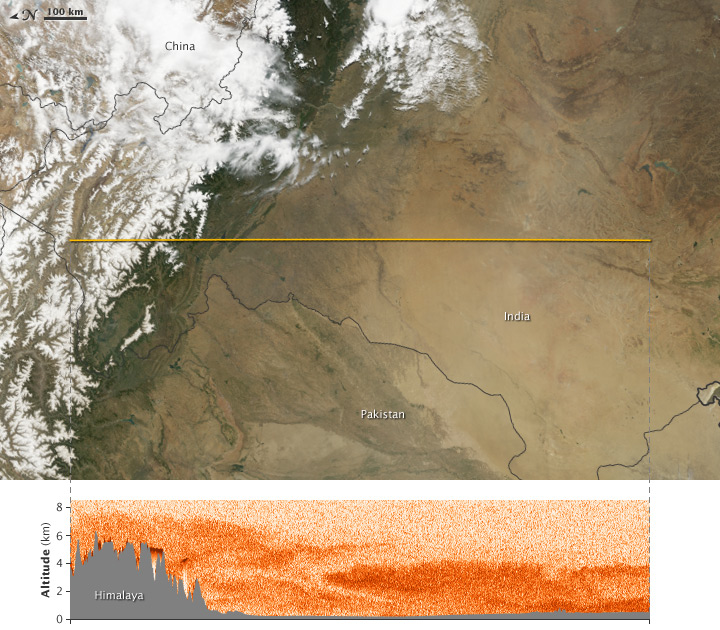 In the days and weeks before the monsoon, heat builds over India. Hot air rises over the baked earth and westerly winds rush in to fill the void, bringing dust-laden air from the deserts of southwest Asia and the Arabian Peninsula. Through April, May, and June, as monsoon conditions build, the air over the Ganges River plain grows thick with dust, smoke, and haze. Air quality over India is at its worst at this time of year. Finally, in mid- to late-June, the winds shift and cleansing monsoon rains fall. 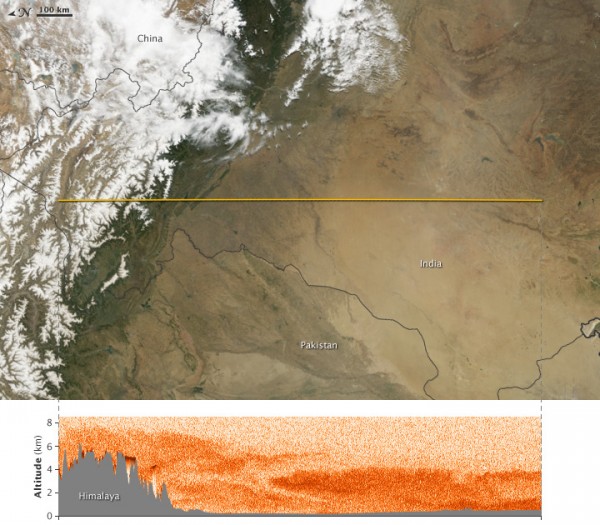 This image provides a profile of the pre-monsoon air over India on May 12, 2007. The lower image was made with data from the CALIPSO satellite, which sends pulses of laser light through the atmosphere at night and measures the light signal that returns to the sensor. This measurement reveals the concentration of particles—ice, dust, soot, and so forth— in the atmosphere. The dark orange areas in the profile show where the particle concentration was most dense. Pale orange and white reveal fewer particles.

The top image is a daytime scene captured that same day by the Moderate Resolution Imaging Spectroradiometer (MODIS) on the Terra satellite. The yellow line across the top image shows the path of the satellite on May 12 when it collected the profile in the lower image. The dense particle concentration included a combination of dust, smoke from fires, and urban smog. Measurements from other satellites and ground-based instruments revealed that the bulk of the pollution was dust.

Dust carried on westerly winds moves over the Gangetic Plain and hits a barrier: the massive Himalayas. Trapped against the mountain front, the dust builds until concentrations are higher than at any other time of year. The rising of hot air from the land, combined with the incoming winds, push the dust and haze high into the atmosphere along the front of the Himalaya. In this image, the bulk of the dust reaches about four kilometers in altitude; along the mountains, it reaches six to seven kilometers. (The particles over the mountains and the Tibetan Plateau are probably ice clouds, but may also contain some dust.)

This dust and haze over the Ganges Plain may increase the intensity of monsoon rains. The dust particles and soot both absorb energy, heating the atmosphere. The added heat pushes the air higher than it would otherwise rise. The rising air sucks up more air, and when that air is moist, the monsoon circulation may strengthen, leading to more rainfall during the early summer.

The high dust and haze also might hasten the melting of snow in the Himalayas. Particles settle on the surface, darkening the snow. White snow reflects energy, but the particle-darkened surface absorbs it, causing the snow to melt faster. This has been demonstrated in other regions. (EarthObservatory)