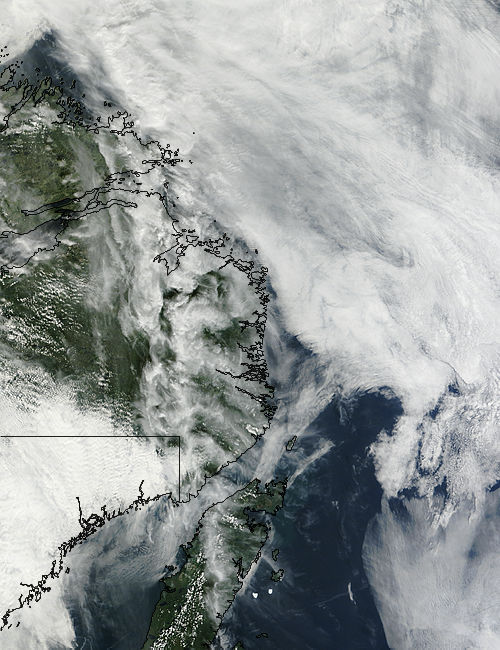 On August 22, 2011, Irene, the first hurricane of the Atlantic hurricane season, was spinning over the Dominican Republic and Puerto Rico, lashing the islands with wind and rain. The Moderate Resolution Imaging Spectroradiometer (MODIS) on NASA’s Terra satellite captured this natural-color image at 15:20 UTC on that same day. 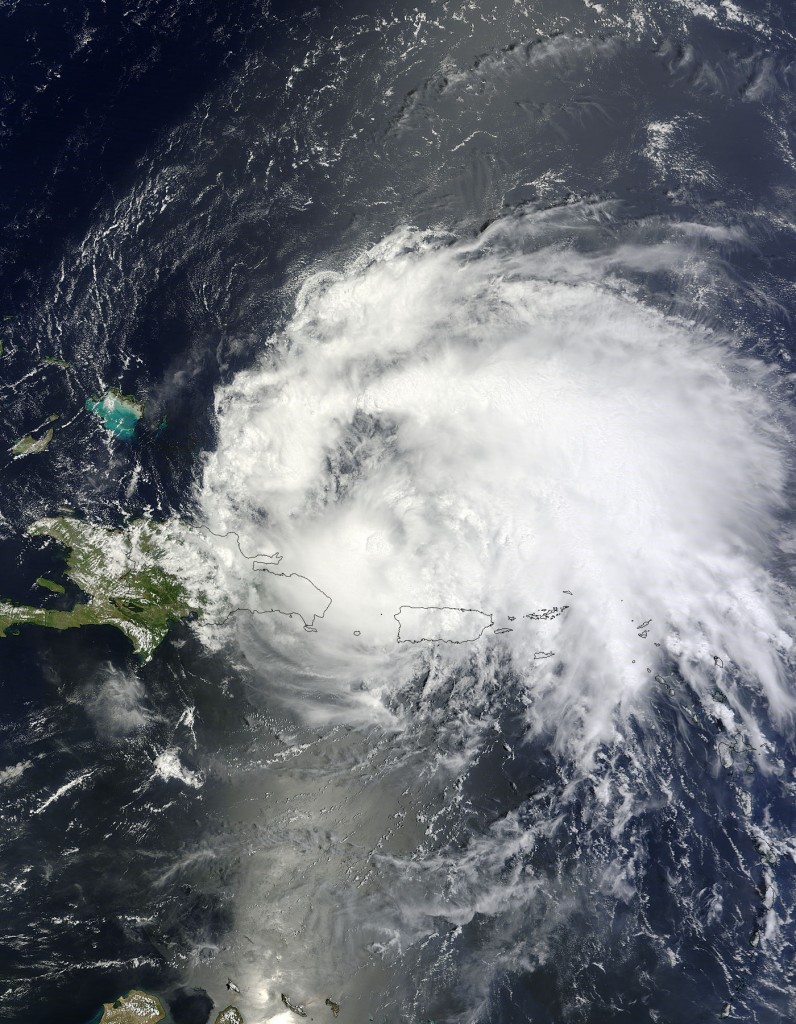 Hurricane Irene first formed as a tropical storm east of the  Leeward Islands on August 20, 2011. By August 22, the storm had strengthened to a Category 1 hurricane. At 2:00 p.m. Atlantic Standard Time on August 22, the U.S. National Hurricane Center (NHC) reported that Irene had maximum sustained winds of 80 miles (130 kilometers) per hour, with higher gusts. The storm was located about 150 miles (240 kilometers) west-northwest of San Juan, Puerto Rico.

On August 23, U.S. President Barack Obama signed an emergency declaration for Puerto Rico due to the widespread damage suffered from the storm. The Emergency Operations Director of the country reported that more than 800,000 homes were without power and roughly 28-percent of the island lacked running water. The island of Vieques was reported to be completely without power. Despite the damage, no fatalities have been reported from these islands.

On that same day, the storm lashed the Dominican Republic with 100 mph winds and heavy rain, according to the National Hurricane Center. At 21:00 UTC, it carried top winds of 90 miles per hour and was centered 110 miles east of Great Inagua Island in the southern Bahamas. The National Hurricane Center warned that as Irene passed, a storm surge up to 11 feet higher than normal tide levels could wash over parts of the Bahamas, with a surge to 8 feet in the Turks and Caicos Islands.

At 11:00 pm EDT on August 23 (03:00 August 24 UTC), the National Weather System reported that the storm’s wind speed made it a Category 1 on the Saffir-Simpson Hurricane Wind Scale. Strengthening is expected, and Irene is predicted to become a major hurricane during the next day or so. Current storm track predictions suggest that the storm will threaten the East Coast of the United States; some forecasters warn that the storm has the potential be the strongest storm to hit the eastern US in decades. Evacuations are planned to begin on August 24 for parts of North Carolina. (MODIS)