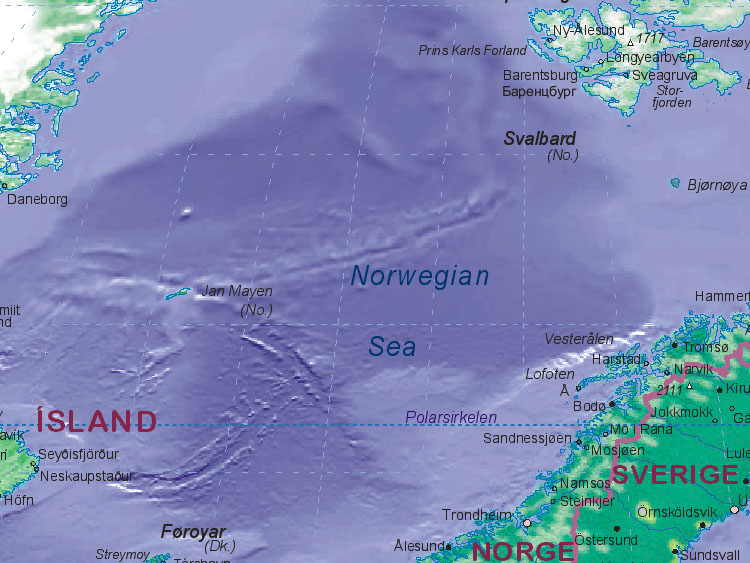 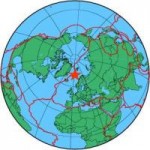 Unlike many other seas, most of the bottom of the Norwegian Sea is not part of a continental shelf and therefore lies at a great depth of about two kilometres on average. Rich deposits of oil and natural gas are found under the sea bottom and are being explored commercially, in the areas with sea depths of up to about one kilometre. The coastal zones are rich in fish that visit the Norwegian Sea from the North Atlantic for spawning. The warm North Atlantic Current ensures relatively stable and high water temperatures, so that unlike the Arctic seas, the Norwegian Sea is ice-free throughout the year. 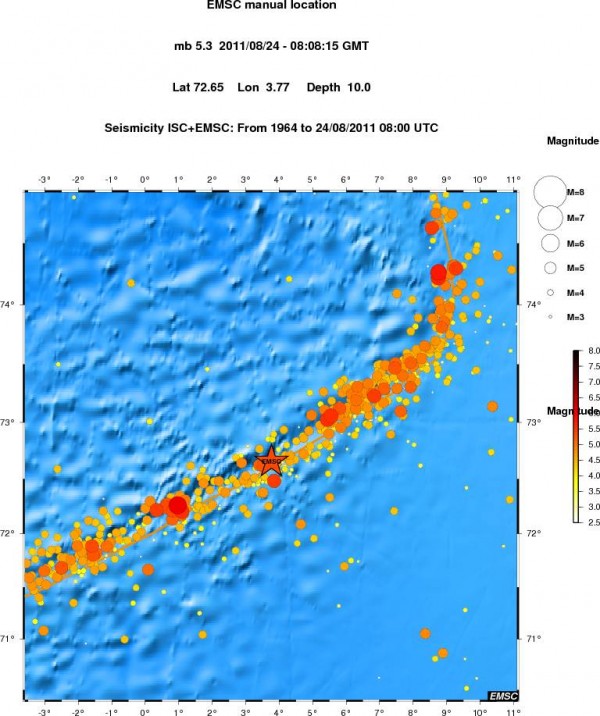 The Norwegian Sea was formed about 250 million years ago, when the Eurasian plate of Norway and the North American Plate, including Greenland, started to move apart. The existing narrow shelf sea between Norway and Greenland began to widen and deepen. The present continental slope in the Norwegian Sea marks the border between Norway and Greenland as it stood approximately 250 million years ago. In the north it extends east from Svalbard and on the southwest between Britain and the Faroes. This continental slope contains rich fishing grounds and numerous coral reefs. Settling of the shelf after the separation of the continents has resulted in landslides, such as the Storegga Slide about 8,000 years ago that induced a major tsunami.

The coasts of the Norwegian Sea were shaped during the last Ice Age. Large glaciers several kilometres high pushed into the land, forming fjords, removing the crust into the sea, and thereby extending the continental slopes. This is particularly clear off the Norwegian coast along Helgeland and north to the Lofoten Islands. The Norwegian continental shelf is between 40 and 200 kilometres wide, and has a different shape from the shelves in the North Sea and Barents Sea. It contains numerous trenches and irregular peaks, which usually have an amplitude of less than 100 metres, but can reach up to 400 metres. They are covered with a mixture of gravel, sand, and mud, and the trenches are used by fish as spawning grounds. Deeper into the sea, there are two deep basins separated by a low ridge (its deepest point at 3,000 m) between the Vøring Plateau and Jan Mayen island. The southern basin is larger and deeper, with large areas between 3,500 and 4,000 metres deep. The northern basin is shallower at 3,200–3,300 metres, but contains many individual sites going down to 3,500 metres. Submarine thresholds and continental slopes mark the borders of these basins with the adjacent seas. To the south lies the European continental shelf and the North Sea, to the east is the Eurasian continental shelf with the Barents Sea. To the west, the Scotland-Greenland Ridge separates the Norwegian Sea from the North Atlantic. This ridge is on average only 500 metres deep, only in a few places reaching the depth of 850 metres. To the north lie the Jan Mayen Ridge and Mohns Ridge, which lie at a depth of 2,000 metres, with some trenches reaching depths of about 2,600 meters.

The most important products of the Norwegian Sea are no longer fish, but oil and especially gas found under the Norwegian Sea. Norway started undersea oil production in 1993, followed by development of the Huldra gas field in 2001.  The large depth and harsh waters of the Norwegian Sea pose significant technical challenges for offshore drilling.  Whereas drilling at depths exceeding 500 meters has been conducted since 1995, only a few deep gas fields have been explored commercially. The most important current project is Ormen Lange (depth 800-1,100 m), where gas production started in 2007. With reserves of 1.4×1013 cubic feet, it is the major Norwegian gas field. It is connected to the Langeled pipeline, currently the world’s longest underwater pipeline, and thus to a major European gas pipeline network. Several other gas fields are being developed. A particular challenge is the Kristin field, where the temperature is as high as 170 °C and the gas pressure exceeds 900 bar (900 times the normal pressure). Further north are Norne and Snøhvit. (Wikipedia)