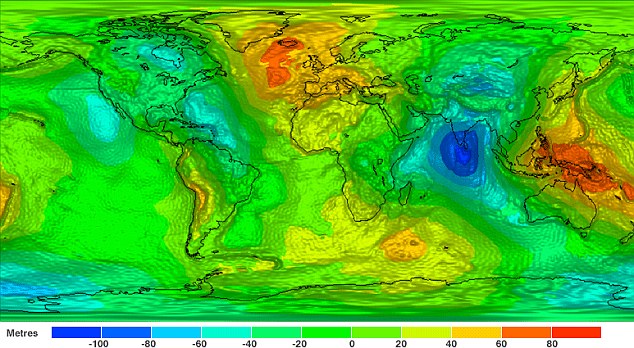 After just two years in orbit, ESA's GOCE satellite has gathered enough data to map Earth's gravity with unrivaled precision. Scientists now have access to the most accurate model of the 'geoid' ever produced to further our understanding of how Earth works.

The new geoid was unveiled at the Fourth International GOCE User Workshop hosted at the Technische Universität München in Munich, Germany. Media representatives and scientists from around the world have been treated to the best view yet of global gravity. The geoid is the surface of an ideal global ocean in the absence of tides and currents, shaped only by gravity. It is a crucial reference for measuring ocean circulation, sea-level change and ice dynamics – all affected by climate change. 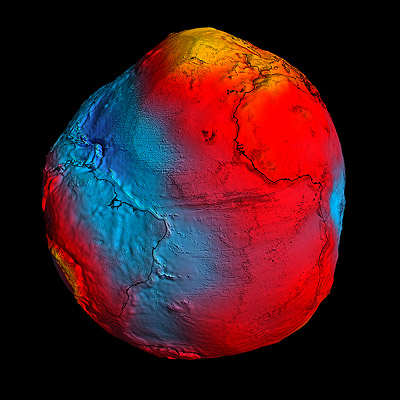 Prof. Reiner Rummel, former Head of the Institute for Astronomical and Physical Geodesy at the Technische Universität München, said: "We see a continuous stream of excellent GOCE gradiometry data coming in. With each new two-month cycle, our GOCE gravity field model is getting better and better. Now the time has come to use GOCE data for science and applications. I am particularly excited about the first oceanographic results. They show that GOCE will give us dynamic topography and circulation patterns of the oceans with unprecedented quality and resolution. I am confident that these results will help improve our understanding of the dynamics of world oceans."

Thee gravity data from GOCE are helping to develop a deeper knowledge of the processes that cause earthquakes, such as the event that recently devastated Japan. Since this earthquake was caused by tectonic plate movement under the ocean, the motion cannot be observed directly from space. However, earthquakes create signatures in gravity data, which could be used to understand the processes leading to these natural disasters and ultimately help to predict them.

The GOCE satellite was launched in March 2009 and has now collected more than 12-months of gravity data. GOCE has achieved many firsts in Earth observation. Its gradiometer – six highly sensitive accelerometers measuring gravity in 3D – is the first in space. It orbits at the lowest altitude of any observation satellite to gather the best data on Earth's gravity. The design of this sleek one-tonne satellite is unique.

In addition, GOCE uses an innovative ion engine that generates tiny forces to compensate for any drag the satellite experiences as it orbits through the remnants of Earth's atmosphere. (ESA) 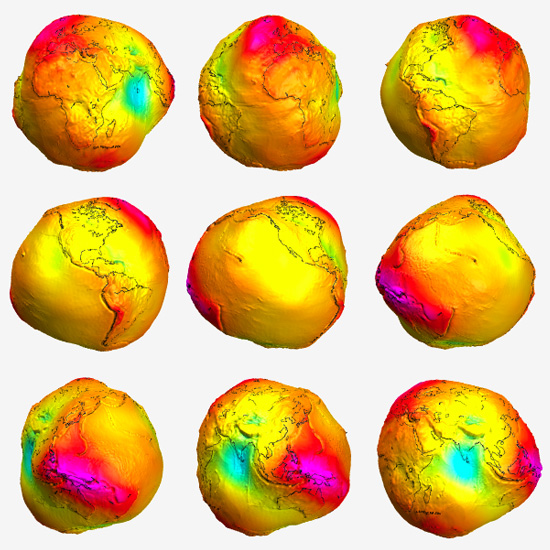 The gravitational stress on the planet can clearly be seen especially in areas like the Pacific Ring of Fire, Japan, the northern Mid-Atlantic Ridge near Iceland, and the Nazca Plate bordering Chile. Additional geological deformation caused by massive megathrust earthquakes will increase the planet’s instability further by acerbating gravitational stress incurred during angular momentum cycles. The buldges on the planet would also be the centers of gravity dominant in the event of the catastrophic planetary roll.

Also visible is the gravitational anomaly of the blue vortex at the base of India near the Sunda Trench.