A new research, conducted by the scientists at the National Center for Atmospheric Research (NCAR) shows the intense summer storms that produce extreme rainfall may increase by over 400% across portions of the US, including the Gulf Coast, Atlantic Coast, and the Southwest, by the end of the century.

The study also revealed that the intensity of individual events may increase up to 70% in some regions, which means that if a certain storm produced 50.8 mm (2 inches) of rainfall until now, it may produce up to 89 mm (3.5 inches) of precipitation in the future. The research also suggests parts of the US could experience up to five intense storms in the season.

"These are huge increases. Imagine the most intense thunderstorm you typically experience in a single season. Our study finds that, in the future, parts of the US could expect to experience five of those storms in a season, each with an intensity as strong or stronger than current storms," said Andreas Prein, an NCAR scientist and a lead author of the study.

“Extreme precipitation events affect our infrastructure through flooding, landslides, and debris flows. We need to better understand how these extreme events are changing. By supporting this research, NSF is working to foster a safer environment for all of us,” said Anjuli Bamzai, program director in NSF’s Directorate for Geosciences. 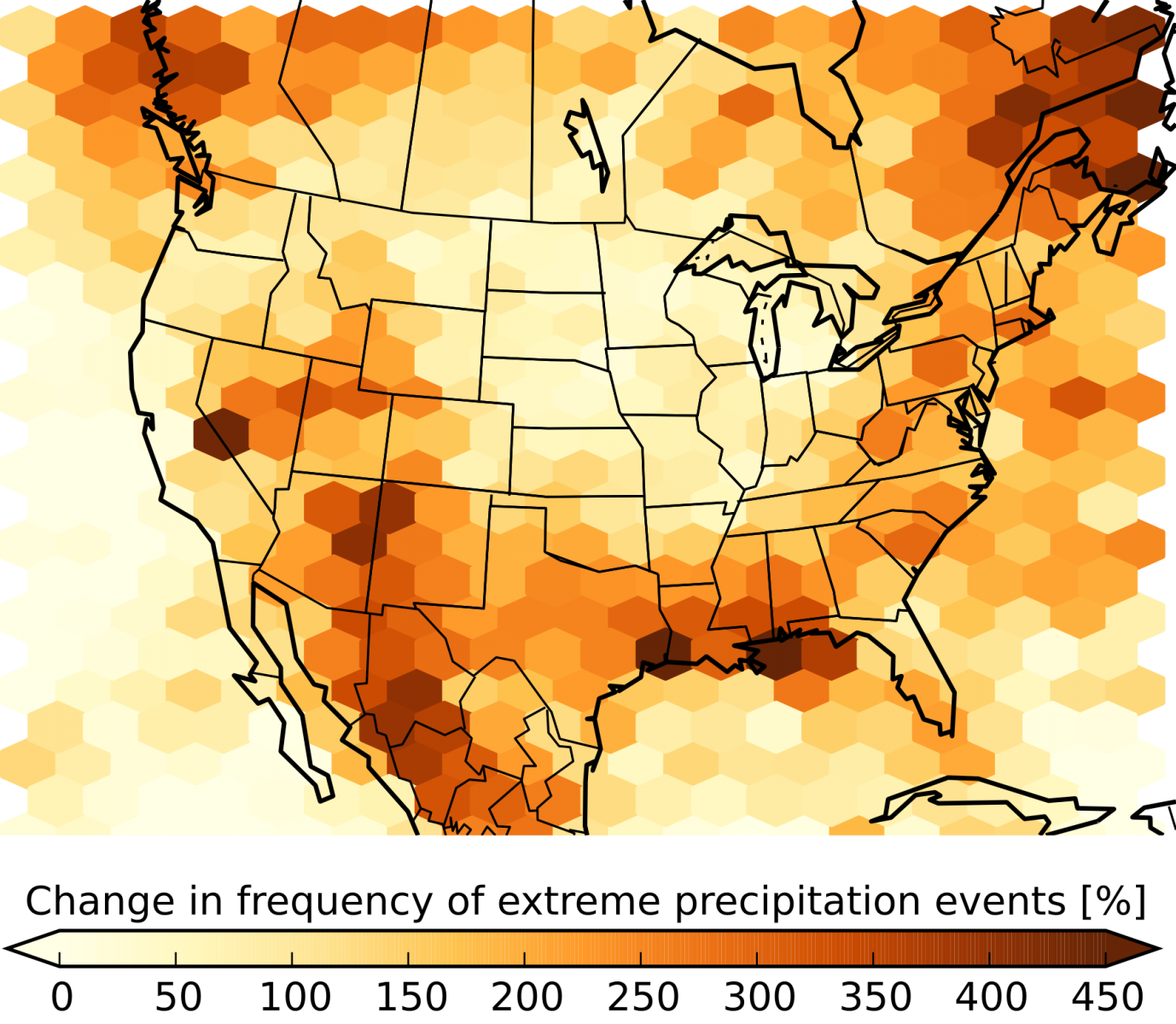 The expected increase in the number of summertime storms that produce extreme precipitation at century's end compared to the period 2000 – 2013. Image credit: UCAR/Andreas Prein/NCAR.

Such a discovery is not unexpected. As the climate of our planet changes and the atmosphere warms up, it becomes more capable of holding increased amounts of water, meaning it can also produce more intense rainfalls. Increased amounts of precipitation have already been reported across the US. The current climate models, however, are not capable of simulating such downpours due to its coarse resolution. Because of this, the scientists have found it hard to estimate possible future changes in the frequency and intensity of the storms.

For the new research, the scientists have utilized a new dataset produced by the NCAR-based Weather Research and Forecasting Model (WRF) at a resolution of 4 km (2.5 miles), sufficient to allow the simulation of individual storm systems. It took the team one year to run the model on the Yellowstone system at the NCAR-Wyoming Supercomputing Center.

The experts investigated how the storms which happened in the period between 2000 and 2013 may look like if, instead, they took place in a climate with temperatures 5 °C (9 °F) higher. Temperatures of such values are expected by the end of this century, assuming the unchanged present day greenhouse gas emissions.

The downside of the research is that it doesn't show possible changes that would most likely occur to storm tracks or weather systems. On the plus side, it does allow the scientists to more easily isolate the effects of additional heat and moisture on the formation of the future storms.

"The ability to simulate realistic downpours is a quantum leap in climate modeling. This enables us to investigate changes in hourly rainfall extremes that are related to flash flooding for the very first time. To do this took a tremendous amount of computational resources," explained Prein.

Research results suggest the number of summer storms with extreme amounts of precipitation will likely increase across the US. The Midwest could experience an increase from zero to 100% in the regions of Nebraska, Dakotas, Minnesota, and Iowa while the Gulf Coast, Alabama, Louisiana, Texas, New Mexico, Arizona, and Mexico could witness an increase between 200 and over 400%.

Currently, the strongest rainfall is produced when the daily average temperatures vary between 20 and 25 °C (68 to 77 °F) in the conditions of high atmospheric moisture. As the temperatures get too high, the rainstorms either weaken or don't form at all, as the increase of the moisture doesn't keep up with the increase in temperatures.

New research suggests the storms in a more humid atmosphere will likely continue to intensify until the temperatures reach 30 °C (86 °F).

"Understanding how climate change may affect the environments that produce the most intense storms is essential because of the significant impacts that these kinds of storms have on society," concluded Prein.