The cooling trend observed in the late 20th century at the transition between the troposphere and stratosphere at an altitude of about 15 kilometers is usually believed to be caused by human influences. Now, climate scientists from Kiel And Bergen (Norway) have published a study in the international journal Scientific Reports showing that the cooling could also be part of a natural decadal variation which is controlled by the water temperature of the Pacific.

Water is extremely important for our planet in all its forms. Even in the atmosphere, the water vapor affects our lives by impacting weather and climate. Its fluctuations at altitudes between 15 and 50 km (9 and 31 miles), in the stratosphere, are especially important for climate fluctuations. The amount of gas which reaches the stratosphere depends on the temperature in the transition layer, called the tropopause, between the underlying troposphere and upper layer stratosphere.

The scientists have utilized the data in the period between 1979 and 2013 and existing climate models for the research, which allowed to extend the study period to almost 150 years. The established model has allowed them to inspect both the human and natural influences, and separate their impact, according to Prof. Dr. Katja Matthes, a climate researcher at GEOMAR and the study's co-author.

"It has long been thought that human influences already affected the tropopause. However, it seems that natural variability is still the dominating factor," said Dr. Wuke Wang from GEOMAR, lead author of the study.

A climatic phenomenon called the Pacific Decadal Oscillation (PDO) influences the climate and ecosystems in the Pacific and the global mean temperature of our planet: "This natural variation with decadal timescale leads to anomalously high or low water temperatures of the Pacific."

The mechanism responsible for regulating the temperatures at the stratosphere's boundary has been demonstrated by the study for the first time. The newest results are in direct contrast with existing hypotheses about the temperature variability of the tropical tropopause. The researchers noticed a cooling trend which began in 1970s and presumed it was caused by anthropogenic factors, especially with an increase in greenhouse gases.

"However, this assumption was based on a rather patchy data base and simplified climate models. Our study shows that the cooling of the tropical tropopause does not have to be a one-way street but could also be part of a natural fluctuation which extends over several decades," explained Professor Matthes.

The research has direct implications for the general climate research. The tropopause temperature affects the amount of water vapor that enters into the stratosphere. The more abundant the water vapor is, the more the surface temperatures increase. The temperature in tropopause is also affected by the anthropogenic climate change, an effect which could become more pronounced over the coming decades. 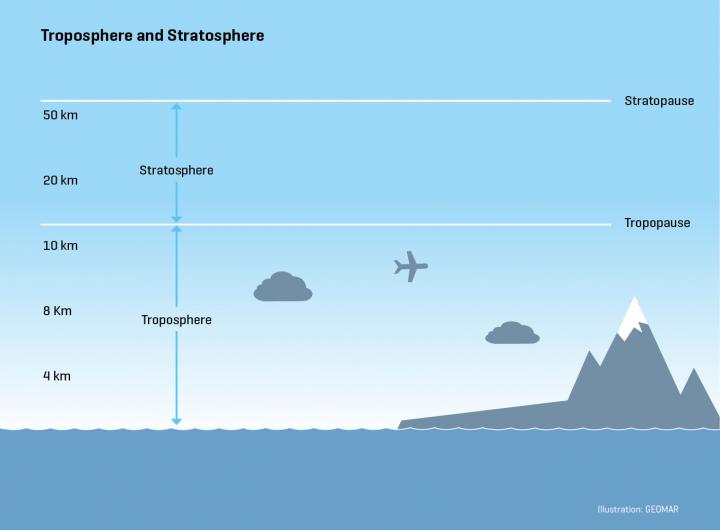 Schematic diagram of the atmospheric layers from the surface to the stratosphere. Image credit: C. Kersten, GEOMAR

"Only if we can clearly distinguish natural variability from anthropogenic influences, we can make reliable forecasts for the future development of our climate," Prof. Matthes concluded.

Featured image: Schematic diagram of the atmospheric layers from the surface to the stratosphere. Image credit: C. Kersten, GEOMAR