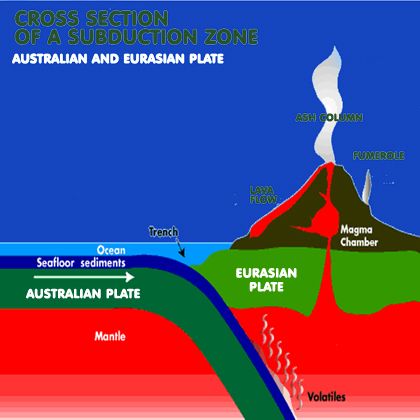 IceAgeNow posted a letter from a concerned reader writing about new hot spring formed in the area of Cass Bay near Christchurch. There were also various reports recently about new hot springs boiling in the peninsula and people are reporting the stench of sulphur emanating from the harbor area.

Navy and army are apparently combing the area with geological survey tools. Residents are scarred that Ruaumoko volcano is coming to life after 36 million liters of water mysteriously disappeared from a reservoir in Huntsbury following the February 22nd 6.3 earthquake in Christchurch. In past 7 days there were 88 earthquakes reported in Christchurch.

Subduction zones always have associated volcanoes inland from the point of contact and on the east coast of the South Island are several, each one occupied by a major town or city: Christchurch, Timaru, Oamaru and Dunedin. Subduction zone volcanoes are never extinct, only dormant. New Zealand in general and the South Island especially sits astride a subduction zone where the sea floor on the west side is pushing under the sea floor on the east side causing uplift. 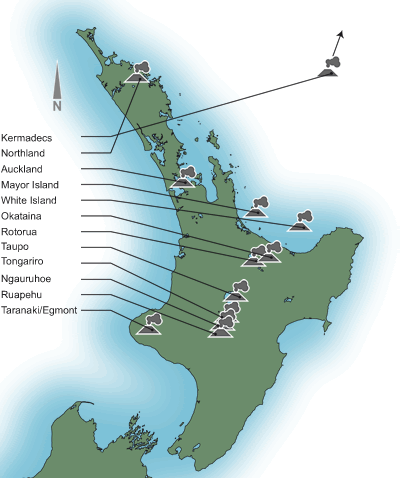 Volcanoes of very fine silt have sprung up around the Christchurch area since the initial quake, some as high as 2 meters have been likened to termite hills. These cones seem be linked to the smell of sulphur in some places.

Banks Peninsula forms the most prominent volcanic feature of the South Island. Geologically, the peninsula comprises the eroded remnants of two large shield volcanoes (Lyttelton fand Akaroa). It was formed as offshore islands, with the volcanoes reaching to about 1,500 m above sea level. Two dominant craters formed Lyttelton and Akaroa Harbours.

New Zealand lies on the rim of the Pacific tectonic plate which is the same fracture in the earth's crust that passes through Japan and the west coast of the United States. This fracture passes through both the North and South Islands and causes high mountains in both islands, but the geological process are different. In the South Island, the Pacific and Indo-Australian plates are smashing in to each other. This collision has created the spectacular Southern Alps mountain range.

In the North Island, one tectonic plate is sliding under the other, and the result of this geological process is volcanic activity. The vast majority of thermal activity in the North Island is centered in and around Rotorua and the Central Plateau area, which makes up the center of the island. 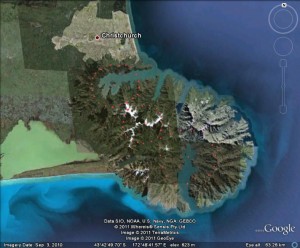 The biggest and most dangerous volcano in New Zealand and the world, is actually Lake Taupo which is New Zealand's largest lake, and is located in the center of the North Island. This volcano last erupted in the year 186 AD, and erupts approximately once every 2000 years. This eruption was over 50 times the magnitude of the Mt St Helen's eruption. Mt St Helens moved 3 cubic kilometers of earth, and Krakatoa (the biggest in recent times) in Indonesia moved 8 cubic kilometers, compared to 110 cubic kilometers for Taupo.