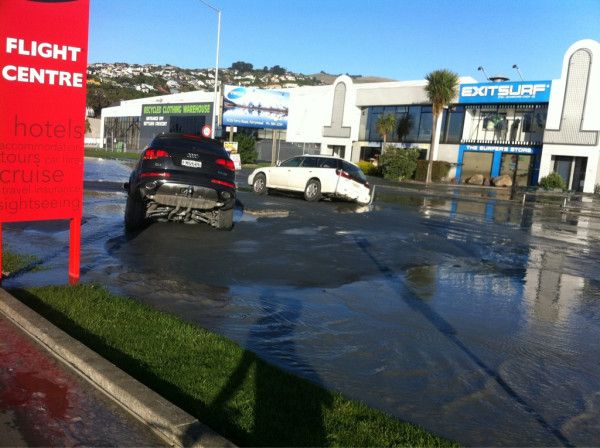 Soil liquefaction describes a phenomenon whereby a saturated soil substantially loses strength and stiffness in response to an applied stress, usually earthquake shaking or other sudden change in stress condition, causing it to behave like a liquid.

In soil mechanics the term “liquefied” was first used by Hazen in reference to the 1918 failure of the Calaveras Dam in California. He described the mechanism of flow liquefaction of the embankment dam as follows:
If the pressure of the water in the pores is great enough to carry all the load, it will have the effect of holding the particles apart and of producing a condition that is practically equivalent to that of quicksand… the initial movement of some part of the material might result in accumulating pressure, first on one point, and then on another, successively, as the early points of concentration were liquefied.

The phenomenon is most often observed in saturated, loose (low density or uncompacted), sandy soils. This is because a loose sand has a tendency to compress when a load is applied; dense sands by contrast tend to expand in volume or ‘dilate’. If the soil is saturated by water, as exists when the soil is below the ground water table or sea level, then water fills the gaps between soil grains (‘pore spaces’). In response to the soil compressing, this water increases in pressure and attempts to flow out from the soil to zones of low pressure (usually upward towards the ground surface). However, if the loading is rapidly applied and large enough, or is repeated many times (e.g. earthquake shaking, storm wave loading) such that it does not flow out in time before the next cycle of load is applied, the water pressures may build to an extent where they exceed the contact stresses between the grains of soil that keep them in contact with each other. These contacts between grains are the means by which the weight from buildings and overlying soil layers are transferred from the ground surface to layers of soil or rock at greater depths. This loss of soil structure causes it to lose all of its strength (the ability to transfer shear stress) and it may be observed to flow like a liquid (hence ‘liquefaction’).

Although the effects of liquefaction have been long understood, it was more thoroughly brought to the attention of engineers after the 1964 Niigata earthquake and 1964 Alaska earthquake. It was also a major factor in the destruction in San Francisco’s Marina District during the 1989 Loma Prieta earthquake, and in Kobe Port during the 1995 Great Hanshin earthquake. More recently liquefaction was largely responsible for extensive damage to residential properties in the eastern suburbs and satellite townships of Christchurch, New Zealand during the 2010 Darfield earthquake and more extensively again following the Christchurch earthquakes that followed in early and mid 2011.

The building codes in many developed countries require engineers to consider the effects of soil liquefaction in the design of new buildings and infrastructure such as bridges, embankment dams and retaining structures.

Soil liquefaction induced by earthquake shaking is a major contributor to urban seismic risk. The pressures generated during large earthquakes with many cycles of shaking can cause the liquefied sand and excess water to force its way to the ground surface from several metres below the ground. This is often observed as “sand boils” also called “sand blows” or “sand volcanoes” (as they appear to form small volcanic craters) at the ground surface. The phenomenon may incorporate both flow of already liquefied sand from a layer below ground, and a quicksand effect whereby upward flow of water initiates liquefaction in overlying non-liquefied sandy deposits due to buoyancy.

The other common observation is land instability – cracking and movement of the ground down slope or towards unsupported margins of rivers, streams, or the coast. The failure of ground in this manner is called ‘lateral spreading’, and may occur on very shallow slopes of angles of only 1 or 2 degrees from the horizontal.

One positive aspect of soil liquefaction is the tendency for the effects of earthquake shaking to be significantly damped (reduced) for the remainder of the earthquake. This is because liquids do not support a shear stress and so once the soil liquefies due to shaking, subsequent earthquake shaking (transferred through ground by shear waves) is not transferred to buildings at the ground surface.

Studies of liquefaction features left by prehistoric earthquakes, called paleoliquefaction or paleoseismology, can reveal a great deal of information about earthquakes that occurred before records were kept or accurate measurements could be taken. (Wikipedia)