A strong and very shallow earthquake measuring M6.0 on the Richter scale was registered in a sparsely populated area of central South Island, New Zealand at 17:48 UTC on January 5, 2015 (06:48 local time on January 6). GeoNet is reporting depth of 5 km. USGS registered this quake as M5.6 at a depth of 9.1 km (5.7 miles).

GeoNet scientists named the quake as M6.0 Wilberforce Earthquake and warned a swarm of aftershocks can be expected in the coming days and weeks.

The initial location and magnitude were affected by a small (about magnitude 2.0) foreshock just five seconds prior to the main earthquake. This skewed the location further to the east, which also confused the magnitude estimation, GeoNet said in a statement.

"Our duty seismologist has confirmed that this earthquake was not associated with the Alpine Fault," the statement continues. "The Alpine Fault is more than 20 kilometres west of the location of this earthquake. We do not currently know which fault the earthquake was on; it may be one of several already identified faults or a previously unknown fault.  You can find out more information about why we may not know a fault exists until an earthquake occurs here.

The intensity of this quake is considered severe at the location. As of 12:30 p.m., there have already been more than 3 000 felt reports from as far south as Invercargill to the various places mainly in the lower North Island. There have been dozens of aftershocks located so far since the initial earthquake. The largest aftershock so far has been a magnitude 4.7. In typical aftershock sequences where the mainshock is magnitude 6.0, we can usually expect the largest aftershock to be up to magnitude 5.0."

Three possible scenarios that could occur next

Based on their understanding of tectonics in the area, data currently available from the sequence, historical observations, and statistical models, GeoNet seismologists considered that there are three possible scenarios that could occur over the following weeks:

Scenario One – Very Likely (within the next 30 days)

The most likely scenario is for aftershocks to continue to decrease in frequency, with no future large earthquakes. This is consistent with normal aftershock behaviour. We expect aftershocks over a slightly larger region than where aftershocks have already happened. Again, it is very early in the aftershock sequence and we will know more as this sequence develops.

Scenario Two – Very Unlikely (within the next 30 days)

A very unlikely scenario is that future earthquakes similar to the M6.0 Wilberforce Earthquake (link) may occur within the general region of the main shock. Large earthquakes are not surprising in this area; it is historically a very seismically active place. In fact, it has been affected by a handful of large earthquakes during the last century. These include at least four earthquakes of M6 or greater:

This magnitude 6.2 earthquake with an epicentre near Lake Coleridge was felt over the greater part of the South Island. It was preceded by two foreshocks and followed by numerous aftershocks, the largest of which had a magnitude of 5.8. These persisted until the end of 1949.

Scenario Three – Extremely Unlikely (within the next 30 days)

An extremely unlikely but possible scenario is that the Wilberforce sequence will trigger a larger magnitude quake – a magnitude 7 or greater –on another fault (e.g.  the Alpine Fault). The Alpine Fault is one of the most active crustal faults on Earth. It is already known to have a high probability of rupture over the next 30 years; however it is unlikely that the occurrence of the Wilberforce earthquake has greatly increased this hazard. 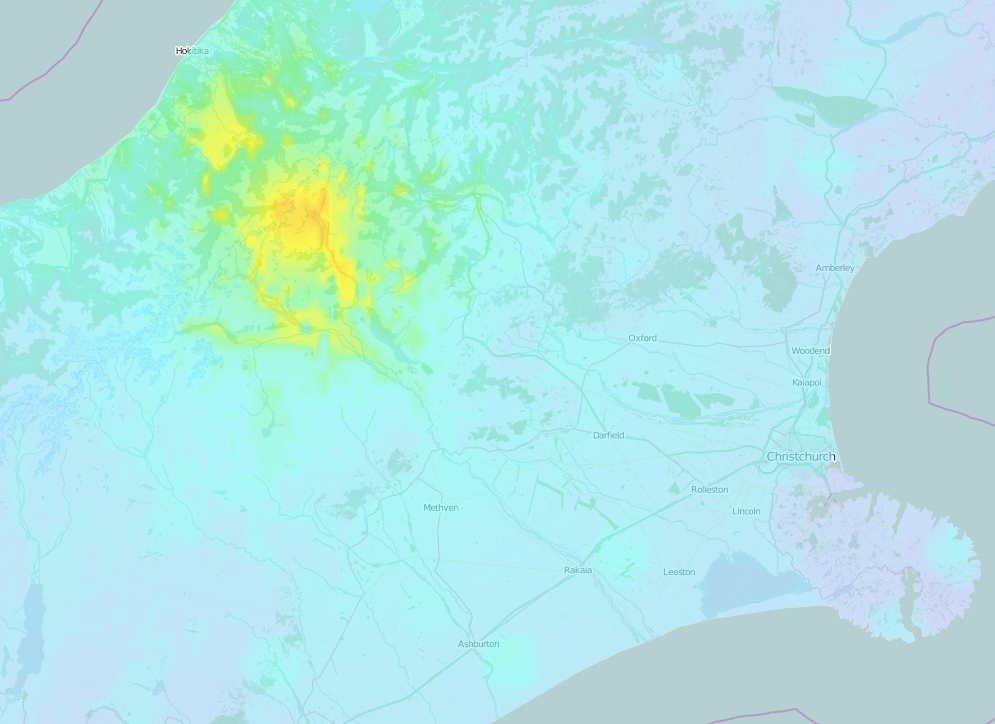 ShakeMap of the earthquake showing shaking intensity at the surface. Homes in the yellow and orange zones may have experienced minor contents damage. Image credit: GeoNet

This part of the country is no stranger to strong earthquakes, GeoNet explains.

In the last 100 years, there have been several similar sized and located earthquakes (see above). The tectonics in the area are dominated by the Alpine Fault, where the Australian and Pacific tectonic plates meet, pushing together to form the mountain ranges of our picturesque Southern Alps. Surrounding the Alpine Fault there are numerous known and unidentified faults which, along with the Alpine Fault, take up stresses from the convergence of the Pacific and Australian plates.

The Earthquake Commission advised that as aftershocks continue, it’s important to fix and fasten any large furniture or valuables in homes to keep families safe. One step is to visit the EQC website and look through information in the Fix. Fasten. Don’t Forget section.

185 people were killed when a devastating M6.3 quake hit Christchurch in 2011.