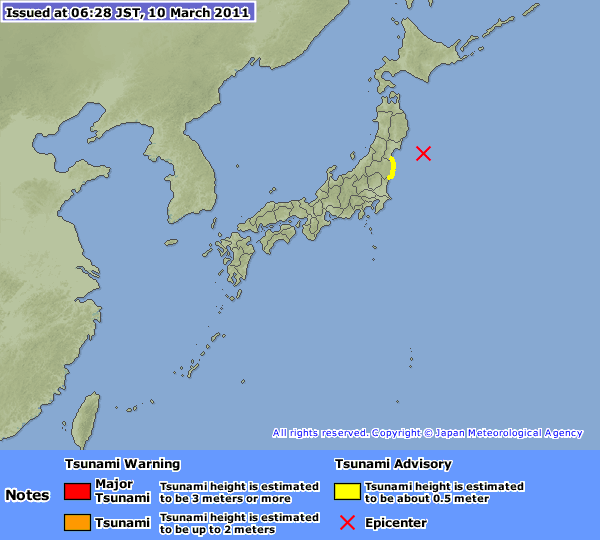 A massive 7.2 magnitude earthquake has struck off the east coast of Honshu, Japan according to the Japan Meteorological Agency prompting a tsunami alert. The quake reportedly occurred at 11:45 a.m. local time on Wednesday according to the U.S. Geological Survey (USGS).

The epicenter of the quake was approximately 256 miles northeast of Tokyo, and according to the USGS, it was located 8.8 miles below the surface. Japan's Meteorological Agency had issued a tsunami advisory for the Pacific Coast of Tohoku, in northeastern Japan, with an expected tsunami height of 0.5 of a meter (just over 1.5 feet). Coastal locations that felt strong tremors can also experience localized tsunamis due to underwater landslides.

In the hours after the quake, tsunami wave heights of this magnitude were observed at several locations in this area. All tsunami advisories have since been canceled for the region. (AccuWeather) 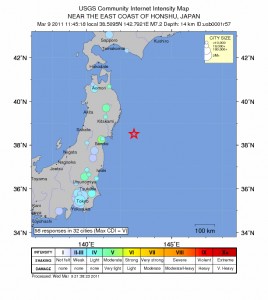 The 03/09/2011 earthquake near the east coast of Honshu, Japan, occurred as a result of thrust faulting on or near the subduction zone interface plate boundary between the Pacific and North American plates. At the latitude of this earthquake, the Pacific plate moves approximately westwards with respect to the North America plate at a velocity of 83 mm/yr. The Pacific plate thrusts underneath the North America plate at the Japan Trench, and dips to the west. The location, depth, and focal mechanism of the March 9 earthquake are consistent with the event having occurred as thrust faulting associated with subduction along this plate boundary.

The Japan Trench subduction zone experiences reasonably frequent large earthquakes, and has hosted 9 events of magnitude 7 or greater since 1973. The largest of these was an M 7.8 earthquake approximately 230 km to the north of the March 9 event, in December 1994, which caused 3 fatalities and almost 700 injuries. In June of 1978, an M 7.7 earthquake 75 km to the southwest caused 22 fatalities and over 400 injuries. In December of 2008, a sequence of 4 strong earthquakes (M 5.3-5.8) occurred within 20 km of the March 9 event. In the first 12 hours following the March 9 earthquake, the region has experienced over a dozen aftershocks of M 5 or greater, the largest being M 5.7. (USGS)