Ghanaians were held spellbound when the halo phenomenon emerged in the skies late Wednesday morning. Hundreds of people stepped out of their offices to take pictures of the celestial wonders. Onlookers believed it was signs of the last days. 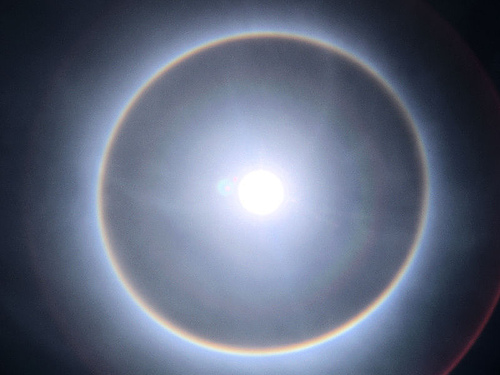 However, meteorologists said the phenomenon known as halo phenomenon is natural around the world. It is already a subject of interest on social networks. A halo also known as a nimbus, icebow or Gloriole is an optical phenomenon produced by ice crystals creating colored or white arcs and spots in the sky. (SoTT)

There are many types of ice halos. They are produced by the ice crystals in cirrus clouds high (5–10 km, or 3–6 miles) in the upper troposphere. The particular shape and orientation of the crystals is responsible for the type of halo observed. Light is reflected and refracted by the ice crystals and may split up into colors because of dispersion. The crystals behave like prisms and mirrors, refracting and reflecting sunlight between their faces, sending shafts of light in particular directions. Atmospheric phenomena such as halos were used as part of weather lore as an empirical means of weather forecasting before meteorology was developed. Other common optical phenomena involving water droplets rather than ice crystals include the glory and the rainbow.