Citizen scientists have discovered that the aurora-like phenomenon called STEVE or Strong Thermal Emission Velocity Enhancement has a new feature– small, green fence-like lights streaking through the atmosphere at 1 600 km/h (1 000 mph). STEVE is also a discovery that's still new to scientists, and the newly-found feature brings researchers a step closer to solving its mystery.

"Often in physics, we build our understanding then test the extreme cases or test the cases in a different environment," said Elizabeth MacDonald, a space scientist at NASA’s Goddard Space Flight Center in Greenbelt, Maryland.

"STEVE is different than the usual aurora, but it is made of light and it is driven by the auroral system. In finding these tiny little streaks, we may be learning something fundamentally new in how green auroral light can be produced."

In a new study published on AGU Advances, researchers shared their findings about STEVE's new features. The streaks could be moving points of light or a line, and determining this will provide a clue to help them know what causes the phenomenon.

"I’m not entirely sure about anything with respect to this phenomenon just yet," said lead author Joshua Semeter, a professor at Boston University.

"You have other sequences where it looks like there is a tube-shaped structure that persists from image to image and doesn’t seem to conform to a moving point source, so we’re not really sure about that yet."

Scientists are still working to label STEVE. They usually classifiy optical features in the sky in two categories: airglow and aurora. When airglow occurs, atoms in the atmosphere recombine and emit stored energy in the form of light, generating bright colors. An aurora, on the other hand, is caused by electron bombardment.

"STEVE in general appears to not conform well to either one of those categories," Semeter added. "The emissions are coming from mechanisms that we don’t fully understand just yet."

STEVE's purple lights are most probably a result of ions moving at a supersnoic speed. The green streaks are also moving slower than the structures in the purple emissions, and scientists assume they could be caused by turbulence in the spce particles at these altitudes. 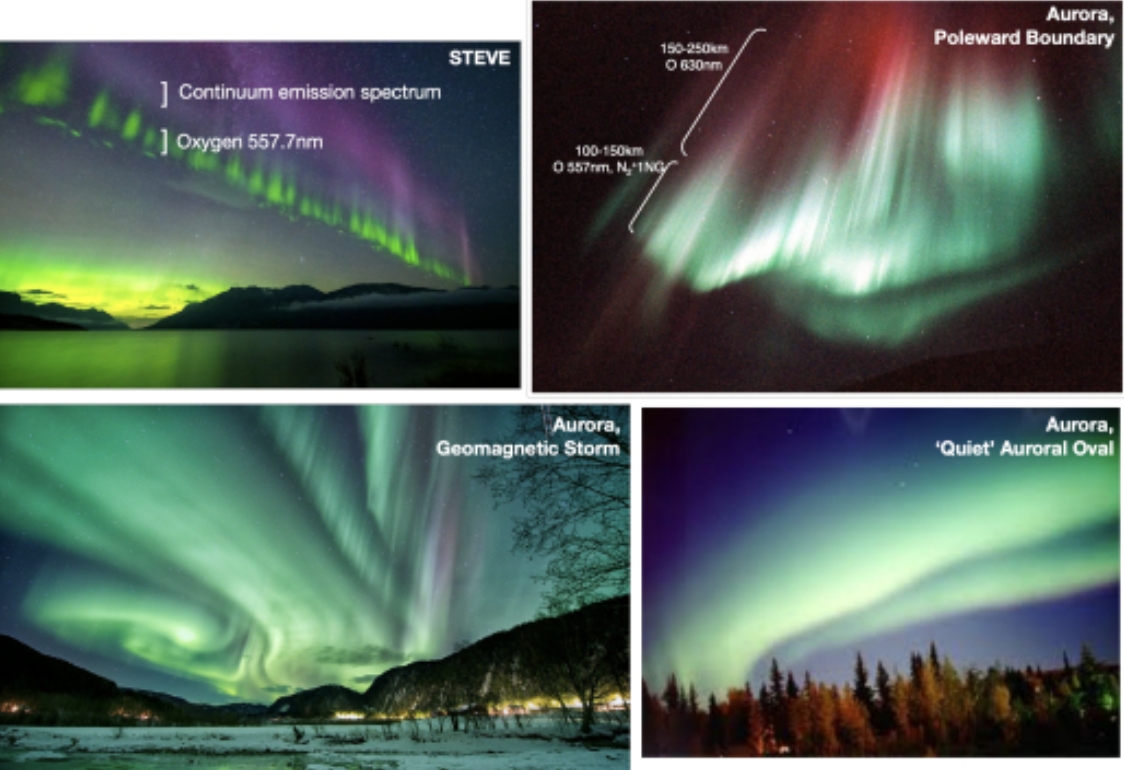 "We know this kind of turbulence occurs. There are people who base their entire careers on studying turbulence in the ionospheric plasma formed by very rapid flows," said Semeter. "The evidence generally comes from radar measurements. We don’t ever have an optical signature."

"This paper is the tip of the iceberg in this new area of these tiny little pieces of the picket fence. Something we do in physics is try to chip away to increase our understanding," MacDonald explained.

"This paper establishes the altitude range and some of the techniques we can use to identify these features, then they can be better resolved in other observations."

Strong thermal emission velocity enhancement (STEVE) is an optical phenomenon of the subauroral ionosphere arising from extreme ion drift speeds. STEVE consists of two distinct components in true‐color imagery: a mauve or whitish arc extended in the magnetic east–west direction and a region of green emission adjacent to the arc, often structured into quasiperiodic columns aligned with the geomagnetic field (the “picket fence”). This work employs high‐resolution imagery by citizen scientists in a critical examination of fine‐scale features within the green emission region. Of particular interest are narrow “streaks” of emission forming underneath field‐aligned picket fence elements in the 100‐ to 110‐km altitude range. The streaks propagate in curved trajectories with dominant direction toward STEVE from the poleward side. The elongation is along the direction of motion, suggesting a drifting point‐like excitation source, with the apparent elongation due to a combination of motion blur and radiative lifetime effects. The cross‐sectional dimension is <1 km, and the cases observed have a duration of ∼20–30 s. The uniform coloration of all STEVE green features in these events suggests a common optical spectrum dominated by the oxygen 557.7‐nm emission line. The source is most likely direct excitation of ambient oxygen by superthermal electrons generated by ionospheric turbulence induced by the extreme electric fields driving STEVE. Some conjectures about causal connections with overlying field‐aligned structures are presented, based on coupling of thermal and gradient‐drift instabilities, with analogues to similar dynamics observed from chemical release and ionospheric heating experiments.