Typhoon "Rai" — known locally as Odette — reached Super Typhoon intensity on December 16, 2021, just before it made landfall on the popular tourist island of Siargao, Philippines with maximum sustained winds around 195 km/h (120 mph).1 Rai is the 6th super typhoon of the year and one of the most powerful typhoons to ever hit the southern Philippines.

The damage to infrastructure caused by the typhoon in areas in the Visayas and Mindanao has been initially placed at more than 3.5 million USD (178 million PHP), the Department of Public Works and Highways (DPWH) reported on Friday, December 17.

"These are only the roads and bridges, not included the buildings and private structures,” DPWH Undersecretary Emerson Benitez said in a press briefing.2

4 road sections have limited access – 1 in Northern Mindanao and 3 in Caraga – due to flooding and fallen trees. All other national roads and bridges in other affected regions are passable to all types of vehicles.

The National Disaster Risk Reduction and Management Council (NDRRMC) said 83 026 families or 332 855 persons have been preemptively evacuated in Regions 6, 7, 8, 9, and Caraga as of Friday.

Power restoration is ongoing in 62 cities and municipalities.3

Homes and infrastructure have been devastated across islands in the eastern Philippines, including Mindanao, Siargao and Nonoc, severely affecting more than 140 000 people.4 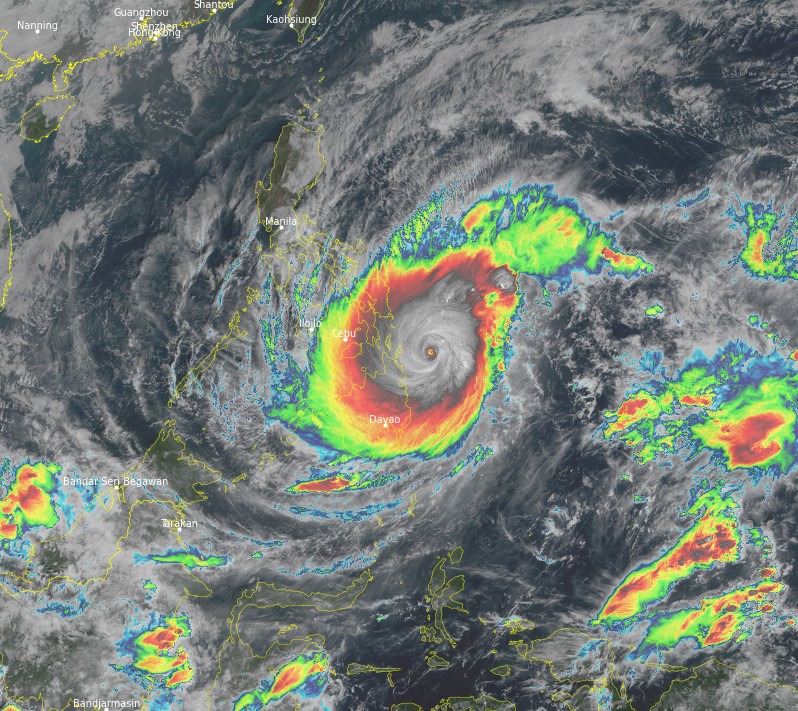 "This is one of the most powerful typhoons to ever hit the southern Philippines," Philippine Red Cross Chairman Richard Gordon said.

"It has torn houses to pieces, it's dumping torrential rain, and severely flooding cities and towns. Top priority is preventing loss of life, rescuing people from floodwaters, providing medical care and first aid, hot meals, and drinking water to people who don’t know whether they still have a home left standing."

"We are ramping up relief efforts and standing by our Filipino people. This typhoon is a terrible surprise for the festive season."

Minimum central barometric pressure was 955 hPa and the system was moving west at 24 km/h (15 mph).

Signal No. 3 is up in the northern portion of Palawan (El Nido, Taytay, Araceli, Dumaran, Roxas, San Vicente, Puerto Princesa City), including Cagayancillo and Cuyo Islands as of posting time.5

While over the West Philippine sea, Rai is forecast to move west-northwestward and may exit the Philippine Area of Responsibility tomorrow morning or early afternoon (LT).

The typhoon is forecast to pass in the vicinity of the Kalayaan Islands tomorrow.

Re-intensification is likely as it moves over the West Philippine Sea. However, continuous weakening may ensue beginning Sunday as the typhoon becomes exposed to increasing vertical wind shear and the surge of the Northeast Monsoon. 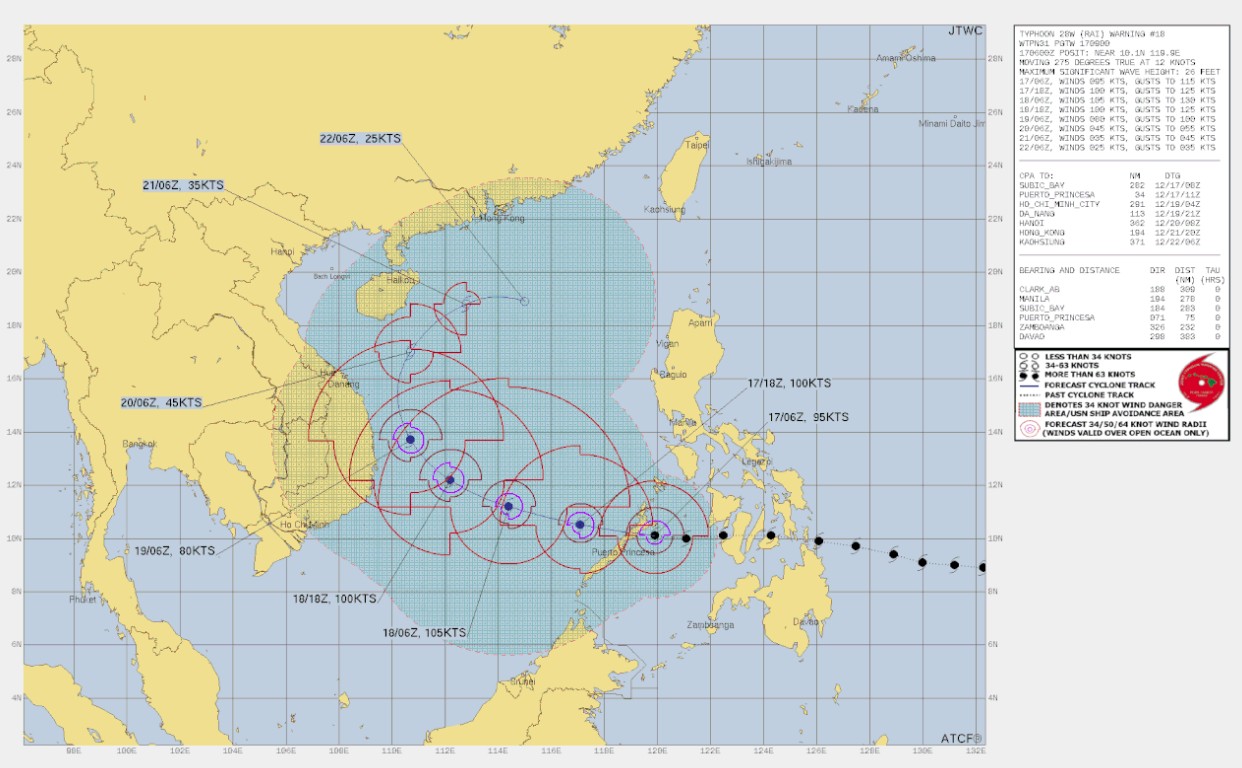 On Sunday, December 19, government officials said 89 people lost their lives. However, the death toll is still expected to rise.

The death toll rose to 208 on Monday. 52 people remain missing and 239 were injured.

Many died due to falling trees and collapsing walls, flash floods, and landslides.

By Tuesday, December 21, the death toll rose to 375 and the number of missing to 56, according to the national police. Sadly, the death toll may still increase because several towns and villages remain out of reach.