Typhoon "Rai" (Odette) rapidly intensified on December 16, 2021, becoming a Category 5 Super Typhoon before making landfall over the Philippines. Rai is the 22nd named storm of the 2021 Pacific typhoon season and the 9th typhoon.

"Pretty scary stuff to be quite honest with you," meteorologist Robert Speta said ahead of the landfall.

"I don't try to hype these storms up but just over the few hours here we saw this explosive intensification. That's what we often call the Philippine Sea Effect. This isn't the first time we've seen something like this just prior to landfall and my biggest worry is that we still got Signal Force 3 in place across coastal areas. Hopefully, PAGASA does push that up to Singal Force 4 just because of that still expected intensification just prior to landfall." 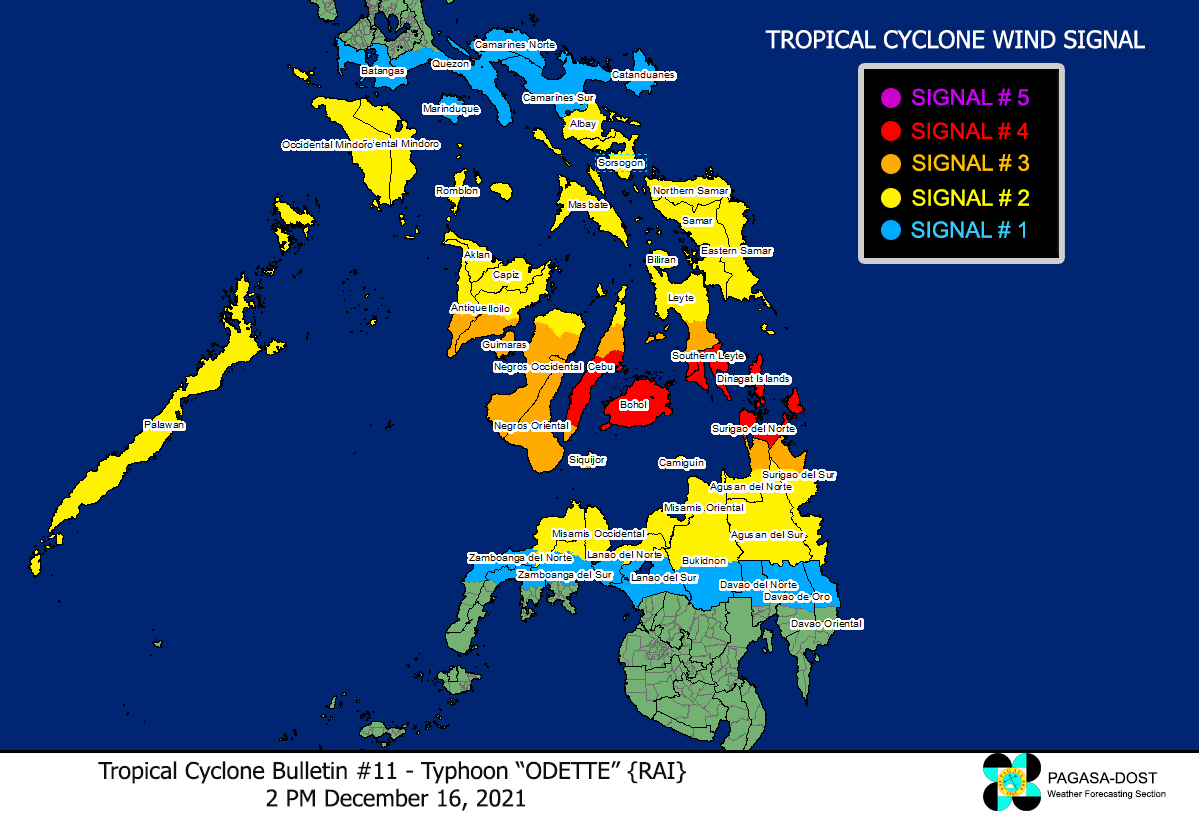 The minimum central barometric pressure was 915 hPa and the system was moving west at 26 km/h (16 mph). 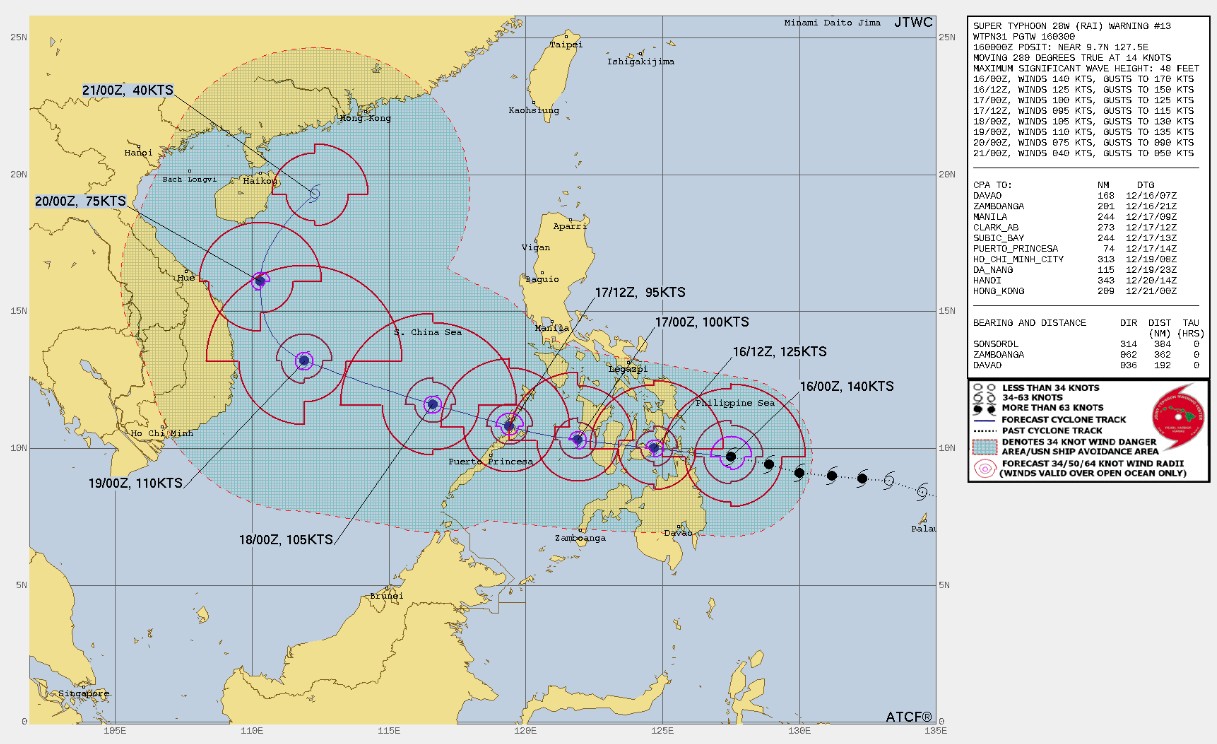 91 flights between Manila and various domestic routes were canceled as of 01:20 UTC (09:20 LT), the Manila International Airport Authority (MIAA) reported.

At least 82 080 residents in Eastern Visayas have heeded the call for early evacuation ahead of landfall, the Philippine National Police (PNP) reported.

According to PAGASA, Rai has made landfall over Siargao Island, Surigao del Norte at 05:30 UTC on December 16.1

On the forecast track, Rai will continue moving west-northwestward or westward and may make another landfall over Dinagat Islands this afternoon (LT).

Afterwards, its center will move westward and cross several provinces in Central and Western Visayas regions before emerging over the Sulu Sea tomorrow morning.

After passing near or in the vicinity of either Cuyo or Cagayancillo archipelago, Rai is forecast to cross the northern or central portion of Palawan tomorrow afternoon or evening before emerging over the West Philippine Sea.

The typhoon may see some slight weakening as it crosses northeastern Mindanao, Visayas, and Palawan, but it is forecast to remain as a typhoon.

Re-intensification is likely once Rai emerges over the West Philippine Sea. However, weakening may ensue beginning Saturday evening or Sunday, December 19 as the typhoon becomes exposed to increasing vertical wind shear and the surge of the Northeast Monsoon. 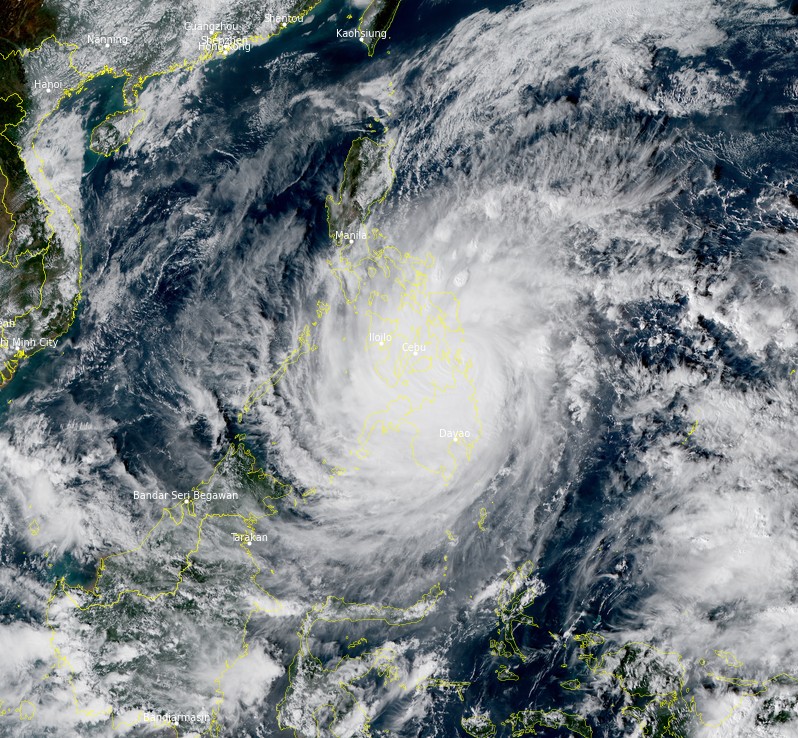 Under these conditions, scattered to widespread flooding (including flash floods) and rain-induced landslides are expected especially in areas that are highly or very highly susceptible to these hazard as identified in hazard maps, and in localities with significant antecedent rainfall.

Winds may reach typhoon strength up to 195 km/h in strength within any of the areas where TCWS #4 is hoisted during the passage of the typhoon. This may cause generally heavy to very heavy damage to structures and vegetation.

Destructive typhoon-force winds will be experienced within any of the areas where TCWS #3 is in effect. This may bring moderate to heavy damage to structures and vegetation.

Damaging winds reaching gale- to storm-force strength will be experienced within any of the areas where TCWS #2 is in effect. This may result in generally light to moderate damage to structures and vegetation.

Strong winds (strong breeze to near gale) with higher gusts will be experienced within any of the areas where TCWS #1 is currently in effect during the passage of the typhoon. This may generally bring up to very light damage to structures and vegetation.

There is a moderate to high risk of storm surge of up to 3 m (10 feet) in height which may cause life-threatening flooding in the low-lying coastal areas of Central Visayas, Northern Mindanao, Iloilo, Guimaras, Negros Occidental, Eastern Samar, Southern Leyte, Dinagat Islands, Surigao del Norte, Surigao del Sur, Agusan del Norte, and several localities in the northern portion of Palawan including Calamian, Cuyo and Cagayancillo Islands, Antique, the southern portion of Samar, Leyte, and Davao Oriental.

In the next 24 hours, moderate to very high seas (1.2 to 10 m / 4 to 33 feet) will be experienced over the seaboards of areas where TCWS is in effect (especially in the open sea areas). These conditions are risky for all types of sea vessels. Mariners are advised to remain in port or take shelter in port until winds and waves subside.

Under the influence of Typhoon “ODETTE” and the prevailing Northeast Monsoon, a Gale Warning remains in effect for several coastal waters not under any wind signal, specifically the seaboards of Northern Luzon, and the eastern seaboards of Central and Southern Luzon.

In the next 24 hours, moderate to rough seas (1.2 to 3.1 m / 4 to 10 feet) will also prevail over the remaining seaboards of the country that are not under any wind signal.

These conditions are risky for those using small seacrafts. Mariners are advised to take precautionary measures when venturing out to sea and, if possible, avoid navigating in these conditions.