A severe dust storm that started in southern Kazakhstan hit parts of Uzbekistan on the evening of November 4, 2021, growing under favorable weather conditions into the worst since the country started keeping meteorological records in 1871. The worst affected were Tashkent and the southern Syrdarya Region, and Kazakhstan’s Turkestan Region.

According to the country's meteorological service – Uzhydromet, under the influence of gusts of wind, the parched upper layer of soil rose up, creating the effect of a dust and sand haze, with visibility just 100 – 200 m (328 – 656 feet) in a number of districts in the country.1

Volumes of sand and dust that are raised into the air usually disperse and settle on the ground soon after the wind drops but in this case, a mass of cold air prevented this from happening.

Instead, an inversion layer formed, in which temperatures stop falling with elevation but rise instead.

This created a dust haze, a phenomenon unusual for the region.

This sand and dust storm was the first of its kind since Uzbekistan started keeping meteorological records 150 years ago, Uzhydromet said.2, 3

By 21:00 LT on November 4, the concentration of dust in Tashkent’s air was 30 times the permitted level and 10 times over during the afternoon hours of November 5.

Residents across the country made more than 4 000 calls seeking help for respiratory problems. 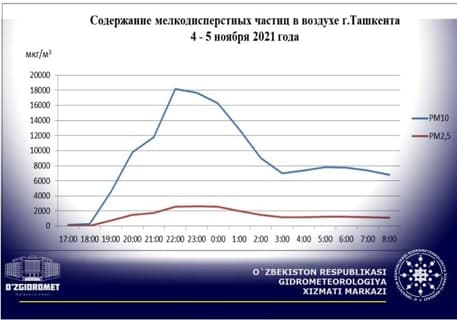