Tropical Storm "Henri" made landfall near Westerly, Rhode Island, U.S. at approximately 16:15 UTC (12:15 EDT) on Sunday, August 22, 2021. At the time of landfall, it had maximum sustained winds of 95 km/h (60 mph) and a minimum central pressure of 989 hPa. Henri slowed down after landfall, weakened into a tropical depression and continued dumping heavy rainfall into Monday, August 23.

More than 140 000 customers lost power at the height of the storm, while heavy rainfall swamped roads and closed bridges.

Most of the rain produced by Henri focused on the western side of the system, 'dousing New Jersey, Pennsylvania, and New York while leaving some areas east of landfall, such as Massachusetts's areas of Cape Cod, Martha's Vineyard and Nantucket.'2

Henri produced 80 to 150 mm (3 to 6 inches) of rainfall over many areas on Sunday, August 22, with parts of central New Jersey receiving as much as 200 mm (8 inches) of rain by midday Sunday. In Jamesburg, television video footage showed flooded downtown streets and cars almost completely submerged. In Newark, Public Safety Director Brian O’Hara said police and firefighters rescued 86 people in 11 incidents related to the storm.3

New England officials fretted that just a few more inches of precipitation would be a backbreaker following a summer of record rainfall, AP reported.

"The ground is so saturated that it can flood with just another inch of rain," Connecticut Gov. Ned Lamont warned late Sunday.3

Heavy rainfall is expected to continue across portions of southern New England and the northern Mid-Atlantic states through the rest of the day.

A Flash Flood Watch is in effect for portions of central New York and northeastern Pennsylvania.

Flood Watches remain in effect for portions of New England, including parts of Massachusetts, New Hampshire, Vermont, and the entirety of Connecticut and Rhode Island.

Flood Watches are also in effect for portions of New Jersey, New York (including Long Island), and Pennsylvania.

Coastal Flood Advisories remain in effect for portions of the southeastern Massachusetts and New Jersey coastlines. 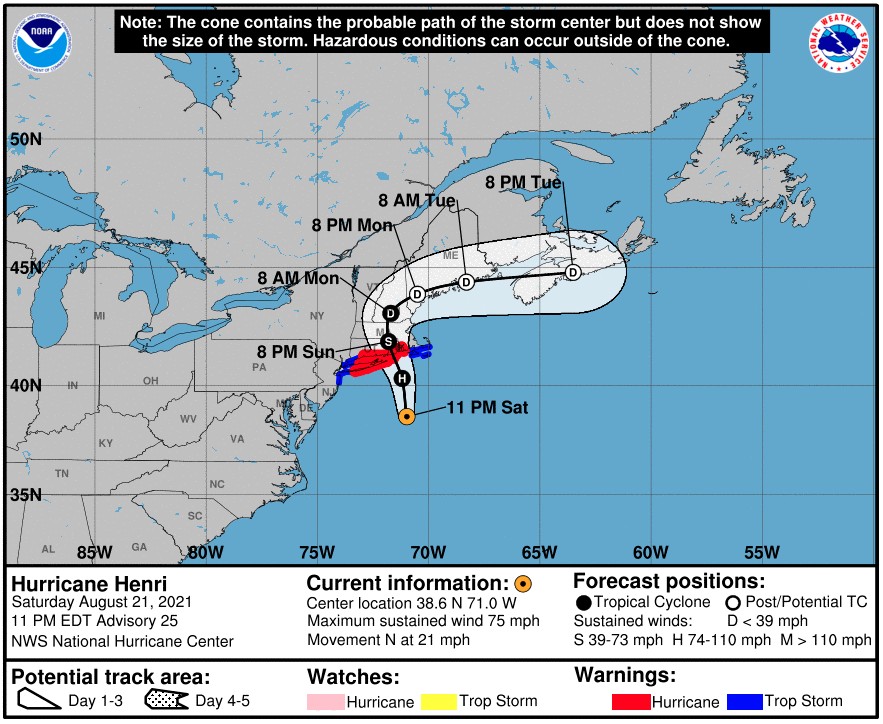 "Henri is expected to continue weakening today, while very slowly drifting back toward the east over southern New England," NWS forecaster Snell noted at 07:38 UTC on August 23.5

"The main hazard associated with Henri today will be the threat of flash, urban, and river flooding.

"Additional rainfall amounts of 25 – 75 mm (1 to 3 inches) may fall over regions that have already seen several inches of rain in the last 24 hours, leading to added flooding concerns.

"WPC has issued a Moderate Risk (level 3/4) of excessive rainfall between southeast New York and Rhode Island, including Long Island. Flash Flood Watches are also in effect. Henri and all associated hazards are expected to exit the region on Tuesday."

A look back on Hurricane Henri's time in the Atlantic Ocean and its trek to the Northeast U.S. pic.twitter.com/sDCMogUYCR