Low-level ash emissions from the summit of Veniaminof volcano, Alaska were observed in web camera views on April 5, 2021, the Alaska Volcano Observatory (AVO) reported at 20:49 UTC. Because of the renewed activity, AVO has raised the Aviation Color Code to ORANGE and the Volcano Alert Level to WATCH.

While some instances of elevated seismicity were noted there were no infrasound detections of explosions or surface activity.

Eruptive activity at Veniaminof usually consists of minor ash emissions, lava fountaining and lava flows from the small cone in the summit caldera.

The partial restoration of local seismic data will help the Alaska Volcano Observatory to detect changes in unrest that may lead to a more significant explosive eruption. 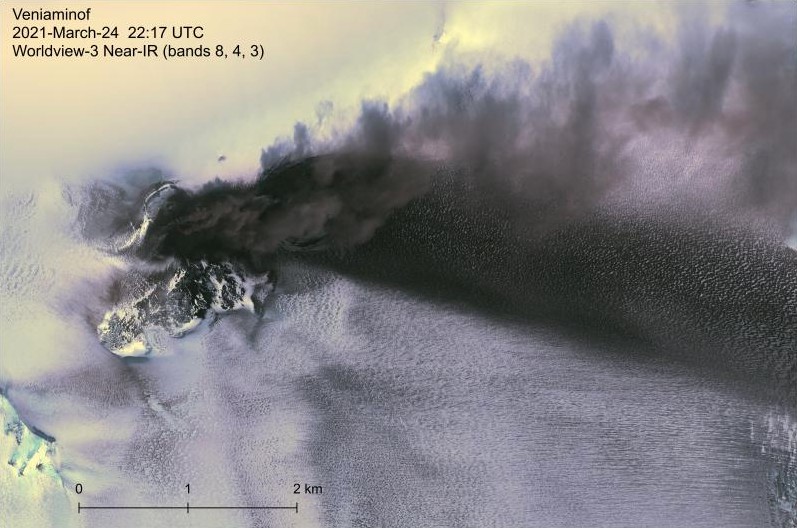 Worldview-3 near-IR satellite image of the Veniaminof eruption on March 24, 2021. Tephra deposits and an active ash plume are visible to the east of the summit cone. The 2018 lava flow field is visible south of the cone, while the 2021 lava flow ice cauldron is mostly obscured by the plume. Image credit: Matt Loewen/USGS, DigitalGlobe via NextView license

Historical eruptions probably all originated from the westernmost and most prominent of two intra-caldera cones, which rises about 300 m (984 feet) above the surrounding icefield.

The other cone is larger, and has a summit crater or caldera that may reach 2.5 km (1.5 miles) in diameter, but is more subdued and barely rises above the glacier surface.