A powerful low pressure system and cold front will sweep through the Eastern U.S. on Sunday, November 15, 2020. As a result, widespread high wind warnings and wind advisories are in effect across the Midwest, Great Lakes, and Ohio Valley.

A surface low pressure system is forecast to move northeastward across the Upper Great Lakes today and tonight, sweeping a cold front quickly across the Ohio and Tennessee Valleys toward the Eastern Seaboard, NWS forecaster Tate noted at 07:57 UTC (02:57 EST) on November 15.

A quick round of rain and thunderstorms is possible along and ahead of the front, and a few storms could be strong to severe across portions of the Mid-Atlantic region, where the Storm Prediction Center has outlooked a Marginal Risk.

Some precipitation should be in the form of snow across the Great Lakes region to the interior Northeast, and light to moderate lake enhanced snow could linger there through Tuesday.

In addition to the precipitation, gusty winds are expected.

Wind Advisories are widespread across much of the eastern half of the U.S., with some High Wind Warnings embedded especially downwind of the Great Lakes.

Temperatures ahead of the front should be 3 to 6 °C (5 to 10 °F) above normal today in much of the East, cooling to a few degrees below normal Monday behind the front. 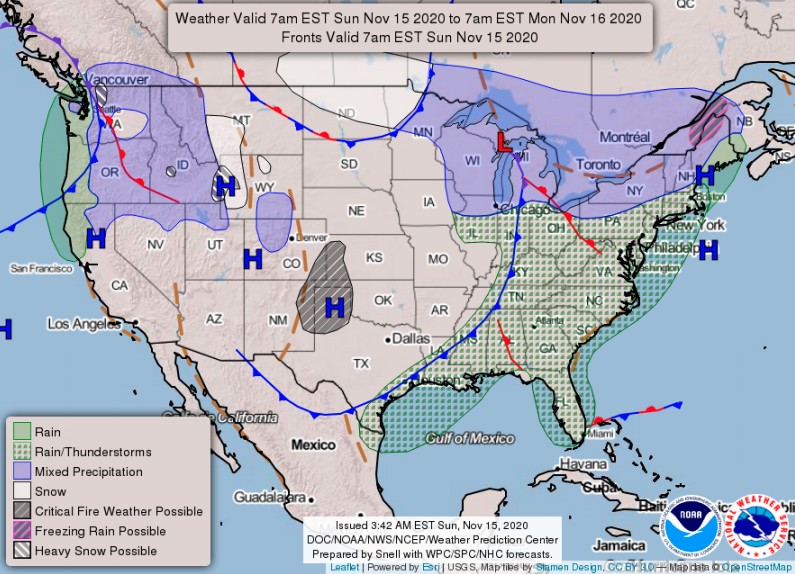 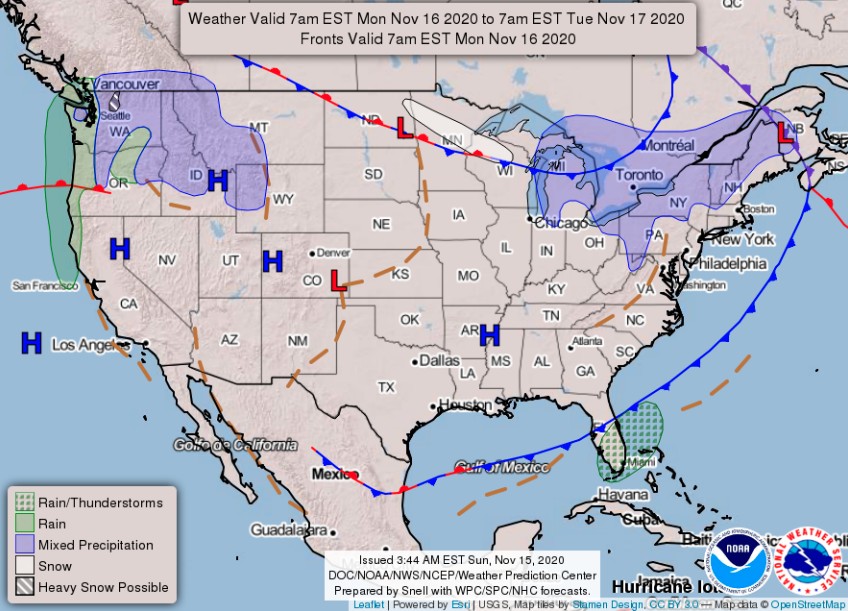 In the Northwest, a frontal system is forecast to slowly move into the region before dissipating tonight.

Additional precipitation is possible, with snow in the Cascades, Northern Rockies, and Wind River Mountains/Tetons. Winter Weather Advisories remain in effect for those areas.

Rain totals in lower elevations will likely be highest in far northwestern California and far southwestern Oregon today, and Flood Watches are in effect there.

Then Monday into Tuesday, precipitation should mainly focus in Washington as the moisture plume moves northward ahead of another front approaching from the Pacific.

A building upper-level ridge in the West should lead to warmer than normal temperatures across California, the Southwest, and the Great Basin on Monday. Meanwhile, dry weather will continue in the central CONUS.

Gusty winds could be a threat in the Central High Plains in particular, where High Wind Warnings remain in effect.

Elevated fire weather conditions may also continue in central and southern portions of the High Plains today, as well as parts of southern California.