Extremely-dangerous Hurricane "Dorian" dumped over 609 mm (24 inches) of rain over parts of Grand Bahama and Abaco Islands and claimed lives of at least 5 people. The current forecast track takes its core north of Grand Bahama Island through this evening (EDT). The hurricane will then move dangerously close to the Florida east coast late today through Wednesday evening, very near the Georgia and South Carolina coasts Wednesday night and Thursday, and near the North Carolina coast late Thursday and Thursday night.

In the early hours of Tuesday, September 3, Hurricane Dorian had been stationary over the island of Grand Bahama for 18 hours, most of the time as a Category 5 hurricane, NASA's Goddard Space Center reports.

Early Tuesday morning, Dorian's central pressure had risen and its wind intensity had dropped to Category 4 on the Saffir-Simpson scale. In addition, Dorian had experienced an eyewall replacement cycle on September 2, so by Tuesday morning September 3, the geographic extent of its tropical-storm-force winds had expanded.

These rain estimates come from the NASA IMERG algorithm, which combines observations from a fleet of satellites, in near-realtime, to provide global estimates of precipitation every 30 minutes. The storm-total rainfall at a particular location varies with the forward speed of the hurricane, with the size of the hurricane's wind field, and with how vigorous the updrafts are inside of the hurricane's eyewall. 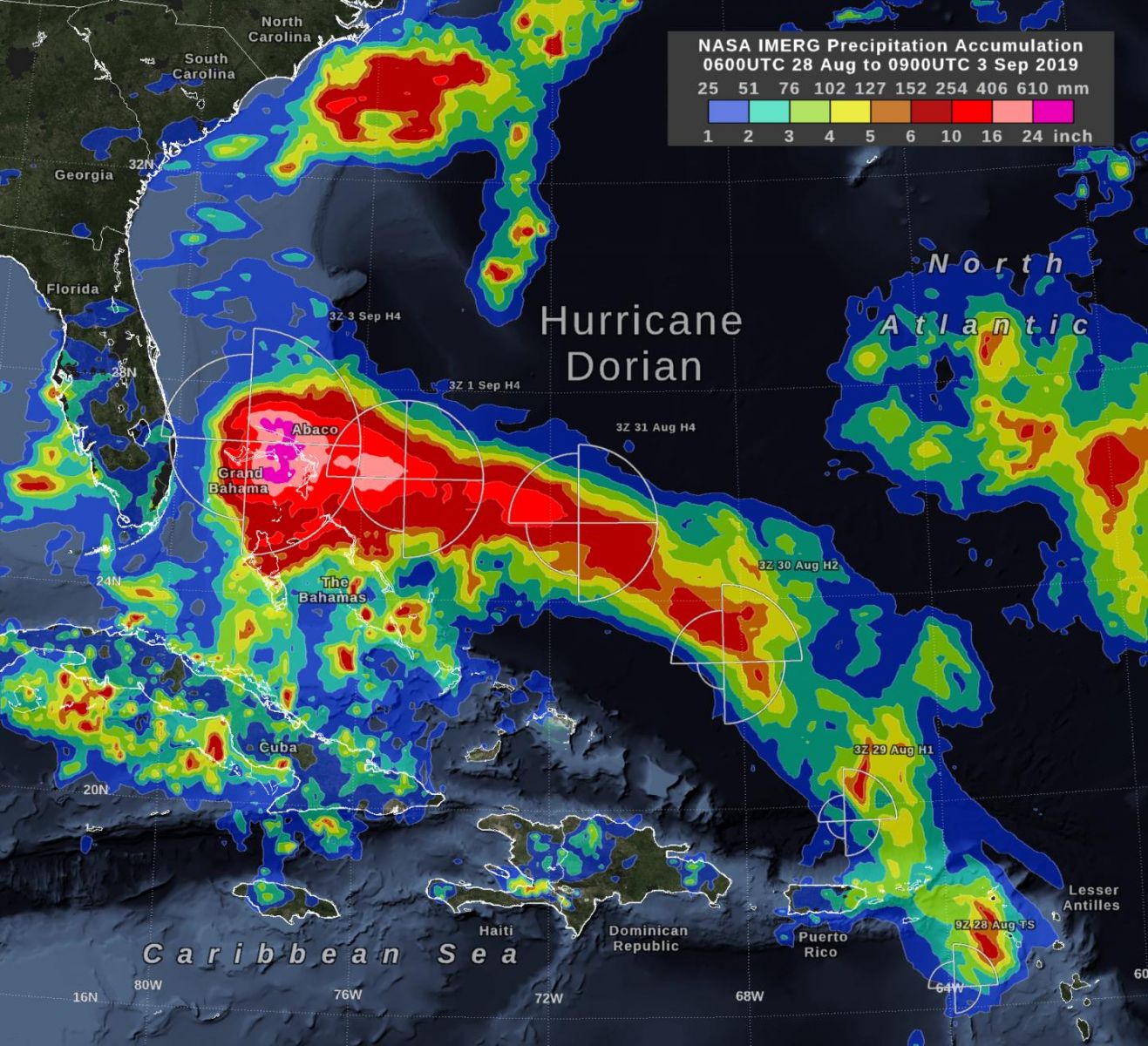 NASA's IMERG storm-total rain accumulation over parts of Grand Bahama and Abaco islands have exceeded 609 mm (24 inches) according to NASA satellite-based estimates. The graphic also shows the distance that tropical-storm-force winds extend from Hurricane Dorian's low-pressure center, as reported by the National Hurricane Center. The symbols H and TS represent a hurricane of various Saffir-Simpson categories or a tropical storm, respectively. Credit: NASA/Goddard 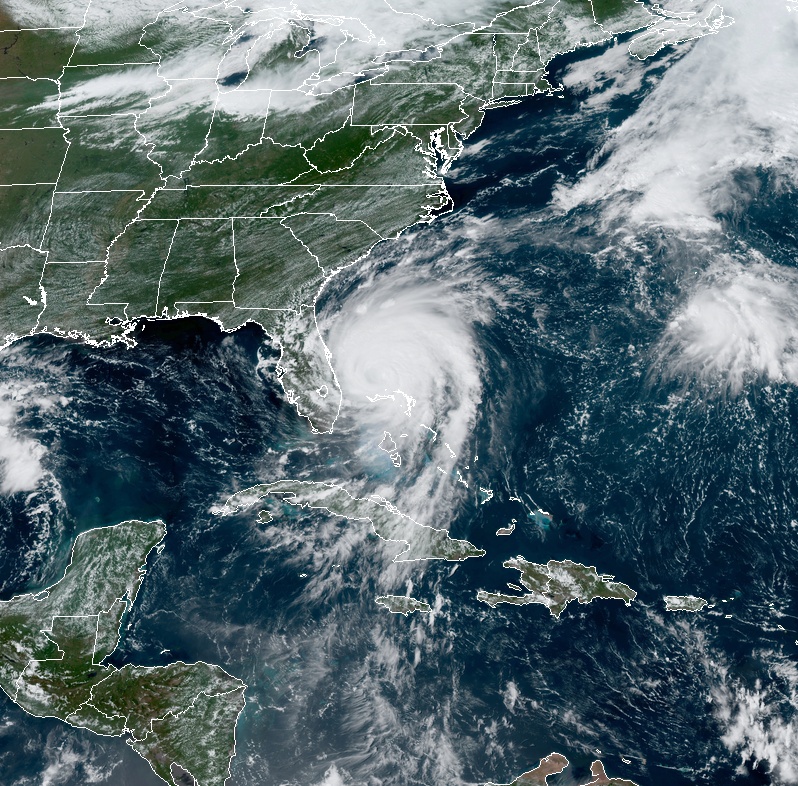 On this track, the core of extremely dangerous Hurricane "Dorian" will gradually move north of Grand Bahama Island through this evening. The hurricane will then move dangerously close to the Florida east coast late today through Wednesday evening, very near the Georgia and South Carolina coasts Wednesday night and Thursday, and near the North Carolina coast late Thursday and Thursday night.

It will remain a powerful hurricane during the next couple of days. 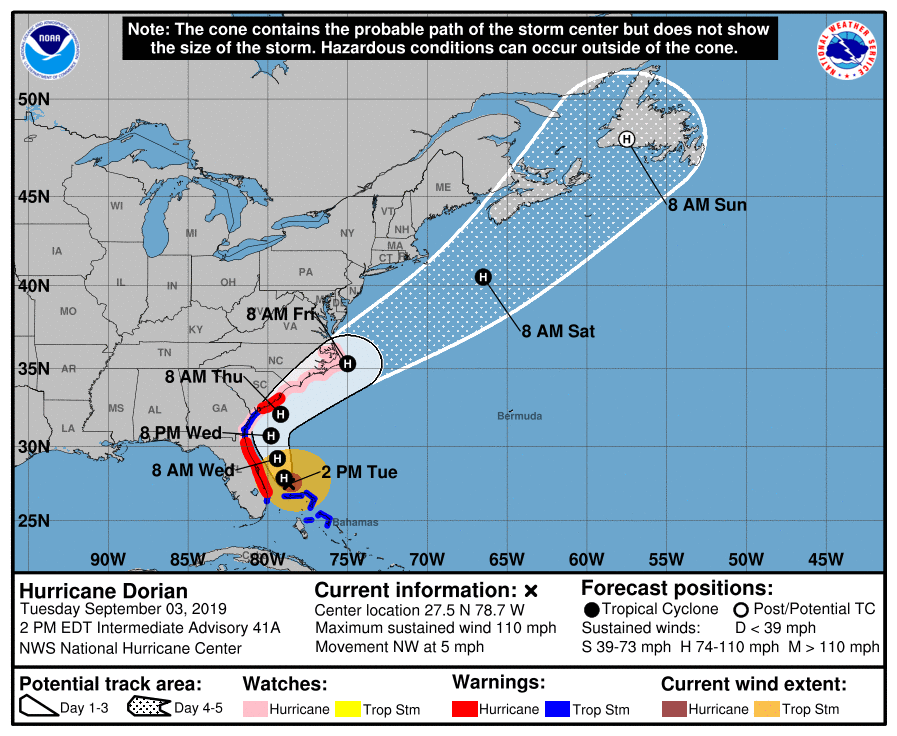 A Storm Surge Warning is in effect for Jupiter Inlet, FL to South Santee River, SC

A Storm Surge Watch is in effect for North of South Santee River, SC to Cape Lookout, NC

A Hurricane Watch is in effect for North of Ponte Vedra Beach, FL to Edisto Beach, SC; North of South Santee River, SC to Duck, NC; Albemarle and Pamlico Sounds

A Tropical Storm Warning is in effect for Grand Bahama and the Abacos Islands in the northwestern Bahamas; North of Deerfield Beach, FL to Jupiter Inlet, FL; North of Ponte Vedra Beach, FL to Edisto Beach, SC. 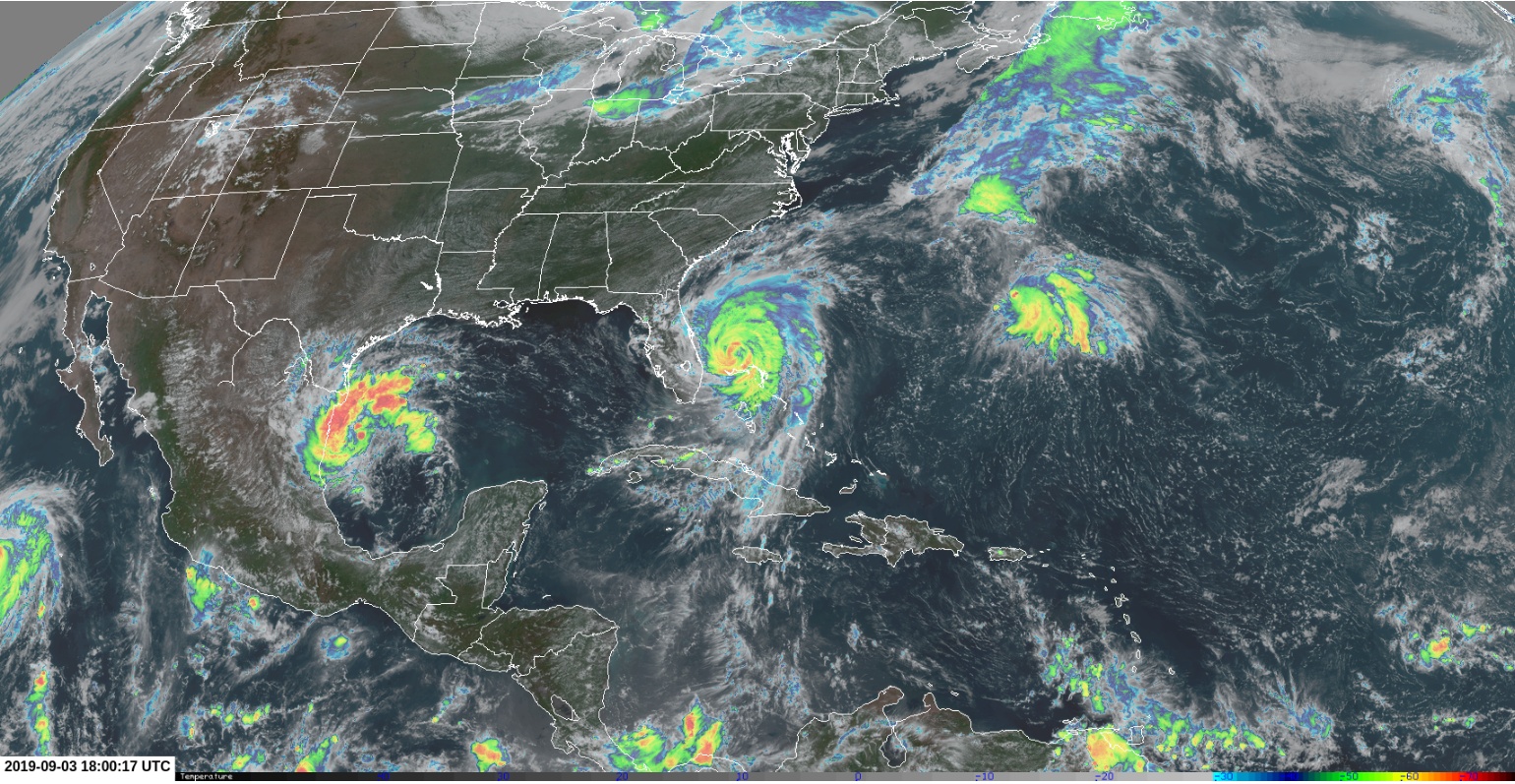 Cameras outside the International Space Station captured views at 14:37 UTC, September 3 of Hurricane "Dorian" from 420 km (260 miles) in altitude as it began to move from an almost stationary position over the northwestern Bahamas.