A high-level eruption took place at Ulawun volcano, Papua New Guinea on June 26, 2019. The eruption started at about 22:00 UTC on June 25 after a few weeks of increased activity. Nearby villages were evacuated.

The RVO reported increased seismicity at the volcano and continuous steam/SO2 emission over the past 24 hours, the Darwin VAAC said in VA Advisory issued 23:47 UTC, June 25. At the time, the eruption was still not observable on satellite imagery.

A high-level eruption was first reported at 01:55 UTC with volcanic ash rising up to 12.8 km (42 000 feet) above sea level and moving SW. The Aviation Color Code was raised to Red.

"Much of the ash was being blown out to sea, but villages near the volcano had been evacuated, Steve Saunders, a volcanologist at the nearby Rabaul Volcano Observatory, said.

"The volcano had been showing signs of increased activity for a few weeks before the eruption started in earnest at about 8 o'clock this morning," Saunders said.

Emissions from Mt Ulawun in West New Britain Province this morning and latest at the moment. This is very dangerous for the nearby communities in Ulamona & Bialla town as well. Mt Ulawun is one the dangerous volcanoes in #PNG & also in the pacific region. #sleepinggiant pic.twitter.com/unQelqL91T 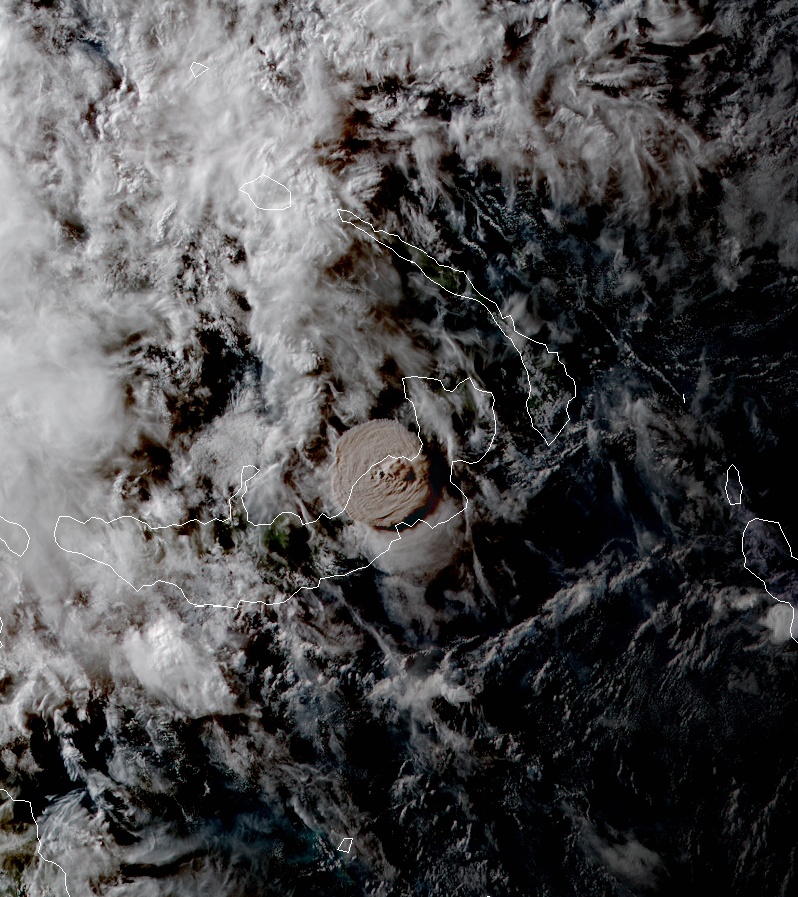 "VA to 19.2 km (63 000 feet) a.s.l. which is stratospheric has become detached from the volcano and is moving eastwards," the center reported 11:30 UTC. "Volcanic ash to 16.7 km (55 000 feet) a.s.l. is extending rapidly outwards and bulging more in a southerly direction. The eruption appears to have ceased, with strong hotspot remaining."

Close up shot of Mt Ulawun eruption today, with red lava blasting out. People living their villages near the volcano and moving out. Picture taken by Sophie Gett. #Ulawun #Ulamona #WestNewBritain #PNG pic.twitter.com/PNd8XnGcQE

Satellite imagery shows a large circular cloud over the volcano, indicating that this is most likely a full-scale subplinian eruption, the world's first since Calbuco, Chile in 2015, VolcanoDiscovery noted.

The symmetrical basaltic-to-andesitic Ulawun stratovolcano is the highest volcano of the Bismarck arc, and one of Papua New Guinea's most frequently active.

Ulawun volcano, also known as the Father, rises above the north coast of the island of New Britain across a low saddle NE of Bamus volcano, the South Son.

A prominent E-W-trending escarpment on the south may be the result of large-scale slumping. Satellitic cones occupy the NW and eastern flanks. A steep-walled valley cuts the NW side of Ulawun volcano, and a flank lava-flow complex lies to the south of this valley.

Historical eruptions date back to the beginning of the 18th century. Twentieth-century eruptions were mildly explosive until 1967, but after 1970 several larger eruptions produced lava flows and basaltic pyroclastic flows, greatly modifying the summit crater.