The defiant Leslie is still a hurricane and is heading directly toward landfall in central Portugal on October 13, 2018. Dangerous winds, surf, and heavy rainfall will affect portions of Portugal and Spain later today and Sunday.

Leslie is defying historical trends as it eyes Portugal and Spain. Not only is this a rare trajectory, if Leslie makes landfall in Portugal, it would be the first tropical system on record ever to do so, and only the second on record for the Iberian Peninsula, TWN meteorologists said. "Residents of Portugal are likely to see one of the stronger storms in recent memory crash into the coast on Saturday (early Sunday local time). Life-threatening rough surf, hurricane-force winds, and up to 125 mm (4.9 inches) of rain are expected for parts of Portugal and Spain. Flash flooding is another one of the concerns highlighted by the Portuguese and Spanish weather agencies."

Portugal's weather service issued red warnings, its highest level, for high winds or dangerous coastal conditions for 13 of its 18 mainland districts, including Lisbon, where it said the storm's effects will start to be felt around 18:00 LT.

The passage of Leslie will be marked by strong wind and precipitation, which is why it is absolutely necessary that residents follow all directions made by the Portuguese National Authority of Civil Protection, the Portuguese Institute of Sea and Atmosphere said. Landfall is expected around the Lisbon area or slightly north.

This motion is expected to continue over the next 24 hours with a decrease in forward speed.

On the current NHC forecast track, the center of Leslie will be near the southwestern portion of the Iberian peninsula later today (AST) and move inland over portions of Portugal and Spain tonight and Sunday, October 14.

Leslie is expected to transition into a hurricane-force post-tropical cyclone during the next several hours. Weakening is forecast after Leslie moves inland over the Iberian peninsula and then dissipate by Sunday. 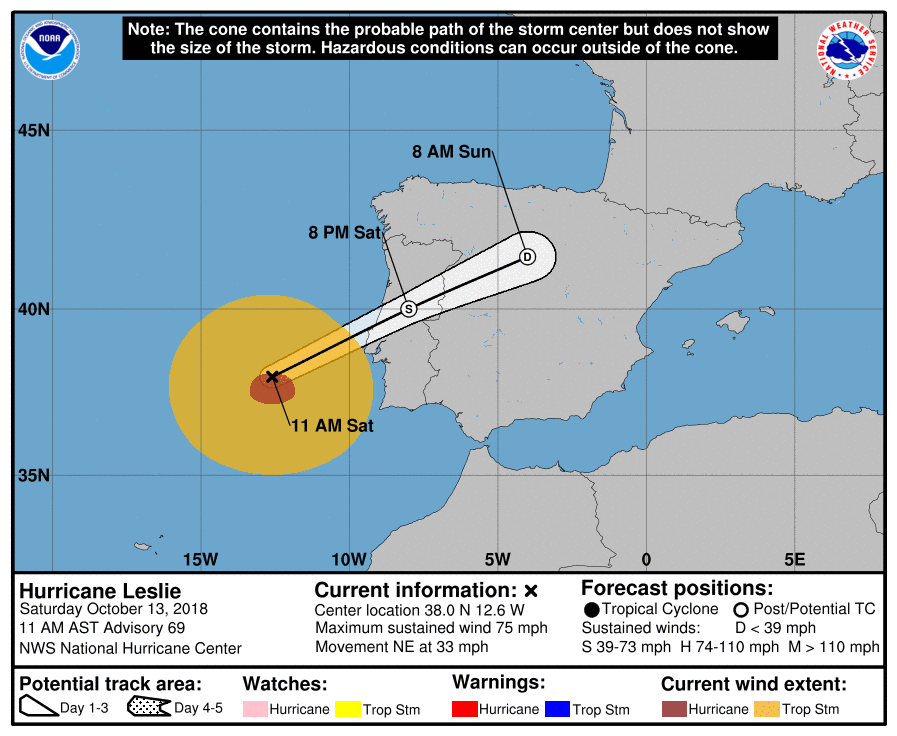 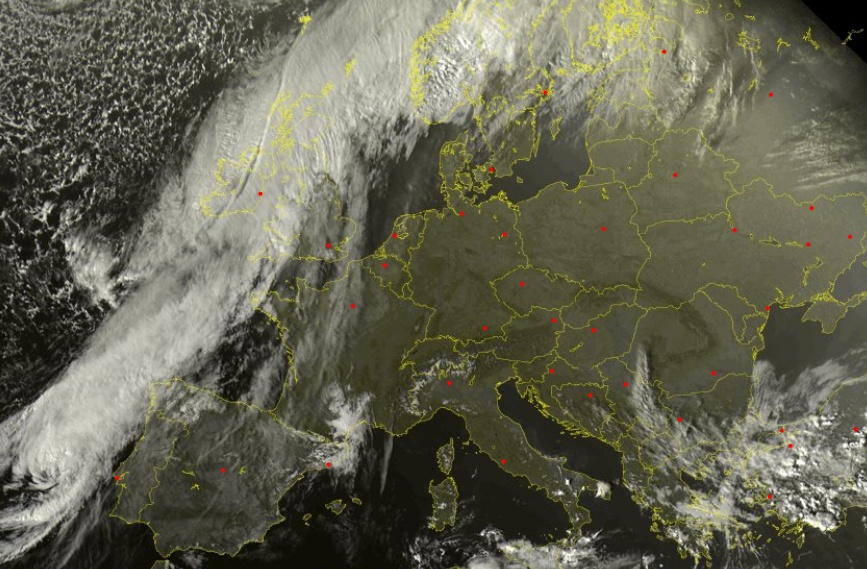 Leslie is expected to produce total rainfall accumulations of 25 to 75 mm (1 to 3 inches) with localized amounts up to 125 mm (5 inches) across portions of Portugal and Spain this weekend. This rainfall may lead to some instances of flash flooding.

Swells generated by Leslie will continue to affect the Azores, Madeira Island, and the Canary Islands through the weekend, and will begin to affect the Atlantic coasts of Spain, Portugal, and Morocco today and continuing into Sunday. These swells are likely to cause life-threatening surf and rip current conditions.

Leslie transitioned into a post-tropical storm Saturday, October 13 before it made landfall in northern Portugal as the strongest storm to hit the country since 1842.

#HurricaneLeslie, one of the most powerful to ever hit #Portugal, sweeps into the central and northern areas of the country, bringing down hundreds of trees and causing a number of flights being canceled pic.twitter.com/HQ4g0GuADl

"Post-Tropical Storm Leslie has defied historical trends, targetting Portugal and Spain with strong winds and rain as it approached Saturday, making landfall overnight. Not only is this a rare trajectory, but this storm is expected to bring unprecedented winds to the region, and potentially cause flash flooding," TWN meteorologists said.

Hurricane-force winds brought by the storm left 300 000 homes in Portugal without power.

With winds gusting up to 176 km/h (109 mph), it was one of the most powerful storms ever to hit the country.

According to BBC reports, the worst-affected areas were around the capital, Lisbon, and in the districts of Coimbra and Leiria. Aveiro, Viseu. About 1 000 trees have been uprooted and the main A1 motorway was among the roads temporarily blocked. mSome 1900 incidents were reported to emergency services.