Heavy rain and flooding are expected to make weather headlines for the end of the week across parts of Texas, Oklahoma, and Arkansas, NWS said. Meanwhile, significant river flooding continues across the Carolinas.

Pacific moisture associated with former Tropical Depression 19-E as well as moisture from the Gulf of Mexico combined to create an impressive moisture plume making its way into the Southern Plains.

At the surface, a low pressure system with a central pressure of 1 009 hPa was located about 144 km (90 miles) west of Abilene, Texas.

From this low, a slow-moving cold front stretched south and westward through West Texas, while a stationary front extended through Oklahoma and attached to a stronger cold front moving through the Midwest and Middle Mississippi Valley.

National Weather Service radars and surface observations indicated that moderate to heavy rain and thunderstorms were occurring throughout Oklahoma and portions of Texas. 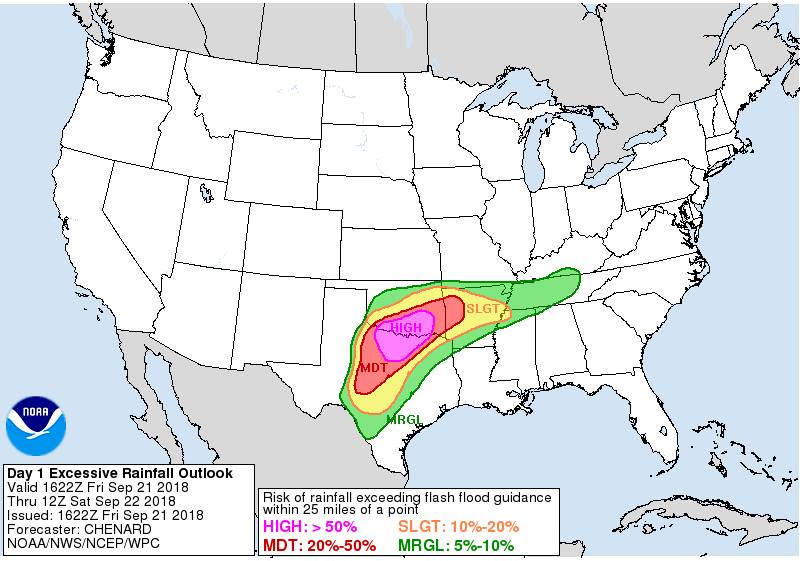 Other areas that will likely have enhanced rainfall are parts of western Washington state and the Upper Midwest.

A Pacific low pressure system is forecast to reach southern British Columbia Friday night with a plume of heavy showers ahead of it that would affect the greater Seattle area and mainly points north and west.

The rapidly developing surface low over the Great Lakes region early Friday will also result in widespread rain from northern Minnesota to the Upper Peninsula of Michigan, and thunderstorms extending from central Michigan to the Gulf Coast.

Windy conditions are expected across the Great Lakes region on Friday owing to the increasing pressure gradient from the strong surface low.