A powerful ice storm brought freezing rain and ice pellets to much of southern Ontario on April 14 – 15, causing power outages, fallen trees, flooding and an ‘almost unprecedented’ over 1600 collisions on slippery Toronto-area roads.

Ontario Provincial Police Const. Kerry Schmidt told CTV Toronto that there were about 700 reported collisions on Greater Toronto Area roads on April 14 and another 700 by on April 15, adding 200 more collisions on April 16.

"It has been an overwhelming day. Almost unprecedented in the number of crashes. Mostly single vehicles. Mostly property damages. No serious injuries thankfully to report," Schmidt said.

In the evening of April 15, more than 42000 customers in rural Ontario were without power, according to Hydro One. Toronto Hydro said thousands in the city were in the dark.

The #ONstorm continues to rage on and cause significant damage like these broken poles near Dundas, ON. Crews worked throughout the night and they’re back at it again this morning to restore power to over 66,000 customers. Visit our map for updates: https://t.co/q5Wq0lSjWT pic.twitter.com/vx4LP01mTs

There were also outages in the Windsor area, which was expected to get up to 40 mm (1.57 inches) of rainfall, with 60 mm (2.36 inches) possible in some local areas. The heavy rains led to flooding and downed trees.

Geoff Coulson, a warning preparedness meteorologist with Environment Canada, told that the rain could impact the morning commute on April 16, according to CTV News.

Toronto Mayor John Tory said clean-up crews were "well-equipped" to handle the mess, despite not being at peak winter capacity.

"We just have to hope the rest of the weather event is something that we can get through, and then maybe spring will actually be here," he told reporters earlier on April 15. 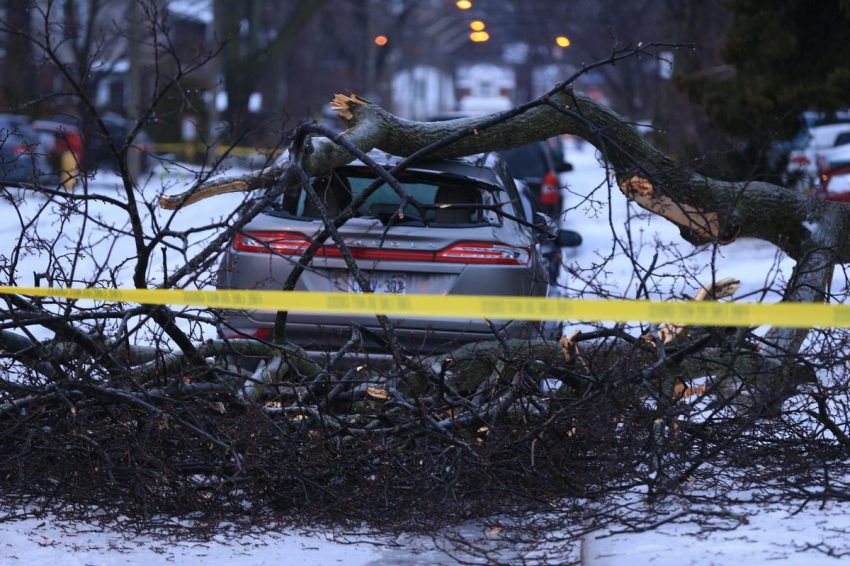 Toronto's Pearson Airport and Billy Bishop Toronto City Airport urged passengers to check the status of their flights before heading to the airport, as hundreds of flights had been canceled, including nearly all flights at Billy Bishop.

Pearson airport said late April 15 that while operations were "moving steadily," people should continue to check the statuses of their flights on April 16.

"Higher than normal passenger volumes (are) expected early this week as passengers are rescheduled for departure," the airport said on Twitter.

Featured image: A large tree was blown over on Southwood Dr. in the Upper Beaches during the weekend storm. Credit: Andrew Francis Wallace / Toronto Star